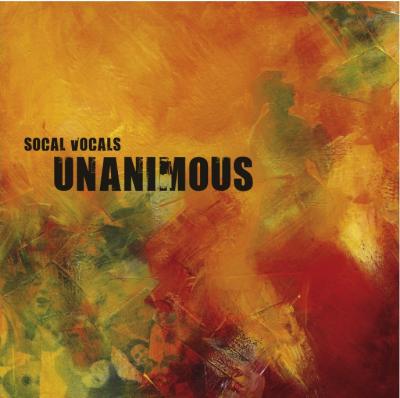 Unanimous is a very consistent album, and its better than average leads are always a pleasure to listen to. However, the SoCal VoCals' angst-ridden collection of pop rock songs can be an uphill walk to listen to in a single stretch. Thankfully, production gives tracks just the boost they need to creep into the good range. So even if the programming leans toward the mellow rocker, in the world of iPod playlists, there is much here to find its way to a Sunday morning mix.

Perhaps the most variable element to scoring was the match-up between the final work and the inherent demands of the song/arrangement.

Some songs are well-served by the SoCal VoCals' slightly artificial sound and pasted-to-the-grid feel. Movin' On feels like just such a song. The lead's charismatic delivery feels comfortable against the more plastic backgrounds. It's a sound that reminds us of the dance pop genre and it works.

But take the Queen classic Somebody to Love. The cut-and-paste studio perfection here feels lifeless and even the impressive efforts of the VoCals' golden-throated rock tenor cannot save this track from its merely life-like energy and absent dynamics. Queen's original breathed and swayed, and exuded boundless energy — a full color masterpiece. The VoCals' version seems more like a charcoal sketch, with all the parts in the proper place, but with considerably less vibrancy.

The studio has many useful and powerful tools. Thanks to them, we can all sing in tune and on the beat. But for some songs, that isn't enough.

Of their prior release, Get in. ROCK. Get out., I wrote: "Fun is the operative word for the SoCal VoCals." They appear to be aiming for something different on Unanimous.

My verdict on Unanimous is not. It's an excellent album, so the bottom line is scores and a review to match. But why? And what pushed it over the edge? And why was I stuck on "good" for so long, so on the fence about what to tell you folks? Guess it boils down to a well-made album that may fade from memory as soon as I put it away.

The technicals are good, and they hold up on multiple listens. Always a good tiebreaker. Also, the songs have some heft: usually, somewhere around minute four, the intensity picks up and there's some sort of climax inflection point. Yay blend, yay sound, yay dramatic movement. Blah on repetitive themes though, and on boring songs, and extra blah on songs that take four minutes to remind you why they're there in the first place. Can't tar the SoCal VoCals too thoroughly with that brush, though. The last two songs are departures, one in each direction.

All The Things You Are is maybe the most complete jazz song ever (don't take my word for it: I'm roundabout quoting Miles Davis), and it is a treat to hear it spring up here. This Singers Unlimited-meets-Imogen Heap arrangement is not to my taste, but hey it's an awesome song and they sing it well, autotune and sparkly studio sound and all. On the flip side of memorable, Somebody to Love has tons of energy and also slips into old school collegiate a cappella, what with its screamy solo and doo-woppy background. Not as good as the other stuff, but different, and different is good.

This group charmingly finds a Gabriel Mann song for every album. This year's winner is Crazy Ever After, The Rescues single that is both less interesting and better known than Gabe hits of years past. But with its recent soundtrack success, it's a natural choice. They sing it well.

So it's a very good album, weighed down by intangibles that seem to block a better listener connection. Hell, I can't decide — get one and see for yourself.

For all the fuss that was made two years ago for the SoCal VoCals' brilliant winning turn at the 2008 ICCAs, their recordings have never adequately captured the energy and charisma that the group brings to its live performances. Their sixth album release, Unanimous, as über-slick and polished and just plain ole "fine" as it is, is no different.

Lack of energy seems like a straightforward enough problem and doesn't really require much explanation. But more than just a reflection of the inner feeling, intensity, and passion of the individual members and the collective group in creating this music, lack of energy on an a cappella album is informed by a number of other controllable elements that aren't as dependent on the physical exertion and mental focus of the performers: the depth and texture of the arrangement, the attention to "feel" (via diction, dynamics, rhythm), and the sequencing of tracks. All of these are factors that can help elevate the lackluster or drag down the enthusiastic and all, to varying extents, are issues that plague Unanimous.

Arrangement-wise, the VoCals are never better than when Ben Bram is at the arranging helm. The layers in the backgrounds of Movin' On, Another White Dash, and Save Me (and to a lesser extent Thinking of You) offer a texture that is almost entirely absent from the incredibly staid arrangements — background blocks moving in unison rhythm, awkward word echoes, lyrics as background syllables (Feeling Good most excruciatingly), and generic "doo-bah" treatments — that plague a great many of the other tracks. An arranger needs to give the song some forward motion, and with the possible exception of Catherine Ricafort on Misery Business — which is undermined by some rhythm issues and odd mixing choices — no one but Bram has that down.

Feel or "groove", or the absence thereof, is a by-product of some of the aforementioned issues. Movin' On (by Bram) gets it right even if Allie Feder can't quite muster the soul of Elliott Yamin (her Katy Perry is better). But all of Janel Healy's belt on (You Make Me Feel Like) A Natural Woman can't save the track and its unison syllables and chords from sounding decidedly milquetoast. Even more egregious, Feeling Good is as cheesy as they come — a testiment to the fact that singing fantastically complex chords does not jazz make (see also: All The Things You Are, which cries out for at least a little dynamic variation, in addition to cleaning up its sloppy cutoffs within voice parts). Falling Slowly is a plaintive, simple song, so perhaps its minimalist treatment is warranted, but surely they could have done more with Crazy Ever After, a great tune with which the group does almost nothing, save for a A-plus guitar solo.

And then there's the repertoire choices, which place this album squarely in the "easy listening" category. The "edge" in Misery Business is really the exception rather than the rule, and pretty much from then on the choices are pretty much mid-tempo or slow. Taken individually, the better tracks might make a nice addition to an iPod playlist, but taken all in succession, it robs the group of any momentum as they move from song to song.

How then does an album with a great many flaws merit an overall 4 and mostly 4s and 5s in individual categories? Well, as noted at the top, the simple fact is that Unanimous is as slick and polished as they come. Though the live performance energy doesn't translate, the group's perfectionism does. The VoCals still have an overall sound that is rightfully the envy of so many other collegiate ensembles. A slightly more varied sound, a bit more textured sound, and a sound that comes as much from the heart as from the mouth and mind would make their recordings equally as enviable.

To order this album, visit iTunes or CDBaby.