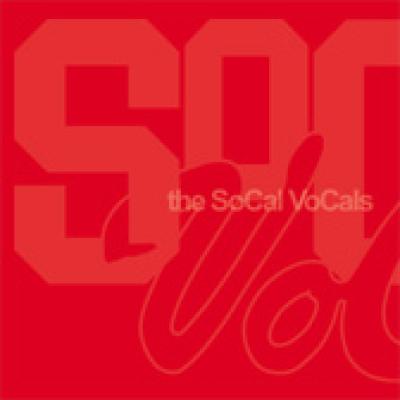 For a disc drawing on three years of work and 31 singers, the new SoCal VoCals release sure does a good job of sounding cohesive. In this case, I'm not sure that's such a great thing.

Too many of these songs sound the same, which tends to undercut the value of the near-repeats. Also, the best songs on the discs and the best performances overlap but don't meet up. Interestingly, the two best-written songs were Gabriel Mann's Slumber and Fire in the Hand. I've adored Gabe for a decade, but I can honestly say that I didn't realize those songs were his until well after I'd listened to them. They're great, really great, which is heartening.

Fire in the Hand also features the best performance on the disc, with a sterling arrangement by Stacy Burcham and a strong solo from James Snyder. The production and percussion shine best on this track. Four other songs seem to echo its mood, style and arranging. They all have their strong points, but it still seems like overkill. Wall-of-sound production loses something when it turns into wall-of-the-same-sound.

Other top performances: the sultry groove of 18 Wheeler, the shining simplicity of I Feel the Earth Move — a very welcome change of pace — and Ross Golan's nice solo work on Grey Sky Morning. Golan sings his heart out on this song but sounds a little overwhelmed on Slumber, which happens to sound a lot like the U2 single you've never heard. It also sounds a lot like Today, which has a slightly better solo but is a slightly weaker song. Elsewhere on the album, the production often outpaces performance. The tuning can't keep up on Don't Worry Baby, despite a nice touch with the chorus, Don't Let The Sun Go Down On Me is just too long, and This Love is blandly catchy without leaving any sort of permanent impression. Cherry Lips is a welcome change of pace, but its poutiness wears thin before the song is even over.

All in all, SoCal Vocals adds up to almost an hour of pleasant monotony. If you're intrigued by this disc, it might be a better bet to go buy a Gabe Mann CD. That's going to be my next move.

Collegiate pop-ternative mixed ensemble The SoCal Vocals are just shy of excellent. Good production (sometimes excellent), good arrangements, average to good soloists, good song choices. It's all pretty good. If the soloists had just bumped it up a notch, or if the backups had really explored the possibilities of phrasing and dynamics and left the overdone and over-enunciated "doogah doogah"-type syllables behind, I think The SoCal VoCals would have crested over to excellence. As it is, the CD remains enjoyable and far more than simply a yearbook.

The ever-present Mr. Gabriel Mann is credited with engineering, mixing, mastering, co-production, arranging (Today), and some excellent songwriting (Slumber, Fire in Your Hand). Normally Vitamin G is a trademark for absolute excellence. Here, things are, instead, very good. Perhaps the time, budget or talent presented insurmountable constraints. Maybe the other chefs of production became too numerous for this stew. There's solid stuff here, but not enough to pull 5s across the board.

Not that this had any effect on the scores, but it is interesting: The VoCals will sing "shit" in Cherry Lips but they shy away from "fuck" in 18 Wheeler. I'm not sure whether this is simply inconsistency or whether, as a society, we currently consider the f-word significantly harsher than the s-word. I live in NYC; the curse-o-meter here is completely out of whack with the rest of the known universe, so I have no idea. In any event, Katie Coleman's solo on Lips is pretty kick-ass. (We can all say ass, right?) Another solo standout is James Snyder on Fire In Your Hand.

Three years. 14 tracks. 6 producers. 31 different performers. Bottom line: The SoCal VoCals is definitely worth a listen, but I'm not sure that it's worth a buy.

The SoCal VoCals are back with their self-titled fourth CD, and once again, they've turned out a worthwhile listen. Good energy, tuning, arrangements, and production are the hallmarks of the disc, but there is still room for the group to grow before turning out a completely top-shelf effort.

From the second track, the group grabs you with their rocking sound and barely lets go for the rest of the album. The production (by Gabe Mann) is a fabulously active presence on the disc (check out Cherry Lips for a good example). Many of the voices are heavily processed, lending an edgy intensity to much of the disc, and the percussion is a solid driving force throughout. I say "the second track" because the group starts off with Underground, a Ben Folds Five cover which is quirky and fun and well-performed, but would have worked much better as a change of pace in the interior of the track list rather than as the first impression of the album. The arrangements (mostly by Stacy Burcham and Bryce Ryness, who were so prevalent on V3, The VoCals' previous release) are varied and interesting, and the soloists are generally strong, with a good ability to let go and wail.

To prove that they can do more than simply rock out, the group shows off some nice tender moments, especially on Grey Sky Morning and the opening of Slumber, which then builds to a rocking peak. Slumber is one of two tunes originally penned and performed by Gabe Mann, and it's a pleasure to hear The VoCals continuing to cover his music (he also arranged Today). This Love is a great track with good energy, a fun arrangement and a well-performed solo from David Rakita. Amy Thomas also turns in a couple of strong and ballsy solos on 18 Wheeler and I Feel The Earth Move.

With all these positives, there are still definite problem areas for The VoCals to work on. Sometimes parts are sung too prettily and carefully to match the intensity of the track around them when they're not distorted (some female parts in Delicious Surprise, for example). Sometimes the arrangers go overboard putting lyrics in the background parts apparently just because they think it's cool to have them there. Pinball Wizard is the worst offender in this category with horrendously obnoxious moments like "That Tommy loves his pinball!" and "Here comes the bridge!". Grapevine's soloists seem a bit out of their league, with some oddness going on in the middle third of the arrangement, too. Sometimes I hear good performances that leave me cold, when the group seems more concerned with how good they sound rather than seriously tapping into the emotional core of the song and really bringing that to my ears.

I'm excited to hear how the group can develop and grow by their next CD, but in the meantime, The VoCals' latest release is clearly a strong effort. One to be proud of. One to check out and enjoy.