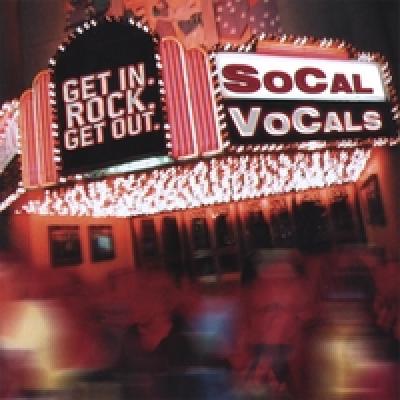 Explosive energy fuels this new album from the SoCal Vocals, perhaps even enough to earn it an all-capitals ROCK as a moniker. On first listen, the album blew me away with its punch and panache.

I love the mood of this disc. The song choices and the straight-up delivery. This disc is not ashamed of its Styx and Paula Abdul or its Journey, even if the group members are probably all too hip to listen to the originals. Unfortunately, on second, third and fourth listen the album doesn't sound quite as good. Once I got over my initial buzz, I started to hear sketchy tuning, "natural" (read: patchy) sections of blend, and solo shortcomings. Alone particularly stands out in this regard — musically, it doesn't really stand up once you get past the dramatic dynamics. But hey, at least it had dynamics. That's more than a lot of groups can say.

This seems a good time to sing the praises of Rebecca Melocik, who seems to deserve a big share of the credit for this album's strengths. She contributed a half dozen hard-hitting arrangements, along with a great, Patti LaBelle-esque solo on Love Potion #9. The SoCal VoCals really woke that song up, overcoming its long history as an oldies radio stalwart. Some of the other transformations only start to make sense once you read the liner notes — for example, who knew that the acappellaverse's own Gabriel Mann had remade Eye in the Sky? I will personally always associate that song with early '90s Duke Pitchforks, but apparently it has a little more currency than I give it credit for. Enough that Gabe would cover it and the SoCal VoCals would cover him covering it, anyway.

RARB's own Corey Slutsky also deserves a shout-out for his setup on Don't Stop Believin'. That song always seems to walk a fine line between success and disaster, but the performance on this album definitely tilts toward goodness. I also liked their treatment of Love You Madly — but as has been said before, Cake is almost always a good idea. Period.

Anyway, it's a good disc. A little more rehearsal time and/or a little more production clean-up, maybe it could have been sublime. But there's plenty enough talent and studio magic to get most of us to tune in as is.

Decade-defying madness. That's what the high energy SoCal Vocals are up to on one of my favorite titled releases, Get in. ROCK. Get out. Seriously. Check out the track list. Love Potion #9 on the same CD with Journey and Styx classics, a sweet rendition of 80s chart-topper Eye in the Sky and then Thicke's funk masterpiece When I Get You Alone. Bold, playful programming always wins points with me.

On the negative side, the SoCal Vocals sometimes make the mistake of taking on leads that the best of us would have a hard time living up to. How many singers can cover Steve Perry and not fall a bit short? It's not so much that you hold the soloist responsible for failing to be superhuman, but you might assign some blame to the group/music director/producer that allows that song to make it on to the CD. Understanding this is one reason why Eye in the Sky kicks ass and Don't Stop Believin' is just a good try.

No review of this CD is complete without a mention of the arrangement Styx Medley. (And it makes for a nice segue, too.) It's fun. It's creative. It shows off the soloists nicely without asking them to live up to everything tenor-god Dennis DeYoung did in his heyday. I know this is a pretty unimportant detail to compliment, but I really loved the vocal trill at the beginning of Sail Away. I loved the texture in the sopranos' echo response to the "Domo Arigato" section. I loved the comical use of the word "thanks" in the backups. Sometimes the little things go a long way. It actually shocked me how few arrangers even attempt this kind of creativity anymore. The arranging ménage et trois of Aaron Fischer, Rebekah Melocik and Dan Payson-Lewis officially have their bragging rights. (Also, if this group can't blow the audience away with choreography on this track they're really wasting a great opportunity.)

I frowned on the Alma Mater because it landed out of tune on a few chords and because it didn't really seem to mesh well with Tusk, but in fairness, the excellent energy with which it was delivered pushed it back to the bottom of average. Ratings aside, it still felt pretty forced.

Fun is the operative word for the SoCal Vocals. They hit a few real highs and they rarely drop the ball. Fans are sure to love it and the aca-ficionados might enjoy the creative programming and standout tracks.

Get in. ROCK. Get out, the latest album from the USC SoCal VoCals, delivers in the way that an "American Idol" finalist might perform on "Rock Night". Though the kids (mostly) have chops, you're ultimately just listening to v2.0 of a striking original; seldom do you hear something new, fresh, innovative. But they sing songs you like, the bloopers make you laugh, and every so often there's a performance that you'd like to hear again. Not necessarily something I'd aspire to, but apparently millions of rabid teenage fans disagree with me.

The trick with Get Out... is that Gabe Mann's strong production work and the VoCals' general competence disguise the fact that while this is great singing, it's not particularly great a cappella. The general formula is repetitive verses favoring the syllable "ba" that then switch to catchy choruses, often slathered with heavily distorted, well-tuned screaming. Sometimes it works — the wailing on the choruses of Alone might be the only collegiate cover yet to do Heart justice. Sometimes it doesn't: the opener's plinky verses (a cover of a pop/R&B sampling of Beethoven, if you can follow that) can't be saved by the nice energy of the refrain. And how does a group that can pull off an epic Styx medley and phenomenally atmospheric Eye in the Sky decide to include Love Potion No. 9 alongside? Singers this good deserve better arrangements, consistent repertoire choice, and forward-looking artistic vision.

My colleague Rebecca described the VoCals' last album as "pleasant monotony". You can find more of the same here, and it's probably enough for idle fans if not a nitpicking reviewer.

To order this album, visit the group's website, Cdbaby.com, or the group's Myspace page. Questions or comments may be emailed to the group, or mailed to: