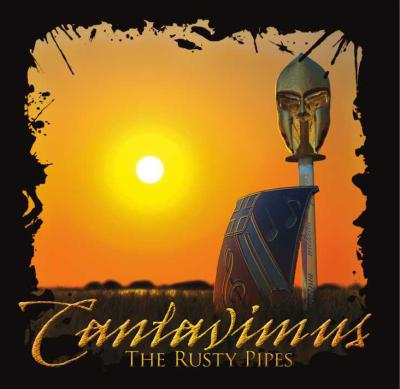 The Rusty Pipes, a co-ed group from Rensselaer Polytechnic Institute, have delivered a very sturdy and satisfying recording with Cantavimus. Filled with some hidden gems, the group attempts to make a fairly bold statement with the translated Latin title "We Have Sung". It's not a declaration that they sing really well. Just that they do sing. I can get behind the honesty in that.

The musicality is that of an average group with a few strong soloists, decent tuning and an adequate bass section. Nothing spectacular, nothing that's above the ordinary. Yes, it's difficult for tech schools to have strong music training. I get that. The Rusty Pipes are doing a great job of getting over that obstacle. As my boss, who is an alumae of the university would attest, anyone with artistic ability who can cultivate and explore that avenue at an engineering school should be commended. And I do commend them.

The album is a high "3" for me. They line up all of the potentialities to great accord. The arrangements have a pretty good arc. I actually loved the opener What Goes Around.../Rehab for its ingenuity and engagement. The production may not be mind-blowing, but it's consistent considering the number of mixers involved with the process. The soloists give it their all. And it features a great mix of styles. What the album is missing is a little more heart.

There are three standout tracks on the album. The first is For the Widows in Paradise as featured on the downloadable version of Sing: Sunny Side Up. The choral singing is on point. I love how they pass the solo line through the various voices with nearly pristine consistency in terms of timbre, quality, and ability. The song simply moves you. The second is the cover of The Hush Sound's Wine Red. Arranger Brian Lewis has created a richly textured wall of sound that soloists Taylor Pruitt and Greg White have the time of their lives singing over. The song is the epitome of vim and verve. Many the Miles is the most passionate of the offerings and I'm truly grateful for that. The track is the first time the listener gets a glimpse of what The Rusty Pipes can produce.

The standout soloists are Johanna Carroll on the Corinne Bailey Rae stunner Like a Star and Michele Viani on Many the Miles. Both Carroll and Viani achieve this hyper-passionate smoky mezzo-soprano that is mesmerizing. Carroll offers not the prettiest of sounds, but her innocence is indicative of the original without being strictly imitative. She could have been a little lighter to get into the true pathos of Rae's vocals. But me likey. Viani is a star in the making. Having not heard Bareilles's original (I know, right! Shoot me now!) I can only say that she clearly makes this song her own. She gives the track a deep emotional flair that's not over the top. It just is.

What I don't like (other than the nearly horrible rendition of All I Ask of You) is the propensity for the tracks to just end. There isn't a lot of diversity in arrangement styles, so all of the songs begin to sound a little stagnant and incomplete. Not horrible, just not a very engaging technique to use over a full album.

The Rusty Pipes should continue to work on fundamentals and try to stretch their capabilities even more — to not be afraid of being different — a rocking and inventive choral group. That way they can take better advantage of their studio time. Working with former RARB reviewer Joseph Bates as recorder and editor is a giant step forward.

This isn't a must-have album by any means ... but the average a cappella head should really enjoy about half of the tracks.

Cantavimus is mostly good. They've tapped some terrific a cappella gurus to shape their sound (Cannon, Boyer, Sperandio, Bates — most of the usual and talented suspects). The arrangements are decent, with Foolish Games sounding more than decent, and more like a bit reinvented (and definitely re-imagined with its intense softness and control). Soloists hold their own and sound appropriately matched to their leads. Greg White brings a fresh and gorgeous sound to Linkin Park's Shadow of the Day, and Amy Latten adds a beautiful color to Avril Lavigne's When You're Gone. Michele Viani is a capable Sara Bareilles stand-in on Many the Miles, and Taylor Pruitt and White make Wine Red really sparkle. Not too much to gripe about, really, but nothing amazing, either.

Aside from vocals, one of the big differentiators I've found between college and pro groups is the execution of a cohesive, well-planned album. The Rusty Pipes make a somewhat common misstep on Cantavimus with the inclusion of an everybody-knows-it Broadway tune (All I Ask of You from "The Phantom of the Opera") in the middle of their pop/rock album. In addition to musical theater hits, other groups have made similar misfires with Disney tunes and sitcom medleys, and these songs always stand out in the wrong way nestled between modern radio artists. View your album like a book; if there's an off-topic chapter, would you still include it? Perhaps there's some room in an epilogue for something that doesn't quite fit, if it's truly wonderful. Otherwise, edit, edit, edit.

For the next go around, I hope The Rusty Pipes up the wow factor and give us some really huge numbers with a tighter focus.

RPI's The Rusty Pipes have created a technically proficient, easy-to-listen-to album with Cantavimus. That's not too much of a surprise, though, given the heavy-hitting names behind the boards for this album: it was recorded by Joseph Bates and mixed by J.Cannon, Ed Boyer, and Dave Sperandio.

The opening track, What Goes Around.../Rehab, does what so few medleys succeed at doing: linking two songs in a way that they actually tell a story. These two combine to a powerful dialogue and, more importantly, they do it smoothly. The transition from What Goes Around... into and out of Rehab is effortless and seamless; it's what all medleys should strive for. Kudos to arranger Poorna Shankar.

There are several other really strong songs here: Shattered (Turn the Car Around) is a solid overall performance, Wine Red has a really feisty energy thanks to soloist Taylor Pruitt, and the group gives Move Along a nice spin with a female lead.

Despite those great performances, the album has a few weaker moments that bring the overall rating down to a "4". All I Ask of You (from "Phantom of the Opera") is a technically solid performance — the tuning, soloists, and arrangement are all great — but the song's very overtly Broadway feel sticks out on an album of pop/rock covers. The group's arrangement of Jewel's Foolish Games uses some very distracting background syllables, where the group stretches out words from the solo line (e.g., while the soloist sings, "besides some comment on the weather", the backs sing "wea — " (pause) " — ther"). While I can appreciate the desire to use words rather than a simple "ooh", those words become distracting on this song. I found myself trying to figure out what the group was singing, rather than listening to the soloist.

Finally — and most difficult for me to articulate (and for the group to achieve) — I felt as though some of the songs here lacked a little heart. For the Widows in Paradise loses some of its intensity and fragility without a clear soloist, while Shadow of the Day could have been pushed to be even more haunting and mesmerizing. Still, though, those complaints are relatively minor, making this album overall a very pleasant listen, with good arrangements, tuning, and leads ... and a well-executed medley as well.