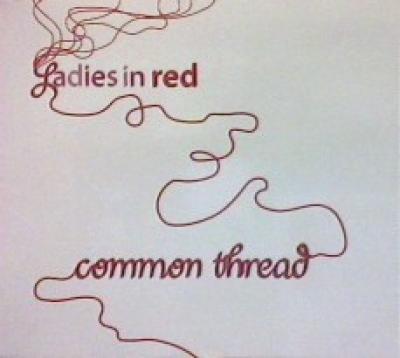 When the leads are great, everything else just seems to line up. If only we could capture and clone just those moments. Though North Carolina State's Ladies in Red have their inconsistencies, they do deliver the rifftastic, the rockin', and the vulnerable. With both pyrotechnics and authenticity, how can we not fall just a little bit in love?

A few noteworthy and interesting arrangements catch your ear (The Way I Am and Because being standouts). The easy, clean production choices keep the tracks fresh and sometimes add a needed spice (the flange on Vertigo, for example). Every lead offers something that glimmers, something original to them, though track scores closely follow those that draw us in and move us.

Blend among the Ladies in Red is noticeably better than most college groups, a sure sign of good leadership. The Ladies could nonetheless address themselves to pushing the boundaries on their arrangements a bit further. A cappella has such obvious potential to exceed the limitations of mere mortal instruments. Failing to realize that potential — simply imitating, simply cutting and pasting — threatens to engender unwelcome frustration, especially with such talented singers. Increased attention to dynamics could have pushed scores up a notch as well. And finally, a reminder to always show us only your best side: do what you do best and just that.

Energized, yet gentle, the Ladies seem to have begun to find their sound. It's an uneven journey, but despite any imperfections, Common Thread leaves us wanting more.

When I reviewed the Ladies In Red album Retrospection, I declared that the group likely has "a bright recording future". My assessment of Common Thread is that it would have been at least alright, had it been an EP.

If you like your female a cappella loaded with layers, wailing soloists, thumpy bass, and an overall foundation of sassy girl power, Common Thread isn't for you. Mainly, it's gentle. It's polite. It's restrained and controlled. And you know, hallelujah for a little softness from time to time in our loud recorded era! But, this softness is also counterweighted with some genuine weakness at the end of Common Thread, which takes away from the pretty fluffy cloud atmosphere the Ladies presented us in the beginning.

Let's say the group cut their record short after Tainted Love, which is nicely packaged in its fun arrangement. By doing so, we would have missed Vertigo, a decent (and original!) work, but which has distracting muddled diction from the soloist that makes it hard for a listener trying to make sense of the lyrics. Because would have also fallen to the wayside, which just sounds bizarre and out of place here. You Give Me Something features a shaky soloist who can't hit her lowest notes, and Love Song doesn't hold one's attention very long. Finally, we would have missed MJ's Will You Be There, whereupon the group tries for a gospel approach, but the effort comes across as sleepy-classical instead of inspirational. Power closers need, well, a lot of power.

Common Thread, in its duality of albums, is hard to score. Since the beginning is fresh and truly pleasant, the Ladies shouldn't get low marks. If the group wants to keep its restrained style, it's a welcome addition; unfortunately Common Thread is just too lopsided to really appreciate the group's clear abilities.

Common Thread is a great example of an increasingly common phenomenon in collegiate a cappella — an average group with enough production cred to elevate their sound to "above average". Liquid 5th does a solid job bringing out the best of what these nine ladies have to offer, yet the album as a whole doesn't really stick with you.

I feel like I keep giving the same feedback to groups as of late, but it bears repeating: your arrangements are perhaps the best tool you have to stand out in the crowd. What constitutes an effective and/or interesting arrangement live might not translate to the studio! The Ladies In Red haven't quite yet learned how to fill out their recorded sound, and as a result most songs sound thin and lack energy. L5 adds the right effects to make what is there sound pretty, but even the best engineers can't spin straw into gold.

Let's talk for a second about what works here, because these girls definitely bring something to the table. The Ladies have a pretty sound that works best on slower, mellower songs. The Way I Am comes off especially well with a silky smooth trio echoing the soloist at the chorus. Stepping Stone also succeeds with one of the better, more fully-conceived arrangements (contributed by Nate Altimari). The track incorporates ethereal textures and seductive "ah" punctuations that play well to the group's generally sweet tone.

The problem the Ladies have, and one that tends to plague other similarly pretty-sounding groups, is that they can't seem to push beyond mellow when the song calls for it. The climax of the final track, Michael Jackson's Will You Be There, should have made me want to get out of my seat to clap and sing along. Instead, without any real evolution in the arrangement or increase in energy, it just sort of fizzles. Sounding nice is great, but sometimes you've got to rock instead!

A fuller, more studio-ready sound might help this group to bridge the gap between "pleasant" and "noteworthy". My advice to the Ladies, and really to all groups, is not to be afraid to break away from what you do live for the purposes of recording. Remember, your audience is going to be missing the visual aspect of a performance when they hear you on a record. You need to make up for that lost interest with aural energy, by either singing like there's no tomorrow, beefing up your arrangements, or preferably both! Once these girls can do that, their next album will be a much more balanced and interesting affair.