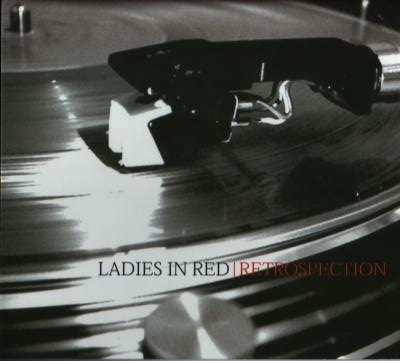 NCSU Ladies In Red' Retrospection is a revealing study in the difference between what makes for a great live performance but doesn't quite translate to the studio (Before He Cheats Bring It On Home To Me) and what makes for a truly enjoyable recording but, one suspects, might not do quite as well live (Mic Check Home Homeward Bound My Funny Valentine). Of course, the Ladies in Red, like Goldilocks, find at least one that's "just right" (Crazy ). But in the end, recordings are very intimate performances and Retrospection leans heavily towards what makes for an enjoyable CD over a high energy live performance. It's the right choice and it makes the repeat listenability score a strong one.

Ladies In Red do a bit better at the haunting ethereal sound than the more commonly heard rockin' chick thing. They're pretty adorable on light swing too (A Tisket, A Tasket), but this incarnation of the Ladies is comprised of gentle, lyric voices, and when the demands of song and arrangement lean toward the strengths of lyricism, as noted above, the match is a good one. To the degree they stray from that formula, the performance moves to the realm of wholehearted but not fully successful attempt.

Valentine is sung with some truly lovely phrasing, although I would have preferred just a hair less of a choral tone from the lead, who nonetheless spins as lovely a spell as that on the hauntingly poignant Homeward Bound.

Can't Take My Eyes Off Of You has a good idea in remixing the track, but the result goes between clever studio effects (particularly on the bah dahs) and a mess of re-harmonizations that don't sound creative so much as simply harmonically wrong. Crazy by comparison is a creative choice with a lead that rivals and occasionally exceeds the original, a truly rare accomplishment in collegiate a cappella.

There is a more timeless quality to Retrospection than is typical for collegiate a cappella. While it might not be the collection of blow-away performances or arrangements, it's likely to sound fresh and pure years from now when other groups sound dated. Fans will surely love this CD, and it's a good listen for others as well.

The latest CD from North Carolina State University's Ladies In Red, Retrospection, is a very good album, but one that unfortunately falls short of being great because of many inconsistencies.

Ladies in Red are "associated with the NCSU Music Department"; the evidence I hear of that on the recording is a group of well-trained singers, some of whom need to learn to control their vibratos when singing background. However, this also translates to some excellent soloists, such as a peppy Candice Gilliland on Before He Cheats and a beautiful Jessica Schwartz on Homeward Bound and Right To Be Wrong. Most of the other solos do a great job of reflecting the emotions of the song in their stylings, but a few fall short (Ready For Love is a powerful song and arrangement with an emotionally flat soloist).

More inconsistencies abound. Some arrangements are full in the right places with good use of syllables and block chords plus decorative lines; other arrangements are weak, like Can't Take My Eyes Off You with chords that are just plain wrong. (Yes, I'm a stickler for music theory but I speak of what I know.) Some songs are great arrangements but have a few distracting missteps, like the guitar effects on Right To Be Wrong.

Production is top-notch, coming from the veterans at Liquid 5th Productions. It's a nice balance of well-rounded parts, dynamics and pitch correct, but again — on a few songs the production was an exception to the rule of great production. I didn't care for some of the excessive auto-tuning on the basses, particularly in A Tisket, A Tasket, where the rest of the voice parts don't match the timbre stylistically (perhaps because they were sung more accurately?).

A few songs felt like filler, like Crazy (I think all groups should permanently retire this song unless doing something different) and Can't Take My Eyes Off You, which added nothing to the album. The rest of the album is a nice blend for an all female group with rich songs, strong soloists and a clean finished product. But here and there, elements mentioned above combine to keep the album this side of great.

A basic offering with few attractions and considerable stumbles, Retrospection needn't find its way into your a cappella library.

It's not uncommon for a cappella groups to open their albums with short, non-song numbers that pack a punch to hook the listener. Ladies in Red succeed with their Mic Check opening, a bouncy little ditty with an infectious melody and nice production effects. But after this gem, everything changes. Ladies in Red convey in their liner notes that they're "characterized by their wide vocal range", yet the soloists on Before He Cheats and Home are unable to comfortably reach their bottom notes. This preventable shortcoming happens to many female groups, whereas a duet, bump in the key, or proper soloist assignment from the start could eliminate this issue.

Another area pulling Retrospection down is the uncreative arrangements largely built on "oohs", "ohs" and "ahs". Transforming the instrumentation into diverse syllables is not only fun for the group and the listener, but is vital to convey punchy pop and realistic rock, keep rhythms accurate and interesting, and to provide a complimentary sound to the percussion and bass. Without the customary spread of a cappella syllables, the monotony level jacks up and levels off. There's also no credit to the original artist, making it more difficult to compare an arrangement to its original, and sad for the general etiquette expected (and required) of recording artists.

Happily, one particularly strong and memorable vocalist in the Ladies lineup delivers with a voice made to please. Lindsey Bryant, with her earthy voice that calls Joni Mitchell and Ella Fitzgerald back for a reunion concert, adds needed depth to multiple tracks, most notably with her solo work on Crazy and Wayfaring Stranger. Give this girl a listen if you've got the chance. Jessica Schwartz also adds great beauty to Homeward Bound, a haunting tune that's a definite high point on Retrospection.

You can pass on Retrospection, but keep up with these ladies' next move. They likely have a bright recording future.