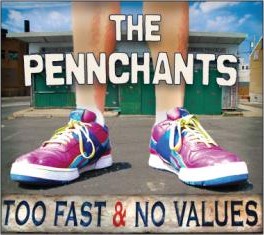 Call me a fool, but when The Pennchants boasted that they "revolutionized all-male a capella" in their liner notes, I was expecting, well, some pretty darn good music on their album. Sadly, Too Fast & No Values has rookie written all over it, sounding like a first release from a newly formed group of freshmen, not a group who has been on the collegiate scene for over twenty years.

The biggest problem on Too Fast & No Values is the arrangements, which vary between simple, awkward, amateur, and to start out the show, very vulgar. I know that We Built This City is just a kooky 80s number, but how on earth do lines like "You wanna lick my ... " / "Come on and suck my ... ", and well as an appearance by Mr. Clean in any way add anything of interest or humor here? Comedy and a cappella have a great relationship. But this ain't funny. Wonderwall suffers from abrasive syllables. Hooch is a sleeper. Summer of '69 is another amateur arrangement, with lyrics like "Here's a tricky key change!" and "We love Bryan Adams!" Oh boy. None of the arrangements sit as well as they could for one reason or another. Here's something for The Pennchants to consider: sometimes arrangements need to be a group effort to make them properly layered and striking, with each section offering their input for their range and talents. Members can also be critical with, "Ugh, let's not amp up the cornball factor too high." I wonder if every single Pennchant felt totally alright with some of the nonsense, especially the dirty nonsense.

Musicianship isn't the strongest here either. Overdone Africa suffers from shaky, weak chords, and at times, a lack of a clear downbeat. New Mother Nature/No Sugar Tonight suffers from the same tuning issues. All of the songs could use more energy, and a tighter blend. There aren't any killer soloists either, but at least no one fails.

What I do like, quite a bit, is their song selection. Too Fast & No Values offers light but fun songs, perfect for a long car ride or a chill backyard BBQ. There's nothing sappy here, and I respect that. I'm guessing these guys have a lot of fun in rehearsals and at gigs. If the group could just focus on fundamentals and working on making music that begs to be recorded because it's so unique and captivating, I suspect this group could make a heck of an album based on their personal tastes in music.

So you can pass on Too Fast & No Values, but don't pass on The Pennchants yet. Given their long group history, they should be able to pull off something more compelling in the future.

The latest album by The Pennchants of Upenn, Too Fast & No Values, harkens back to an earlier era of collegiate a cappella; one in which a bunch of guys singing, some sophomoric humor, and (as the group states in their liner notes) chutzpah was all anybody expected from the all-male group on campus. Indeed, there are dozens, if not hundreds, of all-male college groups that, were you to attend their live show, would treat you to just such a combination of theatrics. It's a cappella as gimmickry, not art. While live a cappella performance may be stuck for many in this bygone era, recorded a cappella has taken leaps forward. This album has a bunch of guys singing, sophomoric humor, and chutzpah, but these days that's not even close to enough to keep even a mildly literate aca-fan interested.

One look at the track list is all you need to know what you're in for. There isn't a single track on this album that doesn't fall squarely into the category of "massively overdone a cappella songs you never want to hear again". Ain't No Sunshine, Wonderwall, Summer of '69, and yes, (drum roll please) Africa. You don't even need to turn this album on to know that this group is behind the times.

Once you do start listening you'll hear not just a lot of familiar songs, but a lot of familiar arranging techniques as well. The background of We Built This City is a steady stream of "bow"s mixed with some "ooh"s and "ah"s, with one or two "you wanna lick my"s thrown in for good measure. There's that sophomoric humor I was talking about! It's totally random and completely distracting in this song (and that's coming from a 22 year-old guy! If I don't find that gag funny, who will?).

If you can get past the dull, awkward arranging, you'll probably be turned off by most of the leads. These men sound like karaoke heroes — all guts and no finesse. Kudos on the energy, but beyond that almost all the leads are totally devoid of natural phrasing, appropriate tone (most are very nasal), or in some cases the ranges to match the song (We Built This City has a handful of sour notes up top where the soloist just can't quite hang on).

What saves this album from being bottom of the barrel is the aforementioned energy, and a lack of any real cringe-worthy musical moments. Sure, the arranging isn't stellar, but the guys sing pretty enough on backgrounds to be inoffensive. Unfortunately, the fact that the basics of tuning and blend are OK just isn't enough to recommend this album.

My advice to The Pennchants is twofold. First, if you guys are just in this for the goofy fun of it, that's cool. You'll notice that almost all of my comments are from the point of view of an experienced a cappella listener, which most of your fans probably aren't. I would reconsider sending future albums in for review though, as the reviews are likely to be unkind.

However, if you guys want to get serious about putting out a competitive album, I would highly recommend some field research. There are a lot of groups that have learned how to be funny without sacrificing musical integrity. Take a listen to any of the high scoring male groups on RARB, see what you like about their style, and try to incorporate that into your own identity. Until you do you'll be stuck doing the same-old same-old, making music only your fans will really be into.

In the liner notes of Too Fast & No Values, The Pennchants humorously allude to the multitude of a cappella groups at the University of Pennsylvania, and explain how they are unique. I don't doubt that there's a ton of 'em (come on, it's a university in the northeast!), and I also don't doubt that they know how to one-up the competition. Too Fast & No Values is a strong listen, mostly because of the rich fullness of the block and the general high quality of the soloists. While they may not necessarily "revolutionize all-male a cappella", they're still clearly a talented bunch of guys.

This is one of those albums that really manages to sound like you're in the same room as a full ensemble of singers. You just want to crank up the volume and soak in all the overtones and harmonic intricacies that shine through. The block is well balanced and in tune, and generally sounds really strong. The album doesn't give credit to the producer, but whoever it is did a great job bringing the music to life.

The soloists are also strong, and together with the nice group sound, there are some great tracks on this album. Hooch and Africa show some nice passion, and New Mother Nature/No Sugar Tonight boasts strong, unique-sounding solos from Bennett Meier and Mike Yee. I was also pleasantly surprised with the generally overdone Title of the Song, which is expertly transcribed and well-sung. A few of the one-line soloists are a bit weak, but overall, it makes for a great closer.

The one thing that made me groan while listening was the occasional "joke words in the arrangement" gag. I never really find these funny, especially when they're repeated in every verse and chorus. Not that it's exactly sacrilegious to mess around with a song like We Built This City, but we don't need to hear "You wanna lick my ... " as a cadence thrice in one song. It wasn't funny the first time and gets even less so when you hear it again.

That aside, I really like Too Fast & No Values. The Pennchants deliver what you hear less and less of these days — some good, old-fashioned, in-your-face a cappella. It's not perfect — there are some tracks that lack in energy a bit or have weak arrangements — but overall, I think most listeners will be pleased with the quality of the material found here.