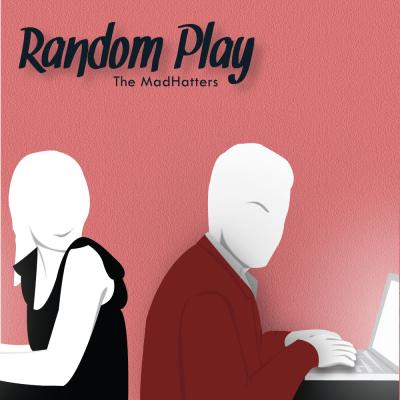 The MadHatters is a sturdy enough a cappella group. They are a confident and capable ensemble with soloists who have plenty of style, fabulous energy from all, and clear musicality infused in their performances. You can nearly see the group singing on Random Play, happily grooving with broad smiles, loving what they're doing in Madison with their sharp red jackets on display.

But frankly, most of the material on Random Play sounds a little too easy for this bunch. Given the group's deep lineup of frontmen and its solid background with good intonation and strong lush dynamics, the arrangements on Random Play should definitely have been more challenging. In Love With a Girl is the first E-Z Pattern Arrangement in this pack, with lots of repetitive "jow-now" and "jigga" action that's easy enough to learn as a casual listener. A similar example includes That Thing You Do, a simple number that merrily bops along without any real variation. I get the feeling the MadHatters sold themselves short, especially after listening to Swallowed in the Sea, where sensitive, polished vocals soar, crisp natural percussion keeps the song moving, and the swirling atmosphere the group has created commands our attention.

There are also some good ideas on Random Play that just needed more thought before cutting the album. Heard It Through the Grapevine is super sultry and funky, but the tempo needs to kick up a few notches to sustain the song for the long haul. Michael Jackson Tribute, a medley of his hits, is often quite gentle in its delivery — and who would describe MJ as "quite gentle"? Scarborough Fair sounds like it was recorded live in an acoustic setting, and finally offers an innovative arrangement, but it's hard to dig into the cool dissonances because of the lingering ring on everything. Combine these issues with the overall arrangement problem, and Random Play is frustratingly close to being so much better.

The MadHatters sound wonderful. I'd love to hear these talented guys really push the envelope and deliver a must-own album with one awesome track after another.

Random Play, the latest release by the UW MadHatters, is an earnestly sung album that generally won't disappoint the casual a cappella listener. It offers a nice mix of genres, some solid arrangements, and a pretty cool Michael Jackson Tribute that meets the challenge. The more experienced a cappella connoisseur, however, may not be so impressed with some other elements of the record. It's really a "crowd pleaser", but little more.

What's to like? Well, David Redick's arrangement of Army is pretty fun, especially the instrumental breakdown. Heard it Through the Grapevine has a really nice groove to it, emulating the Marvin Gaye classic quite well. And the five-plus-minute Michael Jackson Tribute has some great moments. Some soloists on this piece are better than others; the weaker ones don't add much value, but Drew Lake fronts a pretty spot-on version of Bad that would do the king of pop proud.

What's not to like? For starters, awful guitar solos with guitar-sounding distortion effects. I find these sections drain all the life and sincerity out of the tracks. They're totally unnecessary. Also unnecessary are some of the "filler" songs on this album. Tracks like Forever, Everything, and Swallowed in the Sea are nothing more than forgettable. They sound nice and all, but oft did I find myself itching to skip to the next track.

Some might also find that a few of the other songs are overdone or campy. I actually liked the MadHatters' rendition of That Thing You Do, but no one can deny that it's overly familiar. And, of course, if you've heard Bon Jovi a cappella one too many times, you won't be thrilled with track six of Random Play. It's not one of the better covers.

What most people will find is that this album is largely easy to listen to. Everything sounds relatively nice and in tune (save for the closer Scarborough Fair — was that live?), and the group's enthusiasm helps carry the songs forward. If you're having some sort of a cappella party, Random Play will provide nice background music. It won't win any awards but it holds its own all the same.

The University of Wisconsin's all-male group the MadHatters certainly has a lot going for it. The one thing these guys do significantly better than most groups, though, is to somehow capture their energy in a recording. Random Play just oozes with energy. And sure, the guys picked a tracklist of songs that are, for the most part, both upbeat and uptempo, so that helps — but the MadHatters make me feel like I know what it'd be like to see them live, because they've released an album that's just fun to listen to.

It is not perfect, though, and there are two things that dampen my enthusiasm for this album. The first is syllable choice. There are only so many times I can hear "jow-now", "dank-dank-dank", "ja-da-da", or "chigga" before that becomes all that I hear — not the soloist, not the melody of the song, just the syllables in the background. In Love With a Girl is particularly egregious, as are certain auxiliary lines in Livin' On a Prayer (and I'm not talking about their replication of the talkbox, which works really well here). Some of the best syllables in a cappella music are the ones that can't be transcribed literally, and the MadHatters would be well-served to try to sing ones that replicate sounds instead of ones that can be easily written down.

The second disappointment I have with Random Play is that the MadHatters' arrangements are very literal. That's great if you want to hear songs that sound like transcriptions of the original (especially In Love With a Girl, Livin' On a Prayer, and Swallowed in the Sea), but it doesn't make for a lot of surprises or wow moments. Michael Jackson Tribute is a great example: each individual song in this medley is well-executed and sounds great, but the transitions between songs are choppy. This is a group who has the tuning, blend, and energy to pull off a great mash-up or a song with a surprising countermelody underneath (and they dabble in that here, with snippets of Don't Stop 'Til You Get Enough woven in beneath Billie Jean), but instead, this tribute just becomes one song slammed up against the next one, and it's not especially interesting to listen to. I think the group is trying to do something unusual with Scarborough Fair, but these guys don't veer from traditional melody enough to make it sound like a reinterpretation; instead, some of the notes just sound like there are parts of the chord missing.

All of that, though, doesn't completely eliminate the fact that the MadHatters have put out a good, solid, enjoyable album. Even my arrangement criticism isn't a big deal if you're not super-familiar with the originals; songs like Heard it Through the Grapevine, Everything, Army, Forever, and That Thing You Do are definitely fun to listen to, and the soloists on these songs (and across the album) are all good. They pull in a guest vocalist to tackle the Boyz II Men/Mariah Carey song One Sweet Day, which is haunting and beautiful. There's certainly a lot here to enjoy, but I think that the MadHatters have enough strength to make an album that's more than just enjoyable to listen to. I think they can jump to "WOW", and I'd love to hear them try.

To order this album, visit iTunes, CDBaby, or the group's website.