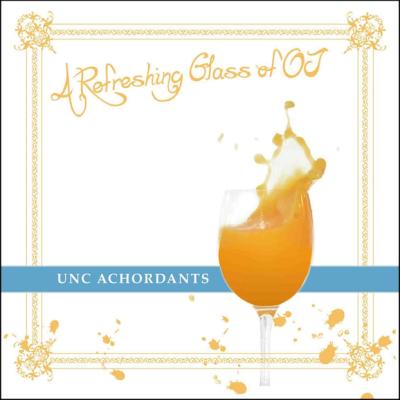 The UNC Achordants bring a testosterone-fueled energy to every song, giving them the kind of instant charisma that makes for exciting shows and great albums. Though some of their emphatic background syllable pronunciations are unintentionally silly, the group also hits a good many open vowels which blend nicely, adding to the group's power. Energy-wise, the Achordants just bring it, and that's the core of what makes for a good listen.

The arrangements blend elements of several collegiate a cappella sub-genres. The late '90s trend of "creative" but often distracting syllables is in force. Mixed in is a rich, open glee-club sound placed over vocal percussion that lies somewhere between processed and realistic. Several tracks have the kind of scat or instrumental solos that most collegiate groups have wisely avoided for the last fifteen years. But somehow, against all expectations, the group's full-on, non-stop energy magically holds it all together. For lesser groups, this would have been certain disaster. The Achordants just wash the whole thing in energetic charm, so we usually forgive even the album's cheesy or awkward moments.

If this album is any indication, the Acordants would be a blast to see live. And for those who just love infectious energy, this Glass of OJ is indeed a refreshing listen.

If these guys focus their considerable talents on rock instead of jazz, hit us with harder vp, and lose the goofy back-up syllables, they just might turn the corner between good-for-collegiate and full-on rockers.

One thing I've always liked about the Achordants is the group's passion to sing the heck out of everything, as though each note has a bold accent mark over the top and there's a crescendo waiting at the end of each bar. This kind of spirit continues on A Refreshing Glass of OJ.

The group has also continued its light-handed production approach, which, combined with the arrangements, really makes this album sound like throwback a cappella. If you like/can tolerate/can even appreciate lots of loud j-based syllables, big open "ahhh"s (even from the bass section), heavy and wet natural-ish percussion, and generally not a lot of tinkering in the final product, you'll find truth in the Achordant's "refreshing" claim. This is probably pretty close to what the group sounds like live and with their energy, diction, blend, and style, they certainly don't need a lot of tinkering to be enjoyable.

The arrangements on A Refreshing Glass of OJ will probably make or break this album for you. I had flashbacks of '90s a cappella while reviewing these songs. You're not going to get warm and radio-friendly here so much as you're going to get "joh joh"ed to the brink of madness. Sometimes it's really awesome madness, as on Teenage Dirtbag where this style adds huge amounts of personality to a song that definitely demands as much. It's also pretty cool on Starlight, where it adds a nice contrast to the gorgeous, lofty solo from Jorge Izquierdo, who peacefully floats above the aggressive background. Other times, harsh abrasive syllables just don't stack up; I've Got You Under My Skin really needs more warmth to capture its original charm. But good or less so, these arrangements are certainly memorable. Sadly, arrangers aren't listened in the liner notes; it would have been nice to see who did what.

If you haven't caught on to the theme here, this album is about personal preference. It's sung well and with great gusto. Will you like the Achordants' modern old-fashioned interpretations? You'll have to listen for yourself.

A Refreshing Glass of OJ by the UNC Anchordants is a clunky listen. It's not an unpleasant album on the whole, but this group has a decidedly uneven sound when it comes to groove and solo delivery. There are a few moments of brilliance when the proverbial stars align, but unfortunately they are the exception, not the rule. The hits and the misses come out to an overall average listening experience.

Let's start with the biggest issue: groove. For all the clear studio polish that defines the group's sound (clear, not effected, a purist approach), the Anchordants have a mighty tough time staying together on the beat. Whether the style is jazz, funk, soul, or disco, I counted numerous moments on this album where the drums weren't quite in line with the vocals. The basses also have a tough time staying on beat, which is made all the more apparent because of the section's rough tuning and blend. It's not unusual to hear a bit of this problem on collegiate releases (it's almost standard on high school albums), but it's prevalent here to the point of distraction.

Soloists have difficulty finding the groove as well, but that's just the tip of the iceberg. OJ features a few truly good solos — Jorge Izquierdo has the two best, with Starlight and Can't Take My Eyes Off You — but many more feel mismatched with the styles they attempt. Micah Caldwell's overly-proper baritenor sounds awkward and soulless on John Legend's Used to Love U. Kevin Wenzel has similar trouble with the funky Rehab but fares much better on the more straightforward Killer Queen. The sum of these problems is that the Anchordants as a group come off sounding very angular and forced.

The aforementioned Starlight is the one track where things really just seem to click. The solo is great, the arrangement plays well to the group's strength (big cascading, open chords), and the groove is simple enough to stay consistent and unobtrusive. There's also a cool, quiet breakdown at 1:45 that cleverly reverses the cascade pattern to neat effect. I'll also give the guys a bonus point for Nour El Ain: an unusual choice done well.

To reach the next level, the Anchordants need to pay more attention to the little details that will elevate their group sound. Sometimes moving your snare drum over a millisecond can make the difference between stilted and danceable. According to the liner notes, this group had four producers, and I wonder if maybe this is a case of too many cooks in the kitchen. Next time, these guys might benefit from having only one or two people at the helm who can bring a more focused musicality to the end product.