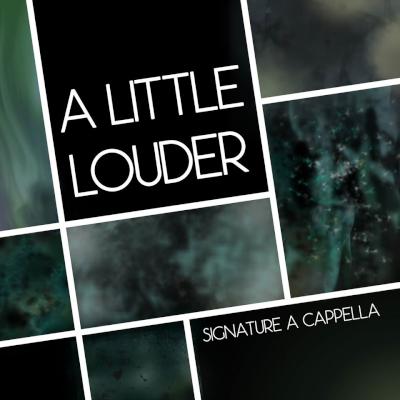 When Signature A Cappella focuses on one target — one power anthem, one emotional ballad — it's a bullseye for these ladies. But when the group adds too many musical ideas to accurately focus on, shown here in the form of too many mashups, medleys, and mix-ins, and we need a broom to tidy up this presentation.

The group sound from Signature A Cappella is really glorious — very confident and very beautiful across a few eras of Signature, and no manner of studio trickery can create bonafide talent. And if I may really overgeneralize female a cappella, you've got groups who sound thin and timid, and groups who have awesome blend and volume, and deliver their songs with plenty of passion. Signature A Cappella falls into the latter category, shown right out of the gate with Settle Down, featuring an arrangement and performance that start the fire for A Little Louder. For more delights like this, I direct you to How Will I Know, a striped-down version of the classic that really highlights this special group sound, with the ladies feeding off each other's energy in front of a cool arrangement that takes plenty of turns. I also appreciate the delicacy of Lovers' Eyes, a Mumford & Sons song that to me has a similar vibe to the beloved a cappella staple Samson by Regina Spektor, handled deftly here by sensitive singers who know how to really grow a song. On the upbeat end, what a fabulous, spunky rendition of King of Anything. There's much to commend here.

On the frustrating side, let's revisit the reviews for Signature A Cappella's previous release, Take Flight. A group is obviously free to record whatever kind of album makes the members happy, and if all of these songs really fill up the hearts of the singers, then awesome. But regarding the too many mashups, medleys, and mix-ins, note that all three RARB reviewers voiced this complaint in 2011. I wrote: "...there's no need to present the world's songbook." Rob Dietz wrote: "...the high number of tracks and the broad range of styles covered make for a pretty disjointed listen." Mike Marcus wrote that these ladies are "...throwing everything they have at the wall to see what sticks." And today, we've got more of the same, including at the title-level with Love Was Born This Way. Yes, groups are now writing mashup titles. I bet it's fun for Signature A Cappella to bounce along from song to song like a big living room singalong, but it's certainly a different experience to process all of these fragments as a listener. There's something to be said for a traditional song arc that allows the listener to stay put for the journey.

I'm ready for more care in the final arrangements of all the recorded songs, but I absolutely commend Signature A Cappella for the vocal prowess shown in A Little Louder.

There are a lot of songs on Signature A Cappella's second album, A Little Louder, and I'm not just talking about the thirteen tracks, or the two songs explicitly labeled as medleys. Over and over, the group throws in little snippets of other songs — Rolling in the Deep pops up during Rumor Has It, lines from All the Right Moves and Apologize close out Counting Stars, and Somebody to Love includes both the Queen and Justin Bieber songs of the same name.

So much jumping around from song to song makes A Little Louder feel a little unfocussed and formulaic — after a while, this listener started anticipating what song would pop out next, eliminating the surprise that usually comes from those Easter eggs.

In addition, some of these songs just don't work together, even if they were penned by the same artist. Cutting off the phrase "We could have had all" (Rolling in the Deep) so that the "all" follows the melody of "All of these words whispered in my ear" (Rumor Has It) sounds clever on paper, but Signature's execution feels abrupt and awkward. The All the Right Moves/Apologize ending to Counting Stars feels crowded. The Queen version of Somebody to Love is beautifully-performed — different from the original version — and the first soloist (likely Arianne Young from the liner notes) has a sweet voice that gives a genuine tenderness to the song. But the transition to the Justin Bieber song just doesn't flow; it's a case where the song would've been better off as one or the other, but not both.

That chaos of too many songs doesn't detract from some of the better moments here. How Will I Know really works well with Signature's all-female sound; the beginning is enchantingly treble-heavy, which gives an innocence and hopefulness to the song's lyrics. The Temptations Medley is one of the few medleys here that actually works — maybe it's the source material (Temptations songs all feel like medleys anyway!), but these singers really run with the easy, breezy vibe.

In the liner notes, director Samantha Hagemeyer writes of Signature's desire "to bring together multiple generations of Signature on one album". To the group's credit, A Little Louder does not sound like the work of multiple generations vocally: the blend, dynamics, and delivery all sound like the same group of singers. All of the songs, however, do sound like too many ideas without a single strong editor. I'd love to hear Signature continue to develop its tone with more focus.

Signature A Cappella's newest yearbook album presents the group's repertoire, which can be described in one of two ways: a cappella renditions that strongly resemble their source material, and medleys. Many medleys. The major problem with A Little Louder is not that it doesn't present new material; it's that it presents the same content in virtually the same way as the original songs they are based on, but with key parts missing, leaving listeners with much to be desired. As a yearbook album, A Little Louder has some charming moments but is predominantly meandering and incomplete.

I applaud Signature A Cappella for having creative ideas and attempting to combine songs for the sake of making something new and original. Without any new ideas, a cappella can be transcriptive and simply a medium for people to show that they can sing the notes and rhythms of their favorite artists with instrumentals that are actually voices. There is little artistry in simply showing that something can be done a cappella, because at this point in the history of contemporary a cappella, it almost definitely can. We have the technology to make it so! The studio is a wonderful thing, and the studio work on this album is good, bringing out the best of what each singer has to offer and balancing parts nicely.

But while I give the group credit for trying, general execution could use fine-tuning. When I listen to an album in which nearly one-third of the tracks are medleys, there is little sense of continuity. The focus jumps so often, it's hard to keep track of where you are as a listener. It's as if you're playing a game of Wheel of Fortune composed entirely of Before & After puzzles. That's not really Wheel of Fortune anymore — now you're playing Chain Reaction! Or this paragraph, which is now about game shows! Furthermore, when deciding on a medley, there needs to be more commonality than two songs of the same title. I've heard groups effectively incorporate parts of two songs named Maneater and two songs named Just the Way You Are, but these were done for musical and/or lyrical reasons. Signature's Somebody to Love takes two songs by the same title that could not be more different in tone, tonality, and mood, and forces them together by their namesake to form a medley that, after a glance at the tracklist, we didn't even see coming.

The arrangements presented here are simplistic at best and transcribed at worst, with only the occasional dominant-seventh chord to get past basic triad construction. How Will I Know and the Temptations Medley sound like they could belong to the Barden Bellas ... before Anna Kendrick shows up. The Queen portion of Somebody to Love is in the style of Queen everywhere from tempo to chord choices, but without a key element: percussion! In the case of Lovers' Eyes, if the choice was to make the song bare and choir-like, it was not strong enough to create something new, as the track drags without the rhythmic aid of the guitars and drums from the Mumford & Sons original. And, in the case of King of Anything, sometimes less is more, as the opening percussion not only takes away from the introduction in a way that would irk the Sara B faithful, but serves the rhythmic groove of the song inappropriately, specifically with the "ts ts" between beats one and two.

Some choices, such as the layering of Ain't Too Proud To Beg over a background of Get Ready, are effective. The "hey!" sounds in Settle Down elicit a compelling reaction. Each individual song in the Michael Jackson Medley is quite good and, by far, has smoother transitions than the other medleys. But typically, these choices are followed by a less sound choice, such as the lack of transitional material into Get Ready, again, causing the progression to feel forced. The soloists generally deliver the text with a sound tone and good diction, but seldom make choices to make these songs their own.

Signature A Cappella produced a true yearbook album, but could transcend this score with more sophisticated concepts and arranging techniques.