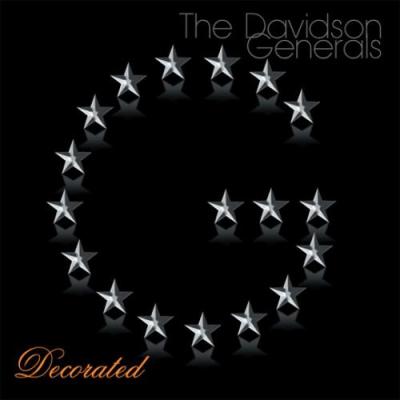 I remember being very impressed with my introduction to the Davidson Generals via Alpha Kappa Pella back in 2006 and looking forward to the group's next album. That album was A General Consensus back in 2008, but the group chose not to share it with RARB. Now we get Decorated which, even allowing for graduations and such, doesn't show the development and growth I would have hoped to see from such a promising ensemble. Indeed, the Generals have regressed quite a bit, and they're not helped by the reality that the collegiate bar for excellence is that much higher five years later.

The highs are few so I'll note them first: 257 Weeks shows a hint of variation throughout the arrangement and offers a nice jolt of energy that is woefully lacking almost everywhere else. It demonstrated for me that co-arrangers Keith Kullum and William Powers can do solid work even if the fruits of their labors elsewhere on the album are less than satisfactory. Similarly, Two Step, in an arrangement borrowed for Middlebury College's Dissipated Eight, shows flashes of what the Generals were once capable of, but it's also striking (and perhaps unfortunate) that it took an outside arrangement to do so. The opening of Where the Streets Have No Name is another bright spot. Whatever momentum and interest the Generals create by taking on the signature U2 sound in the intro is promptly lost when the arrangement abandons that atmosphere, switching jarringly to the blandest of "dum-dum" backgrounds.

Also, from a production point of view, the sound quality is lovely and the Generals are almost unfailingly in tune, thanks no doubt to the skills of James Gammon.

Beyond that, though, there are flaws — some major — at almost every turn.

The arrangements, despite a relatively consistent, polished, post-production sheen, are mind-numbingly uninteresting in almost every instance. Some, like Can You Feel the Love Tonight never even try to be anything more than a soloist singing against an endless string of either sustained power chords or plodding quarter-note power chords. Others nod in the direction of some level of interesting rhythm but ultimately revert back to deliberate, mechanical figures that become increasingly monotonous (Tempted being the worst offender). Also missing here is any sense of dynamics whatsoever — the album might as well have been titled "Volume Dial" as wherever you set yours is exactly and only what you will hear for the next 53 minutes. Lastly, there are the performances themselves, which overflow with earnestness but lack any sort of groove or feel in nearly every song. One or two soloists manage to distinguish themselves (Seyo Ayorinde as Usher comes to mind), but so consistently square and formal is the delivery of both solos and backgrounds that Counting Crows, James Taylor, 'N Sync and Squeeze all sound about the same.

They may call themselves "decorated", but as decorators they've opted for a roller in shades of off-white on a very bland and boring musical canvas. I wish they'd go back to a much finer brush and a lot more color.

There are hints of something good on Decorated, but this go 'round, the Davidson Generals just didn't bring enough ammunition.

The biggest thorn in Decorated's side is a lack of excitement, and sometimes any passion whatsoever. It sounds like the guys recorded Decorated the morning after a hard night of partying, though I know they are too professional and care too much to do such a thing; the music present just doesn't come across as lively. It's hard to keep a listener engaged through such idle music. One song could have improved a bit with a quicker tempo (Your Smiling Face), and another (Swallowed in the Sea) is an improvement because of the twirling-like-a-pinwheel arrangement that gives the tenors some exercise. 257 Weeks is certainly on its way to Lively Lane, and Two Step just turned on to Lively Lane and is picking up speed. But suddenly the band is asleep at the wheel for Can You Stand the Rain. Some of these arrangements, like super stagnant Walk Away, don't give the singers much to get worked up about, either. There's no quick fix to energy issues. You just gotta sell it from start to finish. And since the vocals weren't given the usual synthetic razzle-dazzle, the job at hand is bigger, and more important.

The Generals purposefully went for a lighter engineering approach on Decorated, avoiding the extra-processed, extra-filtered, extra-effected outcome many of their peers choose in the studio. It's largely just singing and light mouth drumming, with modest vp enhancement along the way, if you can imagine so little interfering. Problem is, a treatment of auto-tuning is still applied to many of the backgrounds, leaving a lot of the album sounding sterile and disjointed against the natural leads. Honestly, I would have preferred some intonation issues to stripping the warmth from the group. I know, and then I would have complained, "There are some intonation problems on this album." But I still would have preferred that sound to the odd Man vs. Machine we have now. To this end, the best part of Decorated is Two Step. Why? It's difficult to sing and engaging to listen to, and shows off some hardcore raw a cappella with a boost from the studio. Basically, it's a good balance.

These guys are likable, most definitely. But this album isn't too impressive. Let's hope they bring some badass cannons to their next battleground.

Decorated by the Generals of Davidson College straddles the line between "okay" and "good". This group makes a significant number of rookie mistakes, which are frustrating coming from a group with several albums already under its belt. These are simple things like tempo and dynamics: Swallowed in the Sea is so monotonous that individual notes just sound muddy; there's no phrasing here to help give the song any momentum or texture. Hangin' Around is slow and lacks energy, which is almost inconceivable given how bouncy and exuberant the original is. Tempted fares a little bit better, but the backs are completely monochromatic, leaving the song just feeling boring.

Song choice doesn't help, either. The Generals can't execute the phrasing or dynamics to do ballads well, so such slower tunes as Sunday Morning and Can You Feel the Love Tonight? don't translate well — extended chords just feel interminable without any growth or movement. The group comes closer on Where the Streets Have No Name — it's amazing how a small moving part can add so much to the group's ability to pull off a song, and while this track is still far from great, it at least moves enough to be an enjoyable listen.

Song interpretation is one thing, but there are some fundamental tuning issues here as well. The harmonies on The General don't sync up, which just sounds grating (and realize that this is the album's opening song — not the greatest first impression). And to make matters worse, soloists often sound flat (U Remind Me, for example).

Decorated isn't totally full of duds; some of the faster songs such as 257 Weeks and Two Step are listenable. Most of the rest of the album, though, just doesn't hold up, and the Generals have enough experience by now that they should've been able to avoid such fundamental issues.

To order this album, download a digital copy or email the group.