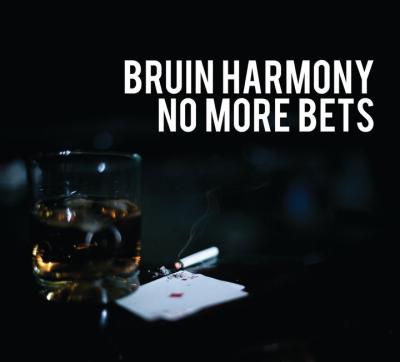 Produced and largely arranged by John He, the first tenor who auditioned and was initially rejected from Bruin Harmony, and then came to become their director and recent Executive Producer of the Los Angeles A Cappella Festival (what a loss that would have been!); edited by Joseph Bates (who also had an artful arranging hand in five songs) and Ed Boyer; and mixed by the singular Dave Sperandio, No More Bets is a clear contender for the collegiate album of the year.

No More Bets is awash in gorgeous arrangements that fully embrace studio technology, blending the roles of arranging, producing, and mixing until only a final, resonantly cohesive, artistic product remains. Dynamics, frequency range, emotion, lead integrity, tone color, style, rhythmic variety and feel — it's hard to find anything missing from this treasure chest of musicality.

Mother's Eyes alone contains more musical interest in its first thirty seconds than some entire albums I have reviewed. No More Bets is the result of both macro- and microscopic attention, and the effort has resulted in an album that may do nothing less than redefine what it is to create a collegiate album.

This isn't to say that the release is flawless. I didn't love the mix on Save Room. The lead sounds like he's in a completely different space from the rest of the group, which is jarring. Use Somebody, Down, and I Want You Back all demand just slightly more than their leads deliver, despite having killer back-ups. The incredibly powerful — nay, majestic — Ruled by Secrecy just didn't need the non-a cappella piano solo. Not that it ruins the track — it's quite good — but now Ruled can't be one of my favorite a cappella tracks. Still, all that feels like nitpicking because the album itself, as a whole and on track after track, is so laughably packed full with musical choices that it simply ought to be mandatory listening.

I can't recommend No More Bets more highly. I only feel sorry for future Bruin Harmony members; I have no idea how they'll top this. But for now, all they have to do is bask in the sure thing that is No More Bets.

Bruin Harmony is UCLA's only all-male a cappella group, and No More Bets is the group's first album. It's an impressive release for a group that was formed in 2006 and doesn't actually sound like a debut — there's a consistency of sound here, no major issues with tuning or blend, generally strong soloists, and an overall cohesiveness that makes the album easy to listen to.

A lot of that cohesiveness is certainly due to John He, class of 2011, whose hand was in the lion's share of the album here: he's listed as arranger or co-arranger for eight of the eleven tracks, he produced and co-recorded the album, and he did all of the vocal percussion. Oh, and his solos on Thinkin' Bout You and the bonus track Ruled By Secrecy (which also features He on piano) are fantastic. The album doesn't sound like a one-man project; instead, it does feel like a coherent whole rather than a compilation of individual tracks.

The arrangements and backing voices deserve a special mention here: Mother's Eyes is just phenomenally-performed (arrangement by the talented Joseph Bates, whose name appears several times here); the blend of humming, "oooh"s, and percussive grunts on Wavin' Flag makes for a song that has a great momentum and flow; and I Want You Back is a nice nod to *NSYNC without sounding too cheesy.

There are still a few things on No More Bets that show the growing pains of a young group. The first and most obvious is song choice: several of these tunes were overdone a few years ago and just feel outdated now (You Found Me, Use Somebody, Say (All I Need)). In addition, there are some shaky soloists here: the leads for Use Somebody and You Found Me sound as though they are scraping the bottoms of their ranges at the beginning of the songs. For Use Somebody, that makes for a rocky start to the whole album, and on You Found Me, it distracts from the arrangement which is otherwise pretty good. These two weak spots are particularly surprising on this album, where the soloists are otherwise all solid and — this is key! — not divas: soloists here sound great without stealing the spotlight from the rest of the group.

No More Bets is a strong start for Bruin Harmony, and it's certainly a pleasant, cohesive, and engaging listen, despite a few rookie mistakes.

Lately, I've been seeing lots of debut albums from groups that are well known in the a cappella community, but for a variety of reasons had not until recently been able to record an album. Some of them are breaths of fresh air, and some are tired repetitions of the same old, same old. I'm excited that Bruin Harmony's debut No More Bets is one of the ones worth hearing.

This isn't your typical a cappella album from the West Coast. Don't expect to hear massive show choirs backing up a lead singer — this ain't the SoCal VoCals (gotta keep the Bruin-Trojan rivalry alive). Bruin Harmony's singing can be described as any number of the following: crunchy, mushy, warm, and even sometimes fuzzy. This aesthetic is further enhanced by Dave Sperandio, whose mixing style augments and complements Bruin Harmony's source material. Even songs that don't sound inspiringly arranged (Down, Roses) benefit immensely from Dio's experienced hand with hip-hop and R&B music.

The more recognizable, mainstream pop covers are the least interesting and least effective part of the album. Down, Roses, and Wavin' Flag are ultimately forgettable and are, albeit very accurate, simple replications of the original. Bruin Harmony's strength seems to lie in songs with an atmosphere and a vibe that's a little more complex than "roses really smell like poo-oo-ooh". Thinkin' Bout You is a strong contender for best song on the album, with a very defined chill atmosphere, and a fantastic solo from John He to match. Andrew Olsen's only appearance as an arranger stacks up admirably against the rest of the material on the album, and could actually be one of the best on the album as well.

Likewise when speaking of atmosphere, I would have to be crazy not to write about Ruled By Secrecy. The (unlisted) closing track is one of the creepiest songs I've heard on an a cappella album, ever. John He again takes the lead with a Bates-He co-arrangement behind him. Also included on this track is an acoustic grand piano, which I'm sure someone is angry about. I'm not. The piano is featured upon its entrance, and slowly fades into the background to just become part of the atmosphere of the track. One of the notes in the background blends so seamlessly with the piano, you can hardly tell which instrument you're listening to anymore, and this lends even more to the mysterious ambiance of the song.

Other leads don't particularly stand out, other than Dustin Church's turn on Save Room. The solo sounds too imitative for my tastes, and eschews the reckless abandon of technique I like hearing from Mr. Legend for more concern with hitting the right notes. Even the end is a little too formulaic and practiced for my tastes.

It took me a little while and a little bit of conversation to figure out what bugged me enough about No More Betsthat I couldn't bring myself to give it a "5". While I don't mind how prominently Joseph Bates' arranging style pervades the album, I can't shake the feeling that I'm listening to a Duke Pitchforks album from a few years ago. While I appreciate the uniformity of style, it doesn't allow the group to develop one of its own. I love Bates' arrangements, especially how effectively he uses low, crunchy harmonies (as in Mother's Eyes and You Found Me), but I can't shake the feeling that I've heard it all done before. Bruin Harmony definitely has a sound; but without a style to match, I can't get a good enough feeling of the group's identity. Thinkin' Bout You, as mentioned before, is a notable exception and gives me a better idea of who Bruin Harmony really is.

I'm really proud of the Bruin Harmony boys (and fellow Soup to Nuts alumnus John He) for producing such a great debut album. My gripes aside, it's really very good, and only held back from being a really excellent album because it doesn't show me everything I want to know about who the group is. I'm glad No More Bets is finally out in the wild, and I can't wait to hear the group's next outing.