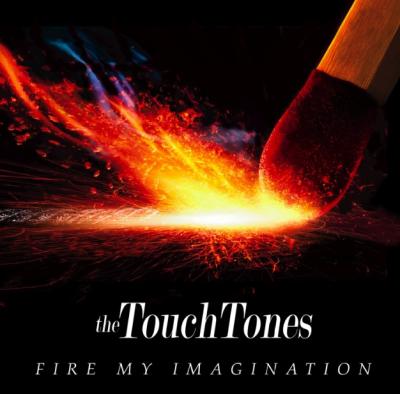 Fire My Imagination isn't the break-out album I was hoping for from The Touchtones. A lot of the same issues that made the group's previous release Wake Up Call mediocre are back again, except this time in a shortened EP format. While the second half definitely offers more punch and creativity, the overall package isn't going to capture your attention or your heart.

I spoke of "still-developing voices" the last go-around, and it sounds like we'll have to wait longer to hear these girls really rip in the studio. The engineers are boosting these softly singing girls over the fence with lots of turbo bass and drums. But the production can't hide the soloist really scraping the bottom of her register to pull off (I Can't Get No) Satisfaction. And we can't even hear the lowest notes the soloist is singing on Worn Me Down — she just disappears entirely. Of course, this should have been righted back when soloists were selected. Just because one can throw out a decent chorus doesn't excuse notes that are entirely absent because they're out of range. And actually, there are hints of range problems throughout Fire My Imagination. These are hard issues to grapple with, I know. During college I arranged Uptown Girl for my group, because I really flipping love Uptown Girl. But no one had the chops to pull it off, so it was immediately retired. (And I felt dumb.) If an arranger is unsure if someone can handle the solo, they can always just have an audition for leads before arranging for the group.

The second half of Fire My Imagination is certainly better. There's some sassy vocal work in Portions For Foxes. A very nice arrangement is offered by Robert Dietz with Forever, though it's delivered too lightly. Conversely, the shouting in Do You Remember is too aggressive, but it's nice to hear some solid energy.

I still have Heart of the Matter/Baby Can I Hold You on rotation from Wake Up Call. It's just so stunning, and I was hoping to be stunned with similarly emotional music on Fire My Imagination. Maybe next time ...

The Touchtones are an all-female group from Cornell. I was able to review the group's previous release, Wake Up Call, and even though I gave both albums overall 4s, it's clear that this EP is a definite step up. Fire My Imagination is terrific. There are three very familiar songs for me in (I Can't Get No) Satisfaction, Bad Romance, and Portions For Foxes, but I hadn't heard the other three before. At just six songs long, this release definitely leaves me wanting more.

This is "feel good" music that is full of energy. Almost all of the songs have a driving beat with a decidedly non-female-sounding kick drum, an octavized bass line, good soloists, and backup parts that are both interesting and effective. I was tapping my foot for the whole album. The sound production is also quite good for the most part, a rare exception coming from Portions For Foxes where the static from the snare drums persists in places for several seconds longer than it should.

The one song that did make me say, "Wait, what was that?" is Do You Remember. I don't know the original, so perhaps this exists there as well, but there is a strange drill sergeant-type voice at various places throughout the song saying things like "OK! Touchtones! Take one! Here we go! Take it away, girl! That's right!" It is really quite odd, and it took me several listens to start appreciating. In the end, though, I did become a fan of the song. The energy is undeniable and the mild rapping in the second half of the song is outstanding.

To sum up, this is a very enjoyable album which scores top marks in the "Repeat listenability" category. I heartily recommend it.

Before receiving this disc in the mail, I had never heard of The Touchtones. At first, I thought the group might be a brand new all-female ensemble releasing a tightly focused debut EP. I was wrong on all counts. Far from being new, The Touchtones were founded in 1983 as Cornell's very first all-female a cappella group. This is also not the group's debut album, though it is only its second. As for focus, the track list is all over the place: the juxtaposition of the Stones, Lady Gaga, Rilo Kiley, and Chris Brown is quite jarring.

The songs themselves are a mixed bag. (I Can't Get No) Satisfaction is probably the worst offender: the backing block hits like a machine gun, but soloist Gila Belsky doesn't deliver the attitude and seems way out of her element (though oh, she tries). Contrast this with Felicia Kennedy's take on Portions For Foxes, a truly owned performance with just the right mix of sweetness and anger. On the other hand, these backs sound great across the board. James Cannon is in top form here, adding just enough studio flair to punch up the more mundane arrangements while letting the complex ones shine, and you can really hear great energy from the backs on every single song.

There is also some solid arranging talent in this group. Katie Edwards gives us both the killer (I Can't Get No) Satisfaction and the smooth-as-silk Do You Remember. Taylor Chew's Bad Romance is also a lot of fun, but her replacement of "Gaga ooh la la" with "cha cha Taylor cha" is gratuitous and grating. Conversely, Worn Me Down and Portions For Foxes both tend heavily towards the mundane and repetitive. I also find it telling that my favorite track on the album, the Chris Brown megahit Forever, was not arranged by a member of the group. (Full disclosure: the arranger is Robert Dietz, a fellow RARB reviewer as of this writing.)

Ultimately, Fire My Imagination does show a lot of promise despite its inconsistencies. With stronger leads and a better defined musical identity, The Touchtones will definitely start getting some recognition.

To order a copy of this album, email Katie.