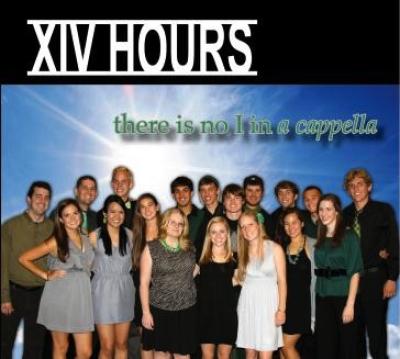 It's so uplifting to hear great high school a cappella. Listening to young singers developing their talents and committing to their craft is a delight, and if these performers go on to be collegiate a cappella singers, all the better for their anxious fans who want to hear them continue to soar. But moreover, XIV Hours members surely get a huge confidence boost by being in this group and have learned about working hard as a supportive team to make a polished product, and these areas will serve them so well as adults. Is this giving you the warm fuzzies?

If thinking about these points doesn't rouse you, the impressive music on there is no I in a cappella certainly will. These aren't basic SATB arrangements built on off-the-rack syllables and block chords. These collegiate-style arrangements require tremendous vocal independence and expression. If the singers on this album are nervous about owning their parts, they've fooled me. Boondocks is a solid, get-up-and-start-a-line-dance opener, but ethereal Follow Me Back Into The Sun is where this album really gets started. I love the mood XIV Hours captures for The Rescues' song, and the stunning, spitfire percussion only lifts them higher. This song is so full of life it's all but bursting. Just The Way You Are shows off both the group's ability to dazzle and the razzle-dazzle of the production from Liquid 5th. The Ballad Of Love And Hate demonstrates the group's ability for convincing storytelling, and guilty pleasure Shark In The Water makes a huge splash behind fabulous lead Mariel Murray. Jar Of Hearts is a head-spinning challenge of an arrangement for a high school group, but don't tell these kids because they don't need to know. The album's closer Nightshift makes an appropriate ending, with an interesting vocal journey played out for the listener, though soloist intonation is an issue. But really, only Firework hints of the young age of these singers — but hey, it's age-appropriate and fun. Nothing wrong with that. (Though taking away some of the overloaded high treble from the arrangement would help.)

Much credit has already been given to director Michael L. Meyer for the group's prior release, and boy, I wish I could give him a thumpy pat on the back and attend some of his Durham Academy concerts. If he keeps this up, he's going to give every high school a cappella group coast to coast something to strive for.

XIV Hours' first full-length album, there is no I in a cappella, is one of those rare high school releases that truly deserves to be judged against the big boys (or in RARB speak, "the general body of a cappella recordings available"). It's quite an achievement, showcasing both vocal prowess and professional presentation of material. The album has issues, certainly, but the overall impact is strong, mature, and definitely worth a listen.

The group's debut EP had a standout track in Earth, and so too does this album — the excellent Jar Of Hearts. I'll be honest: I hate the original, yet XIV Hours' version nails it by getting beneath the skin of Christina Perri's overly poppy piano rendition and into the unsettling reality of the lyrics. The group slows it down, colors in some of the chords, and delivers it with an intensity that makes me buy the idea of learning to "live half alive". These are some pretty heavy emotions brought impressively to life by some pretty young artists. That's something to celebrate.

I wish the rest of the album lived up to that level of excellence. The devil is in the details. The youth of these singers becomes apparent in their groove and solo delivery. Drums often don't quite lock with the backs, and most of the soloists have at least one moment where the melody goes a bit out of range or the delivery becomes stilted.

My hypothesis: these kids sound like excellent choral singers who are well on their way to mastering pop music, but who still need some time to develop. This choral excellence is evident all over the background singing on this album — the group sound is fantastically mature and accurate (especially the men; their sound is warm and rich beyond their years). The quirks are all in the contemporary elements — the groove and leads. Often when backs are great and leads are so-so, it points to a stronger level of comfort with group singing. I think that's what's going on here.

This is all good news though. You're not supposed to be a master of anything in high school — it's a time to learn! there is no I in a cappella is a fantastic first step on a journey that I have no doubt will in time reveal XIV Hours to be a world-class ensemble, and its current membership to be the future leaders of the collegiate singing scene and beyond. To tighten up the next release, focus on really finding the pocket and selling the leads in the studio. I can't wait to hear the result!

It's with a little disappointment that I'm reviewing XIV Hours' newest effort, there is no I in a cappella. I reviewed the group's debut album, The Acapelican EP, and was absolutely blown away by the professionalism and vocal ability exhibited by these prodigious high schoolers. Every element showed promise, from the excellent song choice to the soloists. It left me eagerly anticipating the next release, and I was very excited to be assigned there is no I in a cappella. Unfortunately, XIV Hours has not only failed to surpass the strong standard set by The Acapelican EP, it's come in under it.

There are things that work on this album, and things that work very well. I think the (admittedly production-enhanced) breakdown on Boondocks is effective. When the group is singing in block harmony, it locks the tuning and the group sound seems nailed down. The arrangements have sparkling moments, the cluster-laden backgrounds in Jar Of Hearts being a great example. Shark In The Water grooves along quite nicely, with awesome disco guitar backgrounds and the best vocal percussion on the album. Production is good, with most choices being made to enhance the group sound and make the singers sound better rather than masking them in studio trickery.

The main problem with the album is soloists. Songs like Firework, The Ballad Of Love And Hate, and Just The Way You Are crumble without the full commitment of the soloists. Now, yes, many of these soloists are good or average high school singers, but that's not the metric I'm measuring them against. I have to measure XIV Hours against collegiate and professional groups, and the soloists here don't convey the energy and all-out drive required to really sell solo singing. While there have been notable exceptions in the past (including XIV Hours' own Emma Kimmel, who delivered Imogen Heap's Earth with total dedication on The Acapelican EP; she appears again here on Nightshift), this has always been the main dividing line between collegiate and high school a cappella groups. Arrangements improve, top producers start working with high schoolers and a strong group sound can be achieved, but the fragility of the teenage voice is something that can't necessarily be swept under the rug.

So what's the solution? The answer probably lies in song choice. Firework is a tricky song, requiring powerhouse belting in the chorus and leaps between registers. It gives Katy Perry a workout singing it (check out some live versions, it wears her down), so it's pretty rough to expect a high schooler to match her performance. Same deal with Just The Way You Are; Bruno Mars has a breezy, light voice, but he's backing it up with real vocal technique. Regardless of the vocal range or difficulty of a tune, though, something a soloist always needs to consider is commitment. When you're "committing" your solo on a song to a recording (see what I did there? Eh? Eh?), you're essentially selling yourself as the star. Consistency, emotion and commitment ... these are the things that will help turn your solo from "meh" to "ooooooh". And that's what we all want; just look how many "o"s are in there.

The group's musical director Michael L. Meyer, talented multi-tasker that he is, has created a solid group that knows how to sing some a cappella. The Acapelican EP is a more concentrated effort, but there's still good in there is no I in a cappella.

This album is available at most online resellers, including CD Baby, iTunes and Amazon. For more information about the CD or the group, contact: