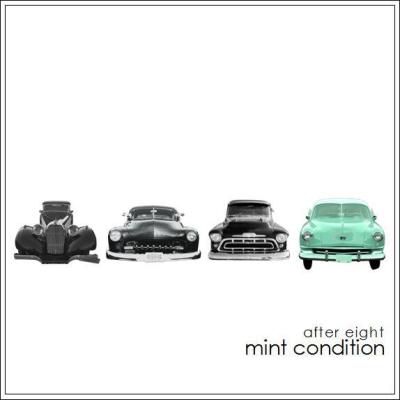 If good production meant good a cappella, everyone would be doing it.

OK, scratch that. Almost everyone is doing it, which makes reviewers' jobs a bit more difficult and requires even more attentive listening to hear past the polished shine to recognize what is or isn't going on behind the pretty sound.

Unfortunately, in the case of Mint Condition from After Eight, "isn't" is more prevalent.

Since the group is a subset of the Cornell Chorus, perhaps it's understandable that there is a trained quality to both backgrounds and soloists that often isn't particularly well-suited to these ladies' pop/rock repertoire. Perhaps it's not so surprising that there would be a formality to the singing that robs songs that should "rock out" of their groove and energy and renders them a bit too mechanical.

Both of these are serious issues on this album, but what's far less excusable — as it would be on any a cappella CD — and sadly rampant is uninspiring song choices, a lack of imagination in the arrangements, poor choice of soloists, and a complete absence of dynamic variation in nearly every song.

Truth be told, the repertoire issues are tied in to the energy problems and lack of dynamics. If the uptempo rock material truly rocked out and the slower material was more caringly crafted and intensely performed, there might not be a seemingly sameness to the vast majority of repertoire represented here that just becomes monotonous after a while. But nothing really rocks out here, and even an almost entirely choral, unique (from the rest of the album) take on Bon Iver's The Wolves fails to move me at all. Instead, almost everything gravitates towards a midtempo, plodding feel that never really once comes close to raising my pulse or giving any goosebumps.

But even more importantly, it's arrangements where After Eight needs the most help. Album co-producer and engineer Carl Taylor gives the group a low-end and some snappy vp, but it's in the service of arrangement after arrangement that sound the same. This group never met a "zho", "doh" or "noh" syllable they didn't like and it's so ever-present that I can't help but be annoyed. Most songs also seize on one basic poly-rhythmic figure that's interesting for about thirty seconds but quickly becomes boring when repeated ad nauseum, with little to no variation whatsoever. Bridges of songs — a chance to breathe new life into a song after two-three minutes and change the feel to allow for an explosion of energy into the final repeated choruses (more often than not) — are almost indistinguishable from the verses and chorus. Whether it's laziness or sloppiness or ignorance, this sort of arranging dooms any chance of my entertainment or engagement beyond the first couple of songs.

And then there's the soloists, an area which I am so hesitant to pick on because I realize it's harsh to critique the work of specific individuals. I should be clear that I realize all of the members of After Eight are talented ensemble singers. Their membership in the audition-only Cornell Chorus speaks for them. But a good classical soloist doesn't necessarily make for a good rock star. And whether it's pitchiness from the very outset (King of Anything), pitchiness later in the song (Life is a Highway), a too-limited range (When Love Takes Over), a pinched, nasality in the belt (Rescue Me), or an odd vocal timbre (Here with Me), After Eight's soloists just don't live up to the standard that is typically heard from today's collegiate groups.

I wish the news was better because all-female a cappella has taken a huge leap forward in recent years, and at least as an ensemble, After Eight would seem to have several of the necessary ingredients on paper. Unfortunately, Mint Condition did very little but leave a sour taste in my mouth.

Sometimes being a choir girl ain't such a bad thing.

After Eight is a truly musical group that pulses with strong dynamics and spirit — surely a result of the large ensemble singing the ladies of this group do within the Cornell University Chorus. The backgrounds on Mint Condition are a delight to listen to and are the star of the show. In addition to the real dynamics, there are strong real altos swimming down to the lower depths, which you'll hear and appreciate right from the first track, If It Makes You Happy (though with a bit of a production bass boost). Diction is appropriately snappy, or appropriately warm and loose as each song demands, creating great emotion. And that female bass purring on Criminal — how femme fatale! Such musicianship can be hard to hear in a lot of modern studio a cappella, and its very refreshing to hear it alive and well within After Eight. Liquid 5th did a nice job crafting Mint Condition to enhance instead of conceal these strengths.

Sometimes the background is so darn good, it shines a bright light on After Eight's biggest issue: weak soloists. Leads was also my primary concern with the group's previous release Ticket To Anywhere. Here, for example, the completely captivating background singers and arrangement for Here with Me earns a solid '5', but the soloist is below average. The soloist for the next track, When Love Takes Over, doesn't seem like the best fit for the song, either. Will You Be There? needs a total diva wailing and pumping us up, and we get far from this. Conversely, choral arrangement The Wolves (Act I and II) has no soloist, and the listener is treated to a consistent sounding, beautiful track, though perhaps a little out of place nestled in the pop sphere the ladies give us otherwise (it is definitely jarring to have Rescue Me belting out after The Wolves). However, it's certainly appropriate to include such a number given the group's choir background. So when things line up, the result is wonderful. My favorite frontwoman is Gillian Bader on Love's Divine, whose smoky tone carries Seal's song nicely. But overall, these soloists aren't convincing in their roles.

I like where things are heading for After Eight. But I do hope the group can add some stronger voices to the front lines, especially since the hard part — good musicality — is already in place.

Hot off the presses, clean, and pristine, Mint Condition lives up to its name ... sometimes to a fault. While there are moments of really good musicality and atmosphere, there are equally as many moments where the listener wonders, "Where's the meat?", to paraphrase a certain fast food chain's advertising campaign from yesteryear.

There are lots of things to like about Mint Condition. Song choice is hit or miss, but I heartily approve of the hits. Execution aside, any album with some Michael Jackson, Bon Iver, and The Flaming Lips on it gets my vote for good choices. The rest, however, don't go over as well. Rescue is lackluster in its selection and performance — there's no attitude to speak of on the track. Criminal, If It Makes You Happy, Here with Me, and the hits keep coming; they've all been covered to death in a cappella, collegiate and otherwise. But amongst the not so good, the good ones stand out.

The background singing is good on the whole. There's energy and mostly good vowel shapes, and some leads are particularly well-sung. Will You Be There? and Life is a Highway are both notable for their excellent and well-placed emotion in both the backs and the leads. The track sandwiched between those two, Love's Divine, also features a wonderful sounding soloist, but I can't get over how thin her voice sounds, when it has all the hallmarks of a deep, rich alto.

This brings me to my biggest gripe with the album. There is a thinness to most of the album that's baffling to me. This is an all-female group, yes, but it feels like there's a sonic hole right smack dab in the middle of where the altos and female basses would reside. The opener, If It Makes You Happy, has basses dropping down to the D in the middle of the bass clef and it's the thinnest note in the block, so quiet its overtones are barely audible above the rest of the backs. In any other situation, one would expect this note to saturate and fill the space below the soloist; here instead it leaves the soloist and the rest of the backs without a foundation to stand on.

I could speculate about why this is so pervasive — my first guess would be that the particularly tight editing either accentuated or necessitated it — but there are ways of mitigating most any such situation. This same thinness permeates the rest of the album. King of Anything is so bright and shiny that it becomes straining to listen to, and Criminal and Here with Me have a noticeable gap between the bottom of the natural voices and the octavized bass.

While there are moments of engineering I'm not partial to, there are others that are pleasant. Will You Be There? is probably my favorite song on the album because of the sonic space built around it. The lead and backs all move in a big expansive space that is built wonderfully from a spacious hall in the back to an intimate room at the front, letting the drums and backs stay big while the lead is still up front. The Wolves (Act I and II) is a beautiful song, and After Eight does an admirable job. Some of the cutoffs are a bit messy and there are some less than pretty mouth noises that make appearances on the track, but the build is beautiful and the emotion put into the backs is very good.

Why After Eight chose to put its better songs in the second half of the album is a question that I can't really speculate on. There is a significant portion of this album that's good, but the majority of the album is just ok. Combined with the overall thinness, I found that listening to some of the tracks, particularly those on the first half of After Eight, was a fatiguing experience. The second half is notably better, but overall it's not an album that I'd come back to.