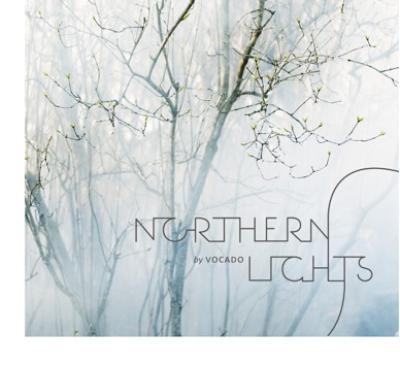 Though the traditional jazz sounds great from this Swedish sextet (what a knockout interpretation of My Funny Valentine), I think the potential past this nice debut album lies in the harder-to-define music on Northern Lights. The crux of this type of beautifully ambiguous music is certainly Sashenka — Wednesday night and Sashenka - Sunday morning. It's haunting, and thought-provoking, and these two points alone will engage listeners, never mind the fine musicianship. Spooky-sounding Innan isen lägger sig offers more of this interesting ambiguousness. Actually, many of the tracks — with hard nasal nordic vowels dripping with dissonance, and background singers coming and going in audio levels through dramatic expressive jazz phrasing — sound rather spooky (like My Funny Valentine and Lover's Dream). But when the tracks manage to slide around between genres, such as the Sashenka pieces — when combined, is it a ballad? is it not? — they ultimately give listeners the most. The vocalists of Vocado are fantastic, so why not keep exploring the gray areas of music?

Absent from Northern Lights is any straight-up feel-good, dance-around-the-room, stomp-your-feet music. This is largely somber, emotional music. And while sunshine is not a requirement for an album, certainly not one that holds its own like Northern Lights, the darker feel is saturating and doesn't make for everyday listening. It's a beautiful product, but there is much pain in the lyrics and long notes.

The liner notes are complete with translations and insights from the musicians. It reads like a personal journal, adding complementing intimacy and depth to the music the group recorded; between the music and the notes, one gets a real sense of Vocado's purpose and interests. How rare and appreciated.

Production is minimal here. The group aimed for "light, subtle and a bit mysterious", and Vocado succeeds with this intent. I think one shouldn't over-meddle with jazz, though a few moments up front sound too raw against the polished background (such as the whistling in Imorron...). Consistency is everything in our a cappella world.

Northern Lights has many strengths, and is more accessible than many foreign albums. I definitely recommend a listen.

From its title and cover photograph, I thought that Northern Lights was going to be a winter holiday album — and boy was I wrong! This debut album from the Swedish sextet[1] Vocado is a lovely year-round pop/jazz album with both Swedish and English songs.

Compliments to the group for the liner notes to Northern Lights. Songwriters and arrangers are credited, and with every song, one member of the group (or lyrics contributor Richard Pomfret) writes about the choice of the song or its inspiration. With the original pieces in Swedish, the group has included the translation of the lyrics into English. There was obviously care and thought put into this booklet, and it shows.

The same level of care went into the music as well; these singers perform with care and precision, and there are some lovely moments here. The album's centerpiece, the originals Sashenka — Wednesday night and Sashenka — Sunday morning, have a haunting ambiance that is just awesome (Sashenka — Sunday morning is particularly memorable, with a subtle hummed backing melody that grows in the song's final minute).

There's not a whole lot of diversity to what Vocado does, for better or for worse. There isn't a huge range of dynamics on the album (or on any particular song), and some songs (Coffee Time especially) get a little repetitive. The bass parts are mixed very low; even the bass solo line on Lullaby of Birdland grows almost inaudible, drowned out by the soprano parts.

Still, a lot of those complaints are just descriptions of what it is that Vocado does: these are hushed songs that occupy a very specific mood, and even the jazzier numbers have the same tone to them. Certain songs here — Kevlarsjäl, the chilling Innan isen lägger sig (awesome solo on this one!), and the shimmering Lover's Dream — are absolutely outstanding. Vocado's style may fit in a narrow niche, but these singers do very well there.

[1] There are six people listed in the liner notes to this album, but the group's Facebook page states, "Vocado — Sweden's Choir of the Year — is a young vocal group with five members between 26 and 29 years."

There is a lot to enjoy in Northern Lights, the first major release from Swedish vocal jazz group Vocado. The blend is wonderful, showcasing individual voices while still maintaining a strong group sound. Arrangements are often inventive and colorful, blending the raw vocal power of Scandinavian folk music with harmony inspired by jazz and popular music. Tonally, it's easy to hear a lot of Rajaton in here, with Vocado's similar six-person configuration (three girls, three guys), its inspiration in traditional music, and dynamic range. It's also easy to hear a lot of early The Real Group, with Vocado's use of close harmony, Big Band-inspired arrangements and Great American Songbook repertoire. So Vocado's main failing lies in the closeness with these groups; it's hard not to compare Vocado to its Nordic compatriots, and Vocado doesn't yet match these powerhouses in tone or style.

Unlike many other budding professional groups, Vocado does not have an image problem. From start to finish, I get a very clear idea as to where Vocado is coming from. The group may move from genre to genre, but its focus never wavers. While larger collegiate groups have the luxury of developing a strong group sound and some standout soloists, smaller professional vocal groups live and die by individual members. Vocado has six great singers in its group, and a lot of its successes can be attributed to the skill of the individuals making up the collective. However, it's a double-edged sword, and the smaller group dynamic allows any and all cracks in the foundation to be seen. Every ragged breath, every flat pitch, every uneven cutoff is on display.

Which leads me into the album's biggest failing: its production. The choice to go bare-bones was not necessarily a bad one, as it is clear that Vocado can lock chords with skill and precision. However, the whole album is a mismatch of tracking and live studio performance, and the end result does not help Vocado get its message across. There are moments when edits and patching together two separate takes can clearly be heard, and held parts often waver and suffer in pitch. I appreciate the noted absence of auto-tune and excessive overdubbing, but on the whole the production feels half-baked.

There are some interesting individual tracks on Northern Lights. The standouts, in my eyes, are the songs Sashenka — Wednesday night and Sashenka — Sunday morning. Wednesday night has a beautiful tenor solo and some gorgeously lush backgrounds; Sunday morning borrows chorale-based harmony, as well as soaring vocal lines that could be straight from Swedish traditional music. Lullaby of Birdland is less successful, with the feel being spotty and the vocal lines rushed. A more laid-back approach to swing in general could be very beneficial to Vocado, as any time the group goes into swing it has a tendency to be ahead of the beat, which in the words of Mr. Duke Ellington is "considered to be aggressive". It's less noticeable on songs with sparser melodies, but wordy lyrics like those in Lullaby of Birdland get rushed to the point of being a little silly. Lover's Dream's compressed vocal and trip-hop beat reminds me of a Bjork/Portishead song, and it is a little diversion that works very well with the whole of the album. Kevlarsjäl's backgrounds give it a nice propulsion, and help augment the beautiful solo. Finally, Innan isen lägger sig features some haunting vocal lines that really show the power behind Vocado's six vocalists.

Vocado is working with a full deck here, and it's refreshing to hear a vocal group that is more concerned with the pure power of the voice than with studio bells and whistles; Vocado's next step should be to find exactly how the studio can help them achieve the best possible sound. There's so much good here, and Vocado should be proud that it has produced such a solid first effort.