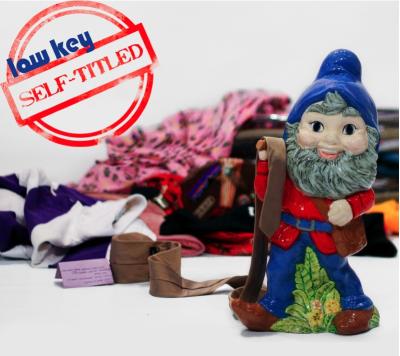 JMU Low Key follows up its full-length 2011 release Keychange with a six-song EP, Self-Titled, that is more of the same.

My fundamental issue with Keychange was that its two best songs stood in stark contrast to the rest of the album, which featured far too many basic arrangements, often limply delivered, with inconsistent vp and solosts of varying quality. Self-Titled may be shorter, but its issues are much the same.

The standout track is Sweet Disposition, not surprisingly chosen for the Voices Only 2011 compilation, featuring a complex, textured arrangement from Danny Morgan, with an impressive opening solo from James Rosenquist, a nice emotional build and peppered with little bits of variation as the song progresses.

By contrast, there is ... well ... almost everything else.

Happy is a misguided choice for an opening track, reducing the palpable, pounding emotion of the original to a painfully simple, aggravatingly vertical, moving-eighth-note-over-plodding-quarter-note rhythm, with boring block chords on the chorus that offer no edge and no energy despite the soloists best efforts to emote.

Right as Rain seems like a cute and jaunty idea in the first thirty seconds, but the arrangement goes absolutely nowhere and the slightly overannunciated solo (in places) annoys a bit in light of Adele's casual relationship with diction.

I'm slowly coming to the conclusion that Speechless just shouldn't be done a cappella because so far, none of the versions I've heard can come up with anything remotely interesting to do with the song beyond mostly block chords and unison rhythms. Low Key does make it slightly interesting at the very end, but it's too little, too late.

New American Classic gets some props for taking a chance with an arrangement that tries to interpret rather than replicate or transcribe the guitar and string-based original. It's not quite enough to make the track exciting, and the performance is a bit bland, but it's at least a step towards originality and creativity.

Unfortunately, the album closes as it starts — with a track that falls painfully short of the mark as it tries to match  its source material. Instead of the gospel-infused, funk-tinged fun of Sara Bareilles, we get an exposed syllable pattern that opens the song and continues (I believe) unchanged for a full minute. That figure is modified slightly for the chorus but then it returns again for the second verse, droning ever onward, sapping every ounce of energy as it goes.

To the group's credit, the production values here are a bit better than Keychange, and we know from both that release and this one that Low Key is capable of flashes of excellence. Perhaps instead of recording two middling CDs in such close proximity, they might take a moment to winnow out the mediocre and give us an EP or full CD that truly showcases only the best they can do.

This self-titled release from Low Key is a very similar offering to Keychange, including the same problems and successes, just in a shorter EP form.

The vocal assessment is one area that’s identical: a weaker group sound, but really captivating soloists throughout. When the group holds open vowels, one can again hear the kind of unsupported listlessness that plagued Keychange. Just start Many the Miles and you’ll hear this problem repeated over and over again, as it’s unfortunately built right into the background parts for scrutiny. It’s a real oddity, considering the leads have enough breath control to run total tricks all over this album — huge showy belting, scale runs, slides, everything — and too often the backs sound breathy and quiet, and worse, even bored. Individual parts need to be more purposefully sung across the board — even if you’re not singing a solo, someone is carefully listening to your part and wants you to sell it, especially in a cappella where syllables are so attention-drawing. So put on your tight rock star pants, Keymates, and consider your part a solo, even if you’re a soprano II or a baritone singing nonsense words. Because the instruments you’re replacing don’t sound breathy or bored. I suggest that Low Key play back recorded parts right after recording them to make sure they’re hot.

The album construction highlights the stronger tracks (Happy and Sweet Disposition) as our introduction, and closes on the most lackluster track (Many the Miles). Arrangements create the pros and cons here, since the vocals are very consistent (as described above). I’m particularly fond of both the arrangement and production work on Sweet Disposition, which does a nice job of giving the backgrounds interesting lines, showcasing all parts with audio equality, and stitching in some cool techno enhancements for a flavor boost. The next three tracks (Right as Rain, Speechless, New American Classic) could all use more creativity in the score, and New American Classic needs some editing consideration as it wanders too much and for too long before the final payoff. Unfortunately, just singing the right notes is never enough anymore; listeners really want to be transported and treated to something clever and memorable, which requires flexibility, experimentation, and lots of part tweaking — hopefully before money is spent in the studio enhancing the finished product.

With leads this capable, I’m convinced that Low Key can be much bolder with its music. The garden gnome on the album's cover probably agrees.

James Madison's co-ed group Low Key has changed a tremendous amount since its last album Keychange. Its most recent release, the EP Self-Titled, is a tightly-focused recording that sounds current and fresh. One of my issues with Keychange was that it sounded dated, and nothing grabbed me enough to make me want to listen to the album again. While nothing on Self-Titled is revolutionary, these songs all have solid arrangements, great soloists, and engaging dynamics. All of this goes towards making Self-Titled an EP that's fun to listen to over and over again.

Kudos to the group for taking on a shorter project — there's much to be said for focusing on only six songs, and it certainly pays off for Low Key. The group really does a great job executing on all six of these arrangements; the beginning of Sweet Disposition ripples in a haunting way, and the backs are as engaging to listen to as the soloist without being distracting or overpowering. Even more melodic arrangements really move nicely; the background of Speechless sounds like long sustained notes, but a closer listen reveals that there are subtle pulses and movements here that keep the song from dragging.

One thing that Low Key accomplishes here that's surprisingly difficult is that the singers all sound incredibly engaged in every song. On Right as Rain, every "bop!" in the background is sharply precise, and it just sounds as though every single singer in this group is 100% absorbed in the moment. It can be so difficult to capture that presence to tape, but that can make the difference between an album that's good and one that a listener wants to hear over and over again.

What keeps Self-Titled from the elusive "5" score here is just that nothing is ground-breaking. That shouldn't negate the absolutely solid performance that Low Key has delivered, though. This group has done a great job of presenting beautiful and precisely-executed arrangements of contemporary pop songs — and that's certainly enough to keep me coming back to Self-Titled.

To order this album, send an e-mail to jmulowkey@gmail.com.