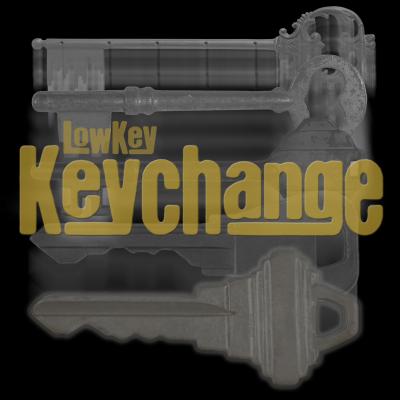 After a somewhat underwhelming opening track, Apologize and Hit 'Em Up Style give us an all-too-brief listen of what kind of group James Madison University's Low Key is on its best day.

Apologize gives us the breathier, sparser intro we're expecting, then weaves several simple, but effective, "doo doo" background lines into well-voiced pad chords. Then, right on cue, everything cuts out for a second and we're in the chorus with more wide open syllables also nicely interwoven, a solid, groove-establishing vp and a solo from Mikey Urgel that negotiates the natural voice break in the lead very well. In the transition back to the verse, we get an unexpected step back in complexity — which is quite effective — and then we move into verse two which adds layers to what came before. The song gets a bit repetitive by the 3rd chorus but it's over soon enough so we never get bored.

The "oo-ey oo-ey oo-ey" "bow-doo bow-doo" exposed opening of the next song raised my eyebrows until I checked and realized it was Hit 'Em Up Style, which then just made me chuckle. And before it can get to be too much, Lauren Smith jumps in with the requisite sass that the solo requires and off we go. It could be argued that Colin Smith falls in love a little too much with the background figure that repeats over and over in the verse and chorus, but once again, we get an unusual transition from the 1st chorus to the 2nd verse that keeps things interesting and when we get to the bridge, there's a complete tonal shift to a simple "ooh", followed by a smooth, unison interpolation of Destiny's Child's Jumpin', Jumpin', and then a couple of choruses that let Ms. Smith let loose with her best melismas that are fanciful without ever losing control.

Unfortunately, everything that is right about these two songs is wrong — to some degree or another — on pretty much every other track on Keychange. Backgrounds sound mechanical and devoid of energy far too often (Unwritten, I Wish I Could Go Back to College), arrangements are simplistic and underdeveloped (Kids, Turn Me On), soloists aren't always ideally suited to their material, and even the vp — which in places is sampled effectively — has far too many moments of sibilant weakness (Champagne High and Swallowed in the Sea are the two worst offenders). Bittersweet Symphony is perhaps the biggest headscratcher as its only purpose seems to be to demonstrate that the soloists could get out all of the words. Otherwise, I'm baffled as to why what is essentially a 4-bar arrangement repeated ad nauseum deserved to be included here.

Depending on who has graduated or not, there's clearly talent to be mined in Keychange, but right now, it's a fleeting thing — brief moments of greatness springing from more frequent mediocrity. With that said, if the group can focus on the most successful moments of Keychange and make those the rule rather than the exception, I'll still be interested to hear what Low Key gives us next.

When albums are heavily produced, but have a popped vocal layer where the singers clearly sound skilled and confident, we call it "slick". When albums, such as Keychange, are heavily produced but the vocal layer is a little weak, a little lackluster, the end result sounds more like a cover-up than an enhancement. Overall, Keychange isn't the strongest collegiate album that you've heard lately, but a few crazy-good soloists and some nice mixing work will keep it afloat for awhile.

The most troubling aspect of this album is the listless vibe heard in many tracks. Unwritten is a prime contender, where the background sounds positively uninterested in singing. Even the clapping somehow sounds lifeless, like a few folks doing pity claps at a co-worker's sort of funny joke. This vibe doesn't do enough to support the awesome soloist from Katie Grabsch on Turn Me On, and makes normally beautifully-painful Champagne High carry on much too long. Energy and give and genuine excitement just isn't possible to create at the board. Low Key needs to work much harder on owning individual parts while maintaining blend so that the soloists don't sound so separate from the quiet, docile block underneath.

A lot of this will come down to infusing style, which bubbles up periodically on Keychange. There's something so captivating about the way the group sings the simple word "oops" on Hit 'Em Up Style, and something so awkward about its stylistic choice to sing in unison to bookend Such Great Heights. Using bits of flair is a powerful arena when done well, and really sticks out when done poorly. No one exhibits great flair here as well as lead Lauren Smith on Hit 'Em Up Style. This girl gets it, and this girl delivers.

More energetic volume and boot-stompin' "I-got-this" confidence will take Low Key a long way toward producing a stellar album. The notes are right, but the group isn't sizzling yet.

One of the unfortunate issues with Keychange is how dated it sounds. The album was recorded from 2007 to 2010, so it's hard to fault the group for picking a song like Apologize, which is overplayed now but was new at the time. Still, the group could have done some editing here: not every song recorded needs to make it onto the final album, and many songs here are overdone or just past their prime. Unwritten, Such Great Heights, Swallowed in the Sea, and Hit 'Em Up Style could have been released on an album five-plus years ago, and the group does little to update or modernize these songs. A group can certainly sing whatever repertoire it chooses, but overdone and dated songs definitely have an impact on an album's repeat listenability. Another repertoire issue: the Avenue Q song I Wish I Could Go Back to College sounds completely unconvincing from kids who are actually in college, and Broadway tunes always stick out on an album full of pop/rock numbers.

One of the group's strong points is its soloists: Lauren Smith on Hit 'Em Up Style, Katie Grabsch on Turn Me On, and John Farris on Champagne High all deliver excellent solos in very different styles. Turn Me On is especially a highlight of the album; the arrangement has a lovely lilting movement that keeps this slower song still moving forward. Here and on other Keychange songs, Low Key does have some nice dynamics — a little bit more would have been nice, but it's a good start.

And speaking of the group's arrangements, many of these songs actually feel short to me. I was surprised at how quickly the songs seemed to end, but most of these recordings are in the very standard three-four minute length. That's generally indicative of the fact that these arrangements have good movement and don't drag or feel too repetitive.

And that brings me back to my initial assessment: these songs are certainly easy to listen to once. The arrangements move, the soloists are solid, and the group sounds like it enjoys singing these songs. But none of these songs or interpretations grabbed this listener enough to make me want to keep listening over and over again.

To order this album, e-mail jmulowkey@gmail.com.