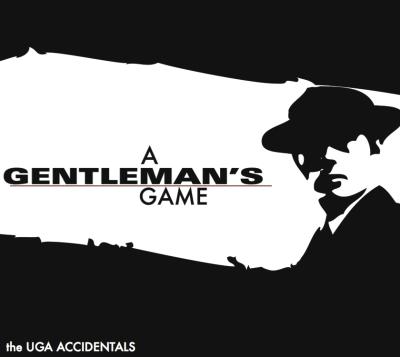 The UGA Accidentals deliver some of the most testosterone-fueled live performances you'll ever see. At their best, their sound is resonant, soulful and manly. Like a favorite pair of leather boots: strong, scuffed and decidedly badass.

That's the Accidentals at their best. Unfortunately, not every track captures the group at its best. Comin' Home Baby displays a great lead but the percussion cycles through several choices that just sound out of place, as if a Casio keyboard had been accidentally set to a different preset like "latin" or "hip hop". Bad Things displays a lead with just the right vocal quality, but the editor should have corrected a few more tuning and rhythm issues.

Crawl is ready for radio. Come Together rocks hard. A Change Is Gonna Come will move you. And where track scores lie in the "good" range, know that they're usually fast closing in on "excellent". Only a few awkward production/editing choices and the occasional off-arrangement hold this group back.

But while some elements drive the scores down, overall, there's something truly special here. These guys bring talents that are likely to convert many fans. I recommend A Gentleman's Game for the gems and I anxiously await the Accidentals' next release.

What to make of A Gentleman's Game from the UGA Accidentals? This is an album that has a lot of people trying to do a lot of different things well, and only truly succeeds at any of them intermittently.

First, we have the material: a little bit country (Jason Aldean) and a little bit rock & roll (The Beatles); a little bit hip hop (Chris Brown) and a little bit soul/gospel (Sam Cooke, Blind Boys of Alabama); some lesser known (Jeremy Kay, Jace Everett), and some wildly overdone (Kings of Leon). It's a repertoire that's truly all over the map and as is so often the case proves to be beyond the Accidentals to handle such a diverse range of music. Challenging yourself is admirable, but recognizing limits is also valuable.

Next, we have a multitude of arrangers and arrangement editors: Stephen Hutchings (I assume the group's MD, though the liner notes offer no such information) handles the lion's share, though he (and a few others) is edited in several instances by Robert Dietz, who also contributes an arrangement of his own, as does Christopher Diaz, Dean Byrd, Robert Hart, Kiley Dorton & Kirby Duncan (in collaboration), and Jonathan Sparks (in collaboration with Hutchings). I'd say this was an embarrassment of riches if the work was more consistent, but here again the results are all over the map. As a finished studio production, Crawl is definitely the best overall track on this album and worthy of its Runner-Up 2012 CARA for Best Male Collegiate Song. To me, though, it feels more assembled than performed and left me a bit cold. Ditto for Comin' Home Baby's endless percussion variations that came off as a great deal of sound and fury signifying nothing. I much preferred the inventiveness of Come Together, the energy of She's Country, and the straight-ahead soul and passion of I Shall Not Walk Alone. Oh yeah, and then there's Don't You Worry 'Bout a Thing, courtesy of Random Notes' Tom Anderson, which rightfully leads off the album as a sort of master class/tutorial in arranging without awkward, exposed syllable choices, hyper-active vp or overdone production — almost mocking by comparison everything that comes afterwards (the "4" above has nothing to do with the arrangement — more to do with lack of dynamics, and production choices).

On the solo front, we get nine different soloists over the twelve songs featured here and while that's certainly egalitarian, very few of them distinguish themselves as anything more than serviceable. Exceptions would be Marcus Hines, for whom the opening track sits a bit low, so it's wonderful to hear him have the chance to wail on the closer (for which he was a CARA nominee this year). Also, Stephen Hutchings also does well by Bad Things and in so doing, may finally add a much-needed new entry to the very limited bass solo canon.

Lastly, there's the production team and while there's a lot that sounds excellent here, there are also a handful of exposed sloppy tuning moments — especially in faster-moving parts in the higher voices — that either went unnoticed by Shane Fuhrman or which lack of time prevented from being corrected. Similarly, for mixes by Ed Boyer and James Cannon, there are a surprising number of instances (opening two tracks, One Day) where the backs almost completely swallow the solo, especially in the verses when the soloist is straining a bit on the low end.

With so many cooks on so many fronts, the inconsistencies are not particularly surprising. For now, I'd grab Don't You Worry 'Bout a Thing and Crawl (and perhaps Come Together and/or She's Country), and hope that with the group's next effort the Accidentals focus in and try do more with less rather than more with more.

The University of Georgia Accidentals sound very pleasant on the group's latest album A Gentleman's Game. That's definitely damning with faint praise: sure, this group is in tune and has good soloists, but there's nothing on the album that reaches out and grabs me, and so it fades into the background.

Even the songs that have some great moments end up settling for being boring. Comin' Home Baby has one of the strongest starts on the album: the backs start things with a great tone, and the sultry solo (Taylor Greer) really fits with the song. Then, there's a command to "speed it up a bit", and that's where the song falls apart — sure, the tempo change helps keep the song from being too repetitive, but the guys just can't keep up, and the faster section just sounds really messy. Similarly, Have It All has a really nicely swaying upbeat tempo and is one of the most solid songs overall, but it just never goes anywhere. The final big harmony chorus needs to be big, and these guys never take it there. On Come Together, it's cool that the soloist mixed up the melody a little bit, but the arrangement leaves a lot to be desired and the tempo change is really jarring. Crawl has a great mood-setting opening which hints that the guys are going to swell into something amazing, but then the guys start a hand-clapped rhythm, which becomes the only thing I can hear in the song.

And those are the songs with great moments.

The rest are just bland, and a lot could be saved with just a few simple dynamics. Several of these songs offer a deep political or spiritual message — A Change Is Gonna Come and I Shall Not Walk Alone in particular — and the guys just don't ever sound moved or passionate enough. So much could be done with these songs and arrangements with just a few dramatic builds! Similarly, She's Country sounds pleasant enough but just never goes anywhere. Little jokey comments like "And now, the spicy Latin breakdown!" in Don't You Worry 'Bout A Thing (whether that came from the original song or not) just aren't enough to give songs the momentum they need.

Ultimately, A Gentleman's Game is pleasant enough, if you like your a cappella to be background music. If you're looking for something that'll reach out and grab you — something that you'll remember hours and weeks after you hear it — then you'll have to look elsewhere.

For physical CDs, email requests to uga.accidentals@gmail.com. This album is also available on iTunes.