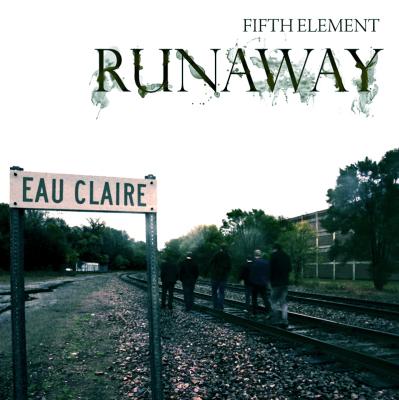 If I Ever Fall In Love is a perfect example of Fifth Element's rock stylings — even in the context of the group's pop/R&B material. Compare the throaty, bluesy tone colors Fifth Element brings to the original's hyper nasality. The arrangement is pretty much a lift, but the Fifth Element sound is distinctly edgier. The same can be said for Grace Kelly. These leads just rock more and that catches our ear.

Let's Get It On — my favorite track — is strikingly similar to the Pentatonix version, and that's high praise. In the case of both groups, truly spectacular lead work turns this ridiculously dated booty call of a song into something genuinely fun.

While Superhero is well sung, the album's first real head-turner is guest artist Gillian Pacetti, who impresses with her stylized power belt on Empire State of Mind. Guest artists can widen the palette, but they do bring risk. Here, the rapping, believable and enjoyable though it is, ends up as the supporting act. Pacetti is too good to pass up, but programming the song later on the CD would have allowed this track to act as a refreshing change from an established sound. Track two is just too early for this cleansing sorbet.

Sixteen Tons — my least favorite track — displays solid voices, but dubious choices. The lead makes significant and distracting switches in tone color that don't further the song's meaning or musicality. It's a shame because it's easy to tell that this is a bass voice worth listening to.

All that said, Fifth Element's pervasive energy and often terrific leads trump other considerations on Runaway. The group's fans will be very happy with this purchase.

What a difference some re-tooling and refocusing can make. Good gosh, is this album leaps and bounds above Fifth Element's last foray in the studio. The group has returned to putting out higher quality music. Runaway continues Fifth Element's tradition of offering up engaging pop music suffused with occasional Rhythm and Blues styling and a bit of quirky fun. This sextet is ever-present in its sound, creating sonically pleasing tracks that you'll either really like, or perchance love.

Dare I say that the guys have even learned how to create sexy music? Let's Get It On and If I Ever Fall In Love are just flat-out puddle makers (regardless of their status as dinosaur songs for a collegiate group to record without a hint of irony). Let's Get It On highlights Nels Urtel's flawless delivery skills. He has the ability to undo your core, which is a great ability to have. And just to prove that he isn't the only talented one in the group with the superpower to charm someone's pants off, the group shares solo responsibility on Shai's hit If I Ever Fall in Love. This seamless achievement is almost on par with Committed's tour-de-force performance of Let's Stay Together on The Sing-Off.

While I'm talking about solo ability, someone needs to write a new bass solo song. Alex Collie-Hartmann performs Sixteen Tons pretty well here, but the song completely detracts from the overall cohesiveness of the album. This song goes beyond even the group's normal level of Midwestern kitsch (Ridin' Solo and Grace Kelly) into a realm all of its own.

Yes, some of the songs are a bit on the cornier side, even when they weren't meant to come across that way. I wanted to love Hometown Glory, and parts of it are exquisite. Unfortunately, the emotional edge needed to covey the story effectively is lost in this particular instance. Other songs feature highly creative arrangements and a robust sound like the opener Superhero, the evocative Empire State of Mind, and the original Runaway. More songs like these would make this album a must-have for everyone.

Runaway has a couple of moments in the spotlight, which should suffice for the casual a cappella fan looking to experience a group not currently on their radar.

Most a cappella fans hope — and really expect — that after all the girls stop screaming and fainting, all-male collegiate groups will kick-it for them full throttle. The six men of Fifth Element do just this, while managing to be wickedly smooth and audibly charismatic, too. Runaway is a beautifully produced, highly satisfying album that stands tall in the collegiate realm.

What's the best thing Runaway has going for it? Confident leads full of star power that aren't afraid to tear it up at the mic, many of whom could be dropped into a professional group without issue. I'm particularly taken with Tim Mattson's high-octane show on Superhero, and Nels Urtel's sexy-gravelly spin on Let's Get It On. On the opposite end of these tenors sits one raw and lively bass, Alex Collie-Hartmann, who is showcased frequently in the mix to everyone's great delight. When the current trend is to compress the bass line into one constant boom, it's just fabulous to hear subterranean human notes poking out to round out the bottom and add character. Alex gets his turn at center stage on Sixteen Tons, the fun classic he handles mightily.

The audio mixing here is thoughtful and crisp, courtesy of Bill Hare. Tracks bounce back and forth between the very hyper-produced (like Jay-Z's Empire State of Mind; Fifth Element's version could easily spin at an exclusive dance club), to the old-school finger-snapping sounds of If I Ever Fall in Love, which has plenty of open space for chords to lock and all the soloists to freely run around. But it all still sounds like a consistent listen, surely in part because the arrangements are solid, too. The final product of Runaway is awesome, and turns six guys into their own well-equipped a cappella army.

Oddly, the weak part of the album for me is Fifth Element's original, Runaway. RARB loves the effort of originals in our cover song land, but a few things don't line up well here. There are interesting chord progressions, but the syllables are clunky and the song kind of muddies up with the over-clustering style. Plus, the mid-song tempo change comes across awkwardly. Is this all part of the songwriting process? I reckon so. And again, I'll always hope for more originals.

As a whole, Runaway is a stellar release, and UW-Eau Claire students sure are lucky to have these guys around to serenade and rock for them. You can't go wrong picking up this one.