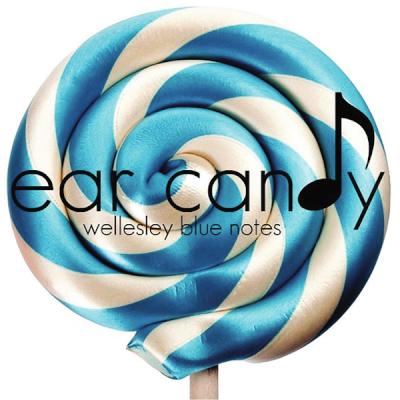 I hear confident steps forward on Ear Candy since the Blue Notes' last release Rebirth. The jazzy pop-ster Blue Notes have a little hotter fire now, and the soloists sound more secure and satisfying (with doses of individual flair too, like Christie Lee's take on Parachute and Chelsea Skone on New York). The arrangements are elevated as well, sounding more consistent, and starting to fit among the Blue Notes' peers in the all-female collegiate a cappella realm. This is all wonderful news, but I'm still bothered by the nearly industrial machines at work here.

The level of production on display for Ear Candy doesn't sit well with me. You'll hear the eerily blended electronic voices open Feeling Good, and they just stick around. Constant robo-bass is hard to accept also, because instead of being supportive (the primary job of a bass section), it just sounds like its own separate non-blending entity kicking around down there, and for me, that's distracting. Also, if the vp is going to be this digital why have someone from the group bother performing it all in the first place? The treatment wrapped around Ear Candy sounds sterile and artificial. And since so much has been worked and overworked here, we can occasionally hear little cuts through headphones (like 3:08 on Everywhere).

Since this isn't the first time the Blue Notes have favored such heavy production, it's obviously to the group's liking and preference — and hey, it's the Blue Notes' album after all — but finding a sweet spot between human and machine would actually give the group's work more heft than all this synthetic creation. Any group can engineer past the tipping point, and sometimes it sounds really cool (especially for dance/hip hop tracks), but those that marry natural and artificial perfectly to add something special while maintaining the group's core sound? Those are the albums that get played over and over again. Those are the albums that leave space for heart and emotion. That's really ear candy.

I'm also bummed that the Blue Notes have incomplete liner notes (and by "liner notes", I mean a bit of information on the back). Simply listing the original artist and not the composer/songwriter isn't enough when you have a product for sale. And this part is optional, but listeners do appreciate knowing more about the singers they're listening to: at least listing all of the group members is appropriate.

The Blue Notes are making improvements, but there's more work at hand.

If I had to choose one thing that characterizes all-female a cappella, especially the top groups, I'd choose this: interesting arrangements. Ear Candy is no exception to my thinking here, as the Blue Notes try out some pretty neat stuff. The album isn't perfect, but by Jove, at least it's interesting!

I'm not going to spend a lot of time bemoaning the lack of low end here, because the Blue Notes have put a lot of effort into making sure their arrangements cover the range of the female voice without resorting to stratospheric soprano trickery. In fact, bass and vp sound great, strong and focused, and always adding to the strong arrangements.

I've praised the innovation and skill seen in the arrangements (congratulations to the group's skilled writers, who've really done a bang-up job here), so how's the rest of the album? Pretty good, actually. Song choice is a nice mix of well-known material and more obscure song choices. Soloists are for the most part solid; I particularly enjoyed Christie Lee on Parachute, Camila Arze on Brown Eyes, and SJ Gray on Feeling Good. The overall feel and intensity of the album is similarly well executed, with the Blue Notes exploring a full dynamic range.

The production is a bit more of a mixed bag. I praised the bass and vp earlier, and soloists pop out of the mix nicely, but overall the album feels processed in an unbecoming way. Background vocals and pads are clean, and effects are (for the most part) applied tastefully, but the whole aesthetic is too bright and aggressive, and it doesn't match up with the soloists' performances. The Blue Notes' group sound emerges from time to time, but too often the disparity between soloists and background soundscapes overwhelms.

It's not the wheel reinvented in pure energy form or anything, but fans of collegiate a cappella will probably delight in Ear Candy, a solid and focused release.

In many ways, 2011 was a breakthrough year for a cappella, perhaps most notably for female groups. Delilah, The Boxettes, and the fledgling Musae showed the a cappella community that the ladies can rock even harder than the boys.

With Ear Candy, the Blue Notes make an effort to join this revolution with a number of driving songs featuring powerful percussion. While they don't quite achieve this goal, they do have the kind of album that you'll enjoy listening to, though you may not necessarily press "repeat" too often. There are a few standout tracks and moments, but there's not enough consistency to consider this a top album.

A few things are clear on Ear Candy. First, Carl Taylor from Liquid 5th Productions, who mixed the album, raised the level of the overall product with his crisp, snappy production on the percussion and his thoughtful touch with EQ and effects, notably on songs like New York and At Last. Second, the Blue Notes have a number of very talented singers; unfortunately, not all of them know exactly how to deliver on their specific solos. The notable exceptions are Chelsea Skone, with her bitter delivery on New York and playful and intimate solo on At Last, Camilla Arze with her exquisite control on an otherwise plodding Brown Eyes, and Isabella Gambill's dark take on Ain't No Sunshine.

The tracklist does not appear to follow a particular theme or style, instead offering a potpourri of old school R&B, rock, and both mainstream and indie pop. The title shows the group won't apologize for offering songs you may have heard covered before. Instead, the group offers its own take on each, and while none of these renditions completely fails, few really innovate or reach inside your brain and point your hand to the repeat button.

Those which get close are invariably flawed. For example, Ain't No Sunshine is nuanced and textured, with a mysterious and morose first verse that progresses into an angry and resentful second verse that gets undermined by disconnected reggae-styled "jeng-a" syllables towards the end. Other songs feature moments of thoughtful and effective arranging, such as the cascading voices towards the end of Animal and the powerful choruses of Battlefield, both of which emphasize some of the most energetic moments of group singing. Unfortunately, they are just moments, and neither song maintains that level of interest from start to finish. Other times, like throughout the backing parts on Brown Eyes, the group simply sounds bored.

Ear Candy is an album like many others in the collegiate catalog: a collection of songs the group enjoys singing, some strong solos, and considered but inconsistent arranging. The studio production brings a number of lackluster moments to life, and sometimes explodes them out of the speakers. If the Blue Notes can raise their level of consistency to the highest points they reach on Ear Candy and engage in more innovation with such well-trod fare, they might just join some of the groups we started to see in 2011.

Please visit facebook.com/wcbluenotes or email sarahpowellmiller@gmail.com to order physical copies of this album.