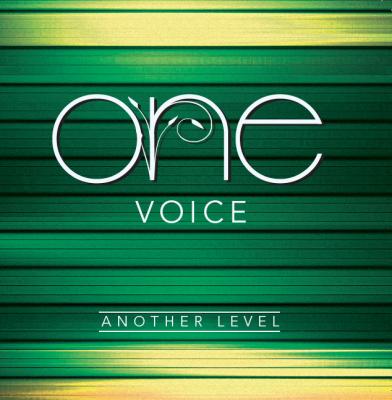 OneVoice's aptly titled Another Level is a high school release in name only. The arrangements — mostly penned by (adult) director, J.D. Frizzell are haunting and powerful, full of the beautiful and unexpected and free from purposeless distraction. The voices are unbelievably soaring, textured and impossibly wise beyond their years. The production is first rate. The song selection is cohesive, varied and compelling. Even the liner notes provide the right credits. This is how you do excellent.

If all that wasn't enough, they tap aca-luminaries Robert Dietz (a RARB volunteer) and Nick Girard for one arrangement each, just to open and close the album, which they handle with infectious energy and pure emotional intensity, respectively.

Chris Brown's Forever is uber-processed and ready for the clubs, with a non-stop beat and heart-stopping lead by wunderkind, Spencer Stewart. And though Jar of Hearts brings the tempo down to ballad speed, the soloists, Ellen Uhlman and Bailey Hyneman, don't let the intensity down for a second, both singing with beautiful, fascinating voices and the palpable craving the song insists upon.

Take on Me demands a two-octave-and-a-fifth range from the aforementioned Stewart, and though the low A is a breathy stretch for this tenor, his middle range, money notes and falsetto are exactly what the A-ha cover demands.

Someone Like You also scrapes the bottom and top of lead Lauren Mohler's range, but her performance is overflowing with emotion, and her voice has the kind of hypnotic texture that whispers of life experience far beyond the typical high schooler's. The tension-filled ethereal back-ups are angelic.

The '90s classic Wonderwall is a bit less dramatic with fewer vocal demands, and Stewart, despite handling the song with ease, seems to be chomping at the bit, ready to explode past the song.

Indie hit Who Knows, Who Cares shows off more of Stewart's personality, while co-lead Shelby Mann tastefully supports Stewart without ever stealing focus.

I Was Here has the most soloists of any of the tracks, but though their voices shine, the arrangement and its dynamic phrasing may be the track's true star.

Another Level finishes with an inspirational version of Freebird that grows from intimate and plaintive to something intricate and unbound. When lead Austin Sherrod hits his heartbreaking high note, it's a moment of pure, climactic transcendence and a perfect end to the album.

One of the best High School releases of all time. Pure and simple, Another Level belongs in your collection.

Have you heard of OneVoice from Briarcrest High School in Memphis? Have you heard of the group's composer-director, J.D. Frizzell? If not, thanks for letting me introduce you to them and the best high school album I've heard at RARB, Another Level. This album has changed my perceptions and expectations for the genre. If you pop Another Level into a player for a cappella friends, I bet eight out of ten listeners would guess OneVoice is collegiate a cappella, and the remaining two would guess pro. (If I'm way off, after-school pizza is on me.)

The OneVoice musicians are masters at conveying mood, a big musical aspect that separates them from many a cappella peers. Forever contains as much authentic fun as you can pack into an opener, hooking the listener immediately. The controlled giddiness of Take on Me reminds me of an awesome Fraggle Rock performance, though maybe the OneVoice-ers haven't heard of that '80s show. The heartache is all there, all the time on Someone Like You, a stunning arrangement by Frizzell that's forward movement and intricate embellishments are totally perfect, with such a raw and captivating solo by Lauren Mohler. Also capturing mood? The vocal percussion, which is steady, varied, and polished on Another Level without losing all of its human touch (or spit, as it were). Add to this well-developed leads who are confident and talented, plus challenging and fresh arrangements underneath, and the whole package is there, just for you.

The last two tracks are a total tour de force that couldn't be forgotten if you tried. I Was Here gives off the same vibe as some of the awesome Nordic a cappella groups we all love, where precision and atmosphere are paramount (plus there are no lyrics until 1:15 — just sweet, sweet music). And then there's the gigantic closer. You'll have goosebumps for the entirety of Freebird, both from Nick Girard's haunting reinterpretation of the '70s classic, and from Austin Sherrod's sensitive yet powerful delivery on lead (and he got a football scholarship — way to go, Renaissance Man!).

My only quibbles lay with a few fussy details in the production and aesthetic choices. The soloist should have been turned up for a few of the verses of Jar of Hearts, especially the opening. That super-low note at 2:56 on Take On Me sounds like the lead is blowing on a Coke bottle and probably should have been sung by a bass for that moment. (But I get that it's fun to try.) The treatment on Wonderwall is a little cloudy sounding and always sounds too different from the rest when it rolls around on Another Level. But one fussy detail that came out just right: crediting the songwriters instead of using "As Performed By" on the liner notes. Anyway, all of this is to say that it's not absolute perfection, but the end result is excellent.

Oh, to live in Memphis to see OneVoice perform live! Another Level is a wonderful recording achievement, and I'm so very pleased to own a copy.

Listening to OneVoice's Another Level puts me in a bit of a bind. Per the RARB guidelines, I need to judge the album based on the entire body of recorded a cappella available. I can't judge it solely against other high school albums, grade on a curve, or preface every sentence with the phrase "For a high school group...". And it's too bad, cause really, for a high school group this album is pretty good. But in terms of collegiate, semi-pro, and professional groups? It's average throughout, and even has a few moments that would give a sophisticated listener pause.

These kids clearly have the basics down. They sing well with acceptable levels of energy, emotion, and sass. The track list is a standard mix of current radio hits and slighter older fare. Arrangements are mostly solid but not particularly innovative; two exceptions are the danceable grooves of Forever and the tender reinterpretation of Freebird.

But while there are good things happening on the album, such as Spencer Stewart's solo on Take on Me and the powerful alto section throughout every song, there are some missteps as well. To be fair, some of these flaws can be attributed to the singers' ages, such as a thin soprano sound and a bass section that lacks richness and fullness.

The overarching issue with the album is a lack of cohesion and vision, making almost every track sound slightly off. For example, while Stewart sounds great on Take on Me, the lower sections of Forever are clearly a struggle for him. And why, on Adele's emotionally exposed Someone Like You, would you have the entire group join (and overpower!) the soloist for a few lines during the chorus? Also, Jar of Hearts features a distracting solo switch in the middle of the song — if no one in the group can sing the entire range of the solo, it should be arranged in a different key.

I don't want to come down too harshly on this album. It's not outstanding, but it's not painful to listen to. The fact that my criticisms are mainly about artistic choices actually says a lot about the quality of the album — it means that the members of OneVoice are talented enough to be playing on the same field as collegiate groups. It means that the problems with the album aren't the vocal skills or enthusiasm of the singers. Mostly though, it means I've got my fingers crossed that each and every member of OneVoice decides to pursue a cappella in college. I think these kids have great potential, even if Another Level doesn't quite showcase that.

To order a physical copy of the CD, please contact J.D. Frizzell at jdfrizzell@briarcrest.com.