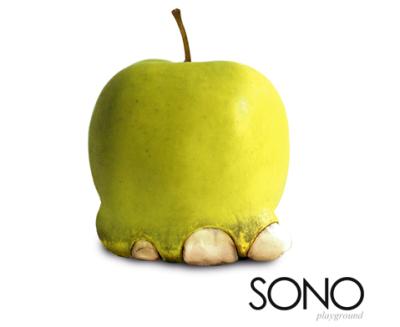 SONO's Playground sounds a lot like its packaging looks: cheerful, chic, inviting, surprising and periodically puzzling or just a little bit off. In general, I like it a lot and it reminds me why Denmark has been the place to be this year, with an innovative aesthetic that is both accessible and remote.

Også Om Dagen is a brilliant choice to open the album. It's the best song on the disk, always a smart lead-off move. More than that, it establishes this group immediately as confidently Danish, a huge asset when you're selling mostly English language music to a possibly English-speaking audience. No matter how many Top 40 tunes they cover, European singers aren't American and they need to make that a strength, not a curiosity or an accent mimicking contest. For SONO, opening in Danish made me focus on the quality of the voices and the strength of the performance. Plus, Julie Maria's song is a pretty catchy number. Glor På Vinduer, the other Danish tune on this disk, is a mesmerizing performance but not as charismatic.

One surprising thing about SONO: this isn't an a cappella band so much as a pop choir. There are 21 of them! They have a conductor! I totally did not get that from the sound on my first listen — the singing has the same taut focus of a six or eight-person group and I attribute the often lush blend to multi-tracking and other studio polish. Turns out the production is indeed excellently done, but notable in the way it makes so many singers come together so cohesively. This record doesn't sound collegiate to me, with a huddle of singers supporting one or two standout soloists. It sounds more like a pro band where everyone has their own microphone and where sound level decisions affect the blend as much as individual tone. It occurs to me that a few collegiate groups have tried a similar approach with similar results, so I guess the lines between big college band and small pro ensemble are blurring more these days.

The performances in English are more uneven. Gotta Get Thru This is fun through and through, while Silverflame and Raindrops have more measured success. I loved the energy on Silverflame the first time through, but the intonation doesn't hold up to multiple listens. As for Raindrops, I don't care for the chorus but I really got to like the background syncopation and all the patterns in the lower-voice underlay. All of the arrangements head toward a shiny sound led by a thin-toned bright soloist, whether male or female. The sound has a pale palette, like the northern European sky that goes from grey to lightest blue or, when the sun breaks through, a gorgeous light yellow shot with gold.

And then there are the puzzles. Why does the vaguely elephant-shaped apple on the front cover have teeth where the feet should be? Why is there a kiwifruit with a large elephant ear? Why is there a Christmas carol reimagined as a soulful Nordic club tune? I might like this version of God Rest Ye Merry Gentlemen if I were a contemporary Christian radio programmer looking for anything to spice up my airwaves. Or, I guess, if I didn't speak any English at all and wanted to bop along. Being neither, I tried to admire the performance while completely not connecting with the creative decisions that willed it into existence. Also, I'm not sure I buy I Can't Make You Love Me as a duet between an American Idol-level bland guy on the verses and a bevy of wistful women singing together through the chorus. There are too many other versions of this song with too much more going on to spend much time figuring out this one.

Playground is a good space to hang out, and there's a lot here to recommend. Like the singing bird/citrus on the inside cover, sometimes it's best to enjoy, not think too much, and bask in the overall good vibe.

SONO describes itself as a "rytmisk a cappella ensemble" from Århus, Denmark. Anyone familiar with the European vocal scene will immediately recognize that this city is home to both Vocal Line and Postyr Project. Educator and Vocal Line director extraordinaire, Jens Johanson has created a veritable garden for the rhythmic a cappella sound, and newcomer ensemble SONO appears to be setting strong roots in this fertile soil.

Despite its roster of 21 members, SONO sounds like a small group. In American contemporary a cappella, having 21 people would probably lead to a hot mess. Yes, the wall of sound can be bombastic and awe-inspiring, but the desire to give all 21 people something fun to do at all times, lest they begin texting in the middle of their own concert, presents a real danger of noisy, ineffective arranging.

By contrast, SONO approaches its music, pop, though it may be, from a place of comparative simplicity. Moreover, these Danes display a musical patience that many Americans appear to have foresworn after a decade of American Idol-sized snippets passed off as whole songs. SONO waits for the flower to bloom.

SONO boasts exciting leads of both genders, ranging from driving, Bjork-like Også Om Dagen, to the R&B-pop Gotta Get Thru This, to the gentle jazz that influences many of the tracks.

Listeners will enjoy the vocal percussion, which, at least in the first half of the album, sounds like an actual talented beatboxer rather than fastidious DAW programming. To nitpick, there are a few tracks where the snares could have had a little more crack to drive the sound, and a few tracks could have had a slightly later "pocket" rhythmically, but overall the vp provides a full and well-placed performance that enhances the entire album. The real star might be SONO's blend, phrasing and dynamics. Singing this artful brings the tasteful, jazz-influenced arrangements to life.

Production work is fine, although the simplistic mix choices seem to favor an enhanced natural quality over anything particularly creative in its own right. Still, the mix leaves the voices and arrangements sounding nearly as they would in a well-engineered, miked concert. The group's live fans are sure to be pleased with Playground.

SONO's album artwork is some of the most professional ever beheld in the world of a cappella. Fruits and animals are creatively and evocatively merged to beautiful effect. Ironically, the artwork's unexpected combinations lead one to imagine a sonic equivalent that is both groundbreaking and genre-defying. For all its strengths, Playground defies no genres. The singers blend, they phrase and they solo — all dynamically, all with grace. If that sound appeals, SONO is for you.

SONO is a hot Denmark group (as indicated by all the breathy panting on Playground). It's also a huge group, with some twenty+ members wailing on microphones, and yet, the sound never gets out of hand — the music here is simply full and vibrant.

Even with all these singers, the real talking point for Playground is the vocal percussion, which is ever-creative and ever popped in the mix like a big exclamation point. So often percussion on a cappella albums is so processed and copied and pasted that it truly becomes the background, is truly just there to keep the beat mechanically for the vocals. But on Playground, the vp creates a unique sonic layer that is infused with fun personality, allows for complex time signature and rhythmic manipulation, and makes the listener in awe of all the cool licks and tricks in each passage. The percussion here is just as important as the soloists, and that's a real treat. Hear the very best on Også Om Dagen, Gotta Get Thru This, and Raindrops (the last of which is "drummin' like a drip-drip-droppin' drum machine").

Speaking of the soloists, all of the leads on Playground sound comfortable and confident, but the women make a bigger splash. I'm particularly fond of Mette B. Schriver's captivating work on Break of Day.

Yet only two tracks here completely kick ass: the sexy opener Også Om Dagen (which reminds me of the stylings of Swedish group Riltons vänner), and the seduction piece Glor På Vinduer. Both have a hip club vibe and worlds of flair and attention to detail. But there's an issue with Playground that plagues many a cappella groups: a lack of cohesion for the album as a whole. I'm just not sure how something as hot as Glor På Vinduer could be followed by the Christmas tune God Rest Ye Merry Gentlemen, which was pegged to close the album; the arrangement is great, but the overall choice is pretty darn odd. Likewise, Lovestoned and Gotta Get Thru This both sound good, but the tracks merge together into one long mega dance song, taking up lots of valuable space on an album that could have been filled with more unique tracks. Likewise, Say is alright as well, but the heavy staccato reinterpretation seems so forced compared to the original's emotional push and pull, and could have been replaced with something more compelling. It's good music, but it's not a particularly focused album.

I'm sure creative suggestions were really flying with so many members to give input for Playground. Overall, it's a strong and interesting offering, but I look forward to a more refined release.

This album is available through iTunes and the group's web site.