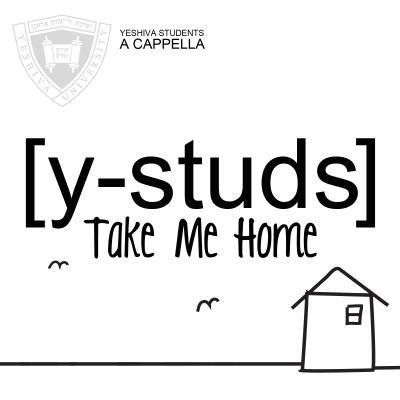 I have a soft spot for Jewish a cappella groups because I used to sing in one. And I've been delighted to watch as groups like Tizmoret from Queens College, Shir Appeal from Tufts, Kaskeset from Binghamton and others have helped usher collegiate Jewish a cappella from its predominantly kitschy and somewhat cheesy roots into an era of greater sophistication and quality.

Yeshiva University was a bit late to the a cappella party until the emergence a few years ago of The Maccabeats and the group's Chanukah parody of Taio Cruz's Dynamite. Now YU gives us The Y-Studs and the group's debut album Take Me Home, which the Jewish music market — for the most part, unfamiliar with the present level of contemporary a cappella music-making — is likely to find pleasing, but which isn't likely to wow anyone else.

Take Me Home is an odd assortment, offering a little bit of a lot of styles: a few Israeli-style tunes (Ahavat Yisrael, Milim Yafot Me'eleh), some well-known secular pop songs (Lost, Incomplete), some traditional/liturgical selections (Bilvavi, Mi Von), a parody of sorts (Lu Yehi), a Jewish-themed English song (Misplaced), and even a show tune (Be Prepared — incorrectly credited to Hans Zimmer, when it should list music by Elton John and lyrics by Tim Rice).

What's nearly uniform throughout ALL of this material, however (and unfortunately), is a very rudimentary approach to arranging that relies on endless homophony and/or big block chords that offer nothing by way of texture, depth, or complexity to each arrangement. There is also a marked lack of dynamics, with almost everything starting at a solid mezzo forte and only getting louder from there. And whether it was in the performance, the recording, the editing/tuning or the post-production, background voices generally have a robotic, mechanized quality that quickly becomes a repetitive drone. Whatever groove or "feel" there is on a given song is generally reliant on a sampled and looped vocal percussion track. In short, all sounds on the album may have been "made by human mouth" (as noted in the liner notes), but it's the utter lack of humanity in the backgrounds that is so disappointing.

The one exception is Bilvavi — a thorough reimagining of a classic, slow, emotional ballad that dates back to 1983. For the RARB audience, a debate over the appropriateness of the treatment of the song is probably not relevant. Suffice it to say that I was a little conflicted, and some might find The Y-Studs' choices on this song a bit jarring. But what is undeniable is that their choices also show something that is in painfully short supply throughout the rest of the album: imagination and energy. There is laudable creativity at work here in the rhythmic choices and variations, the chord choices and harmonies employed, and the palpable passion with which the soloist builds the song and develops his riffs. Good stuff — if only the rest of Take Me Home lived up to this standard.

A couple of smaller quibbles: I've said it before and I'll say it again — if you're presenting material in a foreign language, provide a translation of the lyrics (and not just the song titles, as The Y-Studs do). Also, kudos for crediting the actual composers of the songs but because you do so, "Music by" is really an incorrect label, which should probably be "As Performed by" instead.

Even with all of the above, this is fairly polished debut album for any group. It's not going to blow anyone away in the greater a cappella universe and there are several areas where the group needs to improve to consider themselves meaningful competition for even just the best collegiate Jewish groups on the scene today. But in Washington Heights and on Jewish music stations like 91.1FM WFMU in the New York metropolitan area, I'm sure this is already popular stuff. And maybe that's all that matters.

The nine voices of the Y-Studs from Yeshiva University are unique yet harmonically binding. Following the lead of other collegiate Jewish a cappella groups, the Y-Studs have released an album consisting of both Hebrew and English numbers, largely on a pop-rock slant.

There are so many beautiful, heavy, thought-provoking works on Take Me Home. It's really close to a themed album, one where the singers state they are "connecting" with their "Jewish homeland". They go on to say their search for home is "often elusive". Their printed and sung messages are all so timely, so meaningful, yet the Y-Studs can't avoid the common collegiate trap of throwing some Disney into the line-up. At least it's the foreboding Be Prepared from The Lion King and not Hakuna Matata, but I can't think of much odder to put into this otherwise spiritual, soul-searching release. It certainly takes one out of the mood created, to say the least, especially since I'm now trying to draw parallels between The Lion King and Israel (?) when I'd rather just get back to the real show here. Perhaps the group was worried about having eight tracks instead of nine and thought to just pop it in, but hey, EPs are very in right now. Never worry about length, just worry about quality and the package as a whole.

And as for sound quality, the audio production for Take Me Home is absolutely gorgeous and strongly commanding. The sonic work in its entirety sounds about as good as any Six13 album, which is a huge achievement for a young group. Mike Boxer's influence and inspiration (and mixing contribution), and Nick Girard's overall pleasing production and strong mixing (plus arrangement contribution) gives this album incredible vitality and shine. The only track that rubs me the wrong way in the sound department is Incomplete, which features a shaky soloist (but he rocks the next track, Bilvavi) who doesn't quite have the range for this moody boy band number, a bass section that sounds too separated from the rest in the mix, and frequent percussion changes that are too offsetting to the groove of this song.

One arranger on Take Me Home truly rocks beyond rock, and that's founder/director Mordy Weinstein. This guy has "a cappella superstar" written all over him, and the five tracks he arranged or co-arranged are not only the strongest on Take Me Home, but are some of the strongest collegiate arrangements I've heard in awhile, period. To highlight some of his achievements, enjoy the way his unique syllables in Milim Yafot Me'eleh actually help carry the rhythmic intensity (I can't tell you how often this approach backfires), and listen to the gorgeous interlocking runs and line shaping in Mi Von (who wouldn't want to sing their part here?!). Wow.

Take Me Home is a very nice offering from a group you'll certainly want to keep tabs on.

Take Me Home is the debut album by Yeshiva University's Y-Studs, a group which formed in 2010. Impressively, it doesn't sound like the work of a group that's been together for just a few years: these guys formed, arranged these songs (most of the arrangements were penned by group members Mordy Weinstein and Hillel Landman), recorded them, and released an album, all between 2010 and 2012.

The album is not without some issues, but there are some great moments here as well. Be Prepared is my favorite — and regular RARB readers know how much I usually dislike a cappella versions of songs from musicals or movie soundtracks. The soloist here, Nate Jaret, really sells this song — he oozes with personality, making the performance a whole lot of fun to listen to. (You know Moxy Früvous's version of King of Spain? This recording reminds me of that.)

The rest of Take Me Home is a little more mixed. Alternating between songs in Hebrew and English language pop songs is a little disjointed, and it makes it challenging to listen to this album in order. Arrangements are equally mixed: the arrangers do a great job of picking syllables that reflect the song's dynamics; Milim Yafot Me'eleh especially has smooth transitions from open syllables to closed ones that give the song a great momentum — and Ely Shestack sounds great on the solo here. Other songs are less smooth; the beginning of Mi Von alternates between hummed notes and loud "ohh"s which is jarring, and Lu Yehi has some similarly harsh transitions. I would've preferred to hear the group ease into louder moments instead of diving into them.

Soloists aren't all perfectly-suited to their songs. The Lost soloist sounds a bit disconnected, and Incomplete starts out too low in the soloist's range. That's all part of being a new group, though: figuring out the best songs to fit the singers in a group, or figuring out the best key for the group to sing a song in. When the group gets it right, though, the song benefits: Bilvavi soloist Jesse Shore is captivating, and it doesn't matter that I don't understand the lyrics, because I can feel his passion and energy emanating from the recording.

Take Me Home has some enjoyably memorable songs as well as a few weaker moments that the group can learn from for its next recording. Overall, though, it's an impressive start for a newer group.

Order on the group's web site, or from Mostly Music.