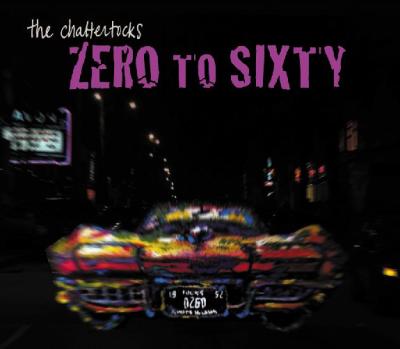 Zero to Sixty commemorates the Chattertocks' sixty years as Brown staples. And while this anniversary calls for blowing up balloons and throwing confetti, the music here isn't an extra delicious slice of party cake. The Chattertocks get the set-up for this anniversary album right: gorgeous art work, Boyer mixing, Girard editing, Sperandio mastering. The track list has a mix of nostalgia and party tunes, and a nice dedication in the liner notes to former Chattertocks adds a pretty bow for Zero to Sixty. But the voices are still getting ready for this event.

The most concerning aspect of Zero to Sixty is thin, uncreative arrangements. A popular technique among Chattertocks arrangers is having one part sing the same syllables on a string ad nauseam (like all those "noh" patterns in Sparks Fly, or endless "jun" runs in Why Do You Let Me Stay Here?). It's boring for the listener, and probably boring for the singers. Strong, compelling arranging is just such a foundational point for albums that if you don't have it, no amount of vocal showboating can really compensate.

But there really isn't any showboating to speak of, since some soloists sound wobbly and the backs still aren't bringing enough energy. I'm sure it's frustrating for the Chattertocks to read that I'm again not hearing enough intensity, but I think the only solution is to be louder and sassier in the studio — more performance acting. If you're in danger of noisy over-singing, a producer will let you know. Just don't let go of dynamic variances in your quest to sound more commanding, as being intensely quiet is just as important as being a confidently audible. Range is always the name of the game for creating vibrant vocals, and for Zero to Sixty, the vocals are just too kitten and not enough lioness. Big case in point: meekly sung Heaven Is a Place on Earth. Make Belinda Carlisle proud, Chattertocks. It's time to roar.

A few tracks sound more secure and full, more in-line with listener expectations for a seasoned a cappella group. The groove is pretty awesome on Price Tag, and it's nice to hear such happiness and fun. I also like the pretty atmosphere and forward movement on When You Were Young; soul singer Ursula Raasted fronting Cold Cold Heart; and for a mash-up (always dangerous territory), the Robyn homage comes across pretty well.

So the album as a whole isn't lost, but it's certainly colored with problems. There's something comforting about these long-lasting a cappella groups: it's genuinely interesting to hear what the Chattertocks are up to, though I hope the group starts an upward climb soon.

Despite its flaws, I really enjoyed this album. Consistently good arrangements, well sung backs, and a diverse track list makes Zero to Sixty a lot of fun to listen to. I couldn't help smiling through Miranda Pool's rap in Break Your Heart. Cold Cold Heart by Norah Jones is beautifully sparse. And Michelle Un's soulful lead on Find My Way is a great way to open the album.

The only track that isn't up to par is Why Do You Let Me Stay Here?. If you haven't heard the original song, you won't understand why the Chattertocks' version highlights some of the arrangement's weakest moments. At one point everyone cuts out for a really weak drum fill. The fill is in the original song, but the Chattertocks didn't take the time to execute it well. Imitation without understanding leads to poor execution. The function of the fill isn't simply to fill a space; it's a chance for the drummer to shine. A little more time spent recording the fill could have made it a highlight of the song instead of a blemish. Similarly, the arranger transcribed the guitar solo in the instrumental break and gave it to the sopranos. While this puts it in the "correct" octave, I'm not convinced it's the ideal octave for the part. If the goal was to recreate the character of the original guitar solo, that would have been done more effectively by belting it out an octave lower. Alternatively, the arranger could have kept the high octave and made the line more lyrical, a style that would have played to the strengths of the sopranos. As is, the transcribed guitar part is disjointed and awkwardly high for such a rhythmic part.

This album is almost great, but there are a few too many average soloists and awkward arranging moments. The soloist on Price Tag doesn't come close to the charisma of Jesse J, and the opening of Wagon Wheel sounds like someone forgot to autotune one of the parts. Most of the tracks have a few blemishes, which prevents the Chattertocks' great ideas and great singing from becoming an outstanding album.

Let me start off by pointing out that this album is expertly engineered. Each track is sonorous, clean, and just lovely to listen to from a production standpoint. I try to form opinions on engineering before looking at the names attached to each album, and in this case I was not surprised. Ed Boyer, Nick Girard, and Dave Sperandio have delivered in terms of sound quality. It is hands down the best thing about Zero to Sixty, and one of the things that makes the album worth coming back to.

First impressions are everything, and the Chattertocks have done themselves a favor by starting off with Find My Way. It's smart, sassy, nicely arranged, and beckons you to keep listening. Blair Perry, who boasts several arranging credits on Zero to Sixty, has a gift. Her arrangement of Price Tag is so much fun that I found myself humming it at my desk in spite of myself. Wagon Wheel is refreshingly dynamic, even if some of the background singers don't quite step up to the plate.

Unfortunately, other tracks don't pack the same punch. While the mash-up of Sparks Fly/Teenage Dream works conceptually, the arrangement is underwhelming. Both Let My Love Open The Door and Heaven Is a Place on Earth are dampened by lazy-sounding soloists. The Robyn Mash-up is begging for some vocal percussion to tie it all together. Details as they may be, these little things are what prevent Zero to Sixty from reaching that next level of greatness.

The inclusion of My Funny Valentine by the original Chattertocks is an adorable nod to the group's founders in its sixtieth year. It's apparent that they still have strong ties to these jazzy roots: Why Do You Let Me Stay Here? and Cold Cold Heart are two of the album's best tracks. That's not to say that the Chattertocks have a clear "element" though; Zero to Sixty contains plenty of variety, and the girls approach each genre with fervor.

With the creation of groups like Delilah and Musae, they say that 2012 is the year of the all-female group. Zero to Sixty supports that theory with its fun mix of well-sung covers. A little dash of confidence, a bit more risk-taking, and the Chattertocks will be a real force to be reckoned with.