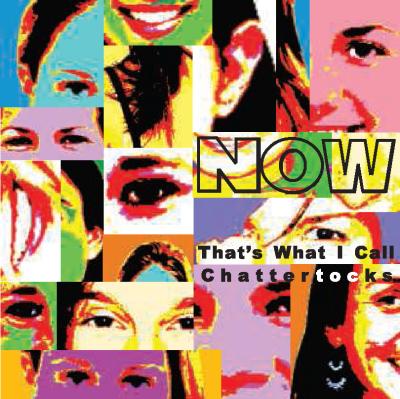 Judging by their last few RARB reviews combined with their latest album, the Brown Chattertocks seem determined to solidify their hold on the middle ground (2004 CARA album win notwithstanding, about which I'm still scratching my head). NOW That's What I Call Chattertocks is an exceedingly average album on just about every dimension.

Most of the tracks here could do with a 25% increase in speed, and a 100% increase in "oomph". The original Blue, while free-flowing and contemplative, pulses with a shimmering sadness that is lacking here. Modern female a cappella standards like Spiderwebs and Waterfalls are sanitized and listless. And beyond energy problems, tuning issues crop up with both background and soloist to an unacceptable degree. And what's with the "neer neer" syllables that still crop up occasionally? Let's leave them in the '90s where they belong.

In the past few years folks like the Loreleis, Divisi, Sirens, and Random Voices have proven that effects and more innovative arranging let all-women groups rock with the best of them. I'd suggest the music director of this year's Chattertocks hunker down with a few BOCA albums and maybe a collection of the last few female collegiate CARA nominees, and shamelessly imitate. The a cappella world is passing the Chattertocks by, and given their strong history it's a real shame.

In her review of the Chattertocks' 2003 album All Modesty Aside, Valerie Kolko said this: "With an average RARB score that has been steadily decreasing, it's surprising the Chattertocks haven't learned from their past. Six years ago, reviewers raved that Take It to the Bridge placed The Chattertocks at the top of the all-female genre. Today, sadly, All Modesty Aside doesn't deserve such praise. A break in the intense biennial recording cycle might help this group to reflect, reorganize, and make it back to being the best in their league."

Two years later, I could say pretty much the same thing about their newest album, NOW That's What I Call Chattertocks.

The Chattertocks refuse to learn from the past and obviously are not using their RARB reviews to grow musically as an a cappella recording group. It was duly noted in the review for All Modesty Aside (as well as for the previous album) that the Chattertocks' use of guitar-mimicking sounds "deeer," "weeeer," and "neeeer" was long ago outdated and are now inappropriate and only detract from the rest of the song. It doesn't take long, three seconds into the first song to be exact, before it is evident that the ‘Tocks chose not to heed RARB's advice. NOW That's What I Call Chattertocks is filled heavily with "weeeer" and "neeeer", and the sounds again detract from the rest of the music and turn the tracks into nothing more than laughable nostalgia to a cappella of the mid-'90s.

In fact, if I didn't know better, I would have assumed NOW... was recorded in the mid-'90s. Aside from one or two primarily unknown B-side tracks from recent albums, all of the tracks on NOW... are old, overdone covers that are neither innovative nor refreshing. The group's website claims, "our repertoire has certainly changed since the '50s." That may be, but you have to wonder how long ago that was written. Looking back at the track lists of their previous albums, it looks as if their repertoire has actually turned back time. 2003's All Modesty Aside and 2001's Classic had several current-to-those-times songs. NOW... does not.

The Chattertocks have fallen so far that it's time for a complete arranging overhaul and move to a more up-to-date and experienced recording studio and engineer. The arrangements are not cohesive. Each voice part sounds distant from the others: a "weeeer" over here, a "duh duh duh" over there.

My disappointment raged further because many of the problems on this album could have at least been dimmed if the Chattertocks showed some energy and excitement. Unfortunately too many songs that could have been fun with some zest (St. Elmo's Fire) just dragged for miles. What happened to all that fun they gave us on the hidden track? Was that really recorded at the same time as the rest of the album?

I always like to point out at least one positive in every review, so here it is. Cake's No Phone is the best of the worst on NOW... It's a simple, repetitive arrangement that is hard to mess up. Megan Peters' solo does enough to hold everything together and she shows some promise. I would have liked to have heard her let loose on something a little more challenging than Cake's small-ranged lead vocal.

A cappella, even female a cappella, has passed the Chattertocks by. Groups such as the USC Sirens and University of Oregon Divisi have made the statement that girls can make kick ass a cappella albums. And even those who haven't made that statement and are doing similar things as the Chattertocks, are just doing them better than the ladies from Brown (e.g., UCLA Random Voices, Elon Sweet Signatures).

I really can't sugarcoat this; I feel I will be doing the ‘Tocks a disservice if I'm not honest. I think this is something they actually need to hear if they're ever going to get better: It was difficult to sit down and listen fully through every song on NOW.... As a reviewer, I didn't want to shortchange them and only listen to portions of each track, but it was tough not to hit the "next track" button. If I weren't reviewing this album, it would have left my CD player just about as quickly as it went in.

Completely listless and at times ridiculous, NOW That's What I Call Chattertocks should probably remain locked up in Brown dorm rooms.

NOW! I have four words for you: beer neer neer neer! Oh wait. I guess "neer" isn't a word. It's also not a good way to make a guitar sound, although the Chattertocks have chosen to showcase this obnoxious, hokey string of syllables and many with a similar syntax on more tracks than not. Spiderwebs kicks-off the neer-neer festival and is undertempo to boot. Nothing worse than a slow neer-neer festival, if you ask me. Holiday in Spain is much warmer (Spain has a temperate climate, no?), though the lackluster arrangement and amateur vocal percussion is nap worthy. If I Could Turn Back Time introduces a new player on the Chattertocks roster: The Terminator on bass. The terrifying, robotic, criminal bass just won't die and even comes back for sequels on Only Hope and St. Elmo's Fire. I was near tears when I heard the butchering should-be-brilliantly-feisty St. Elmo's Fire takes, and incredibly boring Blue and 1000 Oceans need complete overhauls. Finally, a shaky and awkward choral arrangement of My Funny Valentine closes the album. Overall, terrible arrangements, goofy production decisions, and thin soloists encompass what we must now call the once reputable Chattertocks. And, may I add, swearing like sailors on your hidden track doesn't up the class factor. What happened to the Chattertocks of the '90s?

Surprisingly, there are some pleasantries on this album. A few tracks, If I Could Turn Back Time in particular, transform the first soprano line into a beautiful descant-style offering. Also, the blend on this album is quite sweet, and the song selection is pretty fun. Still, my fingers are crossed for a Chattertocks renaissance, and yours should be, too.