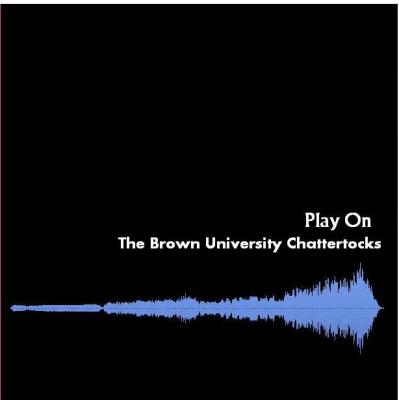 Play On, the latest album from female collegiate stalwarts the Brown Chattertocks, is a maddening exercise in inconsistency. For every step forward (the re-emergence of tracks on a Chattertocks album worth a repeat listen), there are a proverbial two steps back (odd song choices and inconsistent tuning), leaving this listener again in a place somewhere between disappointment and disinterest.

The Chattertocks make some spectacularly odd repertoire choices here, with a schizophrenic track list that veers between electronica/techno, standards, and the occasional pop song. They are best at the first of these genres, which harbors their most creative moments — the breakdown of What Is Love, the textured choruses of In the Waiting Line, and the entirety of Footprints. In the Waiting Line has a groove and pace that many recent covers lacked, while Footprints is a masterful reinvention of a Jamaican dance hall tune as a full-fledged alterna anthem. I could have mistaken these tracks for the latest from the Sirens or Random Voices, which made the weaker performances all the more disappointing. Why on earth would someone choose to team electronica with two songs from the Sister Act soundtrack, much less include imitations of the overbearing soprano of Kathy Najimy's character? Twentysomething, an attempt at jazz and scat, devolves instead into shrillness and shrieks. Finally, every group has their sentimental group song, but they do not need to put it on every album . . . so let's give My Funny Valentine a rest, shall we?

Song choice is not the only inconsistency with Play On. Though overall tuning has improved from NOW That's What I Call Chattertocks, there are still a few too many missteps like the awfully tuned opening of Easy Silence and pitchy sopranos on (Sittin' on) the Dock of the Bay and Breathe Me. On the solo front, I liked Zoe Chao's throaty delivery on What Is Love and Lovestoned and Michelle Jackson's grit on Come on Eileen. But I'm not sure it was enough to overcome the strained attempts at a baritone range on Swallowed in the Sea, or the overly theatrical lead on Twentysomething.

One area where the Chattertocks have taken an undoubtedly large step forward is production. Play On was mixed by Andrew Lefkowits, not a name familiar to me. A bit of help from Google revealed his role behind the scenes with the Harvard Callbacks' excellent album ...and three wishes. This makes a lot of sense, as the smooth electronica feel which marked 6 Underground pops up on all the best tracks here as well. The album is also thankfully free of the "neer neer" sounds that plagued the Chattertocks' previous work.

But banishing the "neer neer" alone will not catch the Chattertocks up to the many female collegiate groups now jockeying for a frontline position. Let's hope the exceptional album opener is the start of a true resurgence for this one-time leader of the pack, rather than just a one-hit wonder.

When comparing Play On to NOW That's What I Call Chattertocks in regards to improvement and imagination, Play On is stubbornly pedestrian. Pitch problems remain. Energy is still on sabbatical. Lots of Chattertocks still try their chops at percussion, and it still sounds basic and awkward. The production treatment on the vocal percussion is still unfortunate. And the Chattertocks still close with My Funny Valentine, which took a significant drop in listenability this time around. Even their liner notes look the same. While the rest of collegiate a cappella marches, even runs forward, the Chattertocks limp behind.

Footprints is the only clearly commendable track on Play On. With a unique Jamaican sound and strong soloists, Footprints is fun and exciting. But after Footprints ends, Play On stops and rewinds to NOW. What are the listeners to think when a music director arranges a track, and offers a very warbly solo that's out of her bottom range? Breathe Me lends a conclusion that the Chattertocks aren't serious about their craft. What is Love has endless potential to destroy other one-hit wonders given Zoe Chao's fierce delivery, but without the vocal skill from the rest of the group to pull off its largeness, it's a difficult listen. It's also under tempo and too long, two damning issues for a dance track. The vocal percussion breakdown which transitions into Lovestoned/I Think She Knows is elementary and skippable. Competing with the their VP breakdown for most skippable is Swallowed in the Sea, which features a soloist who all but drops out on her lowest notes. My patience for groups who decide to record a song when it's out of the soloist's range has run out after listening to the hit Coldplay takes here.

In fairness, many arrangements on Play On have more content and inventiveness than NOW. There are also moments of inspired singing, as heard on Jamie Cullum's Twentysomething and opener Footprints. These moments hold promise for future Chattertocks efforts. But until these ladies can sing reliably in tune, with confidence and gusto, and secure a better producer to mix their albums, they'll always be playing catch-up.

Listening to Play On by the Brown Chattertocks is a lot like riding the World of Energy ride at Disney World's EPCOT, circa 1993. If you ever had the pleasure of that experience, you'll remember that despite beginning with an entertaining journey through a land of animatronic dinosaurs, 90% of the ride is an outdated lecture on solar energy. This album's equivalent to animatronic dinosaurs is Lovestoned/I Think She Knows (Interlude). Virtually everything else here is the musical equivalent of a poorly-made film on energy alternatives. While the beginning of Play On is energetic and innovative, the singing and arranging on the second half are a giant step backward. Who are the Brown Chattertocks, and why do they sound like two different groups? Where do they disappear to after such a refreshing start?

The integration of Justin Timberlake's My Love into What Is Love is inspired, but the perfect transition into the sublime Lovestoned/I Think She Knows (Interlude) and the song itself constitute some of the best work I've heard from an all-female group in a long time. The Chattertocks take the repetitive Lovestoned and create a masterpiece. The textures, dynamics, and overall richness of the song are spellbinding. Julie Richardson deserves praise for both arrangements, as well as her arrangement of Oh Maria. Brynn McNally is another welcome voice on the album, contributing a lovely solo on Easy Silence and impressive vocal percussion on the Haddaway and Timberlake tracks.

Unfortunately, the Chattertocks I admire disappear too quickly. Lovestoned is followed by a hollow and unconvincing performance of Fontella Bass's Rescue Me. The trumpets may be cute, but the arrangement is unforgivably thin, with uncreative syllables and singing that doesn't build into the chorus. It seems the Chattertocks haven't yet mastered the art of track ordering. Putting your weakest track next to your strongest won't improve the former; it makes the listener suspicious of the stronger track.

On the remainder of the album, production is inconsistent. Arrangements and song choices have no element of surprise, and the singing is tame. The ladies can't seem to get the rhythm of their ska and jazz choices, taking all the fun out of Save Ferris with a goofy performance of the ska version of Come on Eileen. Jamie Cullum's witty lyrics about post-collegiate life on Twentysomething are spoiled by the over-the-top delivery of the soloist and an ear-piercing trumpet impression. In the Waiting Line is pleasantly produced, but the Chattertocks don't bring anything new to the table. This arranging offense is particularly detrimental for mellow "mood" songs, always ensuring that the track will become a test of the listener's attention span.

The Chattertocks should show their mischievous side, arranging songs that allow them to be sweet with a slight edge — good girls with a wink. An album with a little more of the creativity shown on What Is Love and Lovestoned would undoubtedly bring the Chattertocks to the forefront of all-female a cappella.