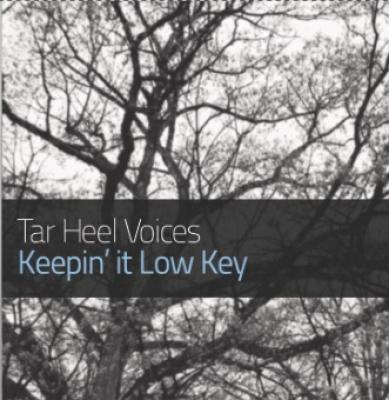 The collegiate mixed group Tar Heel Voices has to perform live and has to project. So the singers use percussive syllables to accomplish this. And they rehearse an enunciation that works live. The problem comes when these parts are expected to have the same emotional effect in the intimate space of a recording. That doesn't work. These "neer neer"s and "bow"s don't sound like guitars; they sound like people making funny noises. Even when the backs nail a simple "bah" or a "doh", it often sounds like a person clearly and distinctly pronouncing a syllable. So we listeners pay attention to it. But since it's nonsense, there's no reason to pay attention to it. What may have achieved success live, now achieves distraction. It nags more than mars, but Tar Heel Voices' scores suffer from this universal problem.

Thankfully the leads appear blissfully unaware of the issue, each delivering a wealth of the soulful, quirky, and heartfelt — exactly as needed, and with riff and personality to spare. No Air's Erika Walker and Shriya Soora bring the R&B wow factor. Wally has a true modern Broadway feel to it even while keeping a pop sound. Greg Pittard sounds a little like a youthful Aaron Neville on both the smooth Easy and the range-y Happy Ending. Maggie Saunders and Natalie Pelletier add firepower to Lean On Me and Weika Walker just destroys Many the Miles. In fact, all the soloists are impressive in their own right, but the album's best may be Machine Gun's Amberly Nardo, who delivers a fascinatingly unique merger of pop, R&B, and alternative stylings to her outstanding lead.

Shriya Soora pours soul into Heart of the Matter, doing justice to Indie Arie's popular take on the original written by Don Henley, Mike Campbell, and J. D. Souther. That basic writing credit is nowhere to be found on this album, though. None of the composers for any of the songs are credited. We learn instead that a given song was "originally performed by" a group or artist, even when the credited group is hardly the first to have done so. This is inaccurate, obviously, but it also bespeaks of a deeper issue: the role of the performer. Performers are charged with interpreting compositions. That is their function. To accomplish that by directly imitating other performers is to pass on originality. To credit only the interpreters and not the composers implies that you aren't even aiming for creativity — something that simply isn't true for the Tar Heel Voices, who do put their own stamp on these leads. Moreover, a lack of credit is disrespectful to the writers (without whom there would be no album) and also calls into question the legality of the recording.

The wrap up: you'd be crazy to miss any one of these leads. They are spectacular throughout. And though the ensemble is well-rehearsed, the arrangements are too often at cross purposes to the songs. This leaves songs with some parts excellent and some parts considerably less so. If you are the kind of listener who can compartmentalize, then Keepin' It Low Key is well worth the purchase.

Keepin' It Low Key is an apt name for the latest album from UNC's Tar Heel Voices. For fully two-thirds of this release (the opening six and final two of twelve tracks), it might just as well be called "Keepin' It Mid-Tempo". Painfully so.

This is not a new problem for this group as evidenced by RARB reviews of years past. And it's one that is so easily fixed that it becomes that much more annoying. Even if the bulk of the repertoire shades towards a female R&B/mellow pop feel, at least break it up a little! Don't give me No Air and follow it up immediately with Wally, where the two songs sound nearly identical save for stronger soloists on the former.

To be fair, some of the blame here also falls on arranging and energy. The group's arrangements have improved a bit since last I heard them. There is still a tendency to rely much too heavily on lush block chord pads on "ooh", "ahh", and "ohhh" (or variations thereof), but in the more interesting moments — be they successful (parts of Heart of the Matter, parts of Closing Time, most of Many the Miles and elsewhere) or less sucessful (parts of Machine Gun) — there is an attempt at texture and complexity that pays dividends. Like many groups, there is still a lack of development as the arrangement progresses and bridges are generally letdowns rather than the transformative moments they should be. THV also has a few too many exposed imitative syllables that make me nostalgic for the a cappella of my college years — "bee-ow beeow" for electric guitar — but can't help but register as cheesy. With the toys and tricks of Liquid 5th at the group's disposal, surely those moments could have been rendered with a bit more finesse.

Also plaguing THV is a decided lack of energy in background parts. Some of this is also an absence in dynamic variation so that a repeated background figure not only drones on and on but is also so present in the mix that it becomes obtrusive or even competes with the leads (as it does in What Can I Say). But listen to (the utterly misguided and unremarkable) Only the Good Die Young, and (the mechanical and markedly uninspiring) Lean On Me (why on earth is this song even here?), and you can almost hear the boredom. It's so frustrating because I have to believe the group doesn't truly feel this way — yet that's what comes across.

On the plus side, the group is blessed with several talented soloists — best among them: Shriya Soora and Erika Walker, who duet on the opener and get the chance to solo on Heart of the Matter and Many the Miles respectively. Also deserving of notice is Greg Pittard, who lends an easy cool to an otherwise straight-ahead, super-plain arrangement of Easy and then does a nifty job with the ranginess of Mika's Happy Ending.

I can't in good conscience recommend picking up this album, though checking out Heart of the Matter and Many the Miles might be worth your while. As reviewers have noted in the past, THV has flashes of being a solid group. But those moments are fleeting. And the rest of time, their low key-ness borders on the somnambulant. Zzzzzz...

The third track, Easy, is exactly what I wanted to hear on Keepin' It Low Key. Greg Pittard sounds great on the solo, the percussion is interesting without distracting, and the background is tight on soothing countermelodies. Sure, the arrangement is a little repetitive, but the mix is so clean and the groove is so effortless that you can relax the whole way through. I just wish I could say the same for the rest of the album.

The arrangements suffer from a lack of creativity that leave me feeling more impatient than relaxed. Almost every song is your standard pop AABA structure, with only very superficial variation between each repeat of the verse and chorus. This is passable in the up-tempo Wally and Many the Miles, but it's quite draining in the slower No Air and Heart of the Matter. Classics like Only the Good Die Young, Lean On Me, and Closing Time warrant some emotion and innovative arranging to stand a chance on a contemporary album; instead they are sterilized with less-than-enthusiastic backgrounds and sampled percussion with too much reverb to really ground the mix. It is especially sad to hear Samson, an arrangement that comes across so beautifully in a YouTube performance, stripped of its flow and feeling by a rigid treatment in the studio. If the Tar Heel Voices want to sing pop songs from top to bottom, they will need to find ways to keep things interesting from top to bottom.

The production does little to spruce up the arrangements. Given some of the impressive work coming out of Liquid 5th, I was surprised to hear the blips that made it onto Keepin' it Low Key. The click-track at the end of Heart of the Matter, the rattling microphone stand at the end of the What Can I Say, and the chorus of salivating lip smacks at the start of Many the Miles are jarring in an otherwise pristine vocal environment. The sonic balance is also unnecessarily heavy on the bass and tenors, so that you might want to boost your treble to get some more life out of the mixes. Greg Pittard and Colby Ramsay did well to give space to soloists and accentuate important riffs, but they should have been mindful of a few of these issues to give the album a more polished sheen.

Over the past decade the Tar Heel Voices have delivered to RARB four middle-of-the-road albums. Keepin' It Low Key falls right in line, with arrangements and production that leave something to be desired. Fortunately the group has a strong cohort of soloists, packs a good supply of collegiate energy, and sticks to user-friendly songs. This blend has earned the Tar Heel Voices some recognition from the Sing and Voices Only compilation albums, including Wally from Keepin' It Low Key. The Tar Heel Voices have shown an aptitude for learning new tricks, and I look forward to hearing them hone their ears for arrangements and production for their next release.