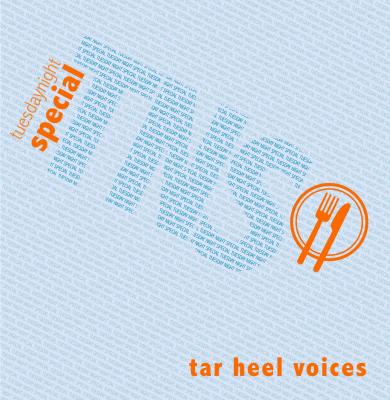 Elie Landau wrote of Tar Heel Voices's release, Would You? — "it's ok". That about sums things up on Tuesday Night Special — at least for the first few songs. Polished nicely with full bass, well placed percussion and a good blend, the arrangements and leads are easy to listen to. The overall energy is like the quiet hours of a long winter road trip. The road calls, friendships abound, but a sad chill of turning seasons casts a dull blue glow over everything. Again, at least for the first few songs, until Tar Heel steps things up a bit.

Kiss From a Rose stands out with Shriya Soora's unexpectedly soulful delivery. Moving and vulnerable, this delivery marks the first head turn of the album.

And it's a turning point on the album. Other Side of the World follows and here too the lead's delivery is a noticeable step above. What Goes Around.../ ...Comes Around boasts a rich, energetic and perfectly understated back-up. Put Your Records On is absolutely charming and Tomorrow Is a Long Time has a lead that will melt even if the back-ups are a bit too percussive for my tastes.

It's an argument for programming wisely, a reminder of what a challenging task it is, and an underscore of its importance. Stick with Tar Heel Voices's latest and it'll deliver a few very pleasant surprises.

Next to the Tar Heel Voices's previous album, Tuesday Night Special feels less authentic. Where Would You? kicked along on the strength of committed soloists and a genuine seductive atmosphere, this incarnation of THV sounds as if they are struggling to find a sound. There are no showstoppers on this album to grab the listener's attention. Everything from soloists, to arrangements, to energy sounds firmly planted in the middle of the road, as though the group didn't quite want to settle on any particular direction. Unfortunately the result is an overall step back for the group.

To me, Would You? was like a mysterious stranger. I was consistently intrigued by the edginess of track list and the often seductive confidence of the group's delivery. Tuesday Night Special is more like Andy Bernard from The Office. It is eager to please, but presents too many identities, not succeeding at any.

The album begins similarly to Would You? with four mid-tempo tunes ranging from simmering anger (Before He Cheats) to melancholy (Lover, You Should've Come Over), none with convincing enough soloists to really sell the song. Old school vocal guitars abound (wow, wow, now, now) and further kill the mood.

Things take a brief 180 at Trouble, which offers both the first real glimmer of sexiness in the solo, and the first legitimate up-tempo groove. Those "wow now" guitars are still hanging around, but it got my head nodding and I was ready for things to pick up. Then came Misery Business and the group was right back to the vibe of earlier in the album. The soloist tries mightily to carry the tune, but her throaty delivery comes off as more cutesy than threatening. Once Everything rolled around, I was pretty checked out. Another so-so soloist trying too hard backed by a vanilla arrangement. More of the same.

There is one bright spot on the album, and that's Kiss From a Rose, which manages to capture a lot of the seductive quality that I liked on Would You?, and showcases a soloist with real chops and grit. I would have suggested bumping the tune up a key or two though. I sensed a lot more power in the soloist's upper register that she was never quite able to showcase. The addition of a little pyrotechnics could have done wonders for the track.

Next time around THV either needs to do a much better job of balancing the track list, adding more up tunes and spacing the songs so that they flow more easily into one another, or they need to work on revitalizing the quiet energy of their mid-tempo jams and ballads to make them much more engaging. There is a big difference between earnestly selling a song and really communicating emotion, the latter of which is crucial if your album is mostly slower songs. Tuesday Night Special tries too hard to make you believe what the group is selling. This group has proven it's capable of better.

Immediately after hearing the first notes of Tuesday Night Special you know that the Tar Heel Voices are accustomed to traveling in a nicer ride than the average collegiate a cappella group. They have a new car smell. You notice it right away, it lingers throughout Tuesday Night Special, and you feel as if you are special indeed to take a spin in the car. New cars are great; the smell, the shine, the excitement of parking it in your driveway for the first night. A few weeks later, you wake up and realize it's just a car. The newness has worn off and every day from then on you'll look at the car itself to determine its value. Tuesday Night Special is a new car, but what kind of car is it and how should we determine its value?

Let's start with the engine. Soloists seem to power a group to greatness or shine a brighter light on the weaknesses and flaws of the group if not up to spec. The solos on Tuesday Night Special are full speed ahead. You're sure to feel your head snap back when Laurie Graham (Before He Cheats) or Jessica Dean (Misery Business) rev up the engine off the starting block. You'll also feel the hum of the horses pulling the chariot as Carter Lynch provides a full-charged Stone Temple Pilots re-make of Plush.

Handling? The blend is balanced and conscious not to overpower the soloist. Everywhere and Kiss From a Rose are prime examples of all the parts working together efficiently to create a smooth ride.

The Interior and Fine Touches categories come up high for Tuesday Night Special. Let's be frank: this machine sounds smooth and refined. Liquid 5th Productions does a nice job of drawing the listener's attention away from the one draw-back of this model: Driver Excitement (Innovation/Creativity). There's nothing above average with the way the Tar Heel Voices arrange songs. They sound good, but become predictable quickly. Any one track by itself will be an enjoyable listen but the style grows tired over the entire disc.

Driver Reliability is decent. Although many aspects of Tuesday Night Special neither attract nor detract, I think I'll find myself coming back and appreciating the work on Plush and Tomorrow is a Long Time. The latter is probably one of the better simple-yet-complicated arrangements I've heard since Amazin' Blue's arranging prowess on Paul Simon's Spirit Voices (heard on Raising the Bar in 2001).

The Driver's Manual (liner notes) is as good as any out there today but leaves out a very important fact: original artists. If I didn't know any better, I'd think Tar Heel Voices was trying to pass off other artists' songs as their own. Fortunately, I knew many of the original artists, but was left in the dark for the rest. This would be a good priority to include on the next album.

If Tar Heel Voices can become less predictable in their presentation, they may have a fine automobile worthy of high praise in the very near future. Until then it's just an above-average ride, which might be good enough for some listeners.