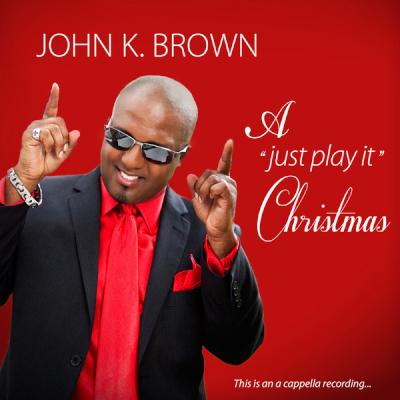 Rockapella singer John K. Brown's A "just play it" Christmas is somewhere between an album and an EP; there are ten tracks here, but four of them are intros/filler tracks, and one of them is a sing-along of a previous track.

The five tracks that remain would make a solid R&B religious holiday album on their own, but keep in mind that this is a very different style from most contemporary a cappella that comes RARB's way. The beginning of O Christmas Tree is mostly percussion and solo with a few flourishes thrown in for good measure; it blossoms with a really awesome buildup in the bridge. The call and response track Angels features Brown speaking the lines and the choir singing them back to him; musically it's great, but stylistically it might not be for everyone. What Child Is This has a groovy R&B beat beneath it, which turns the original song on its head. Three Kings Fever is as much of a party song as you could have in a religious Christmas tune (no joke: the singers are exuberant in their proclamation, "We got a Jesus fever!").

The percussion on this album is on point, the production is glossy, and the singing is beautifully on-pitch. So why the average overall score of "3"? Short answer: all the filler and all the talking really detract from the rest of the album. Listeners don't constantly need to be reminded that they're listening to an all-vocal album, and those little interlude tracks kill the album's momentum. As I said at the top of the review, the five remaining songs would be a good EP for those interested in R&B and/or religious holiday albums; their tone (and percussion) get a little repetitive, but they are well-performed. John K. Brown is clearly a talented singer and producer — the choir he's pulled together for A "just play it" Christmas is great. It's just not easy to listen to the album as he's presented it, from start to finish, more than once.

Former Rockapella tenor John K. Brown is a stunning talent with a rifftastic, sky-high range and a palpably Christian focus. A "just play it" Christmas, his third solo release, features his always enjoyable solos and his smoothly layered back-ups. The tracks are greatly enhanced by the indefatigable agile mouthings of one of the founding fathers of vocal percussion, Rockapella's Jeff Thacher. (I assume; he isn't credited.) There are also a few guests who add a little spice here and there, including a very enjoyable rap (Three Kings Fever).

Where the album goes awry is in its voiceover work. Brown can sing his butt off, but he's a tough listen when it comes to speech. Sometimes evoking a used car salesman, sometimes an SNL parody sketch like "What's Up With That?", it's hard to find the authentic Brown in here. He delivers like he's on stage, selling it to the last row, prancing and dancing to keep our attention from drifting. For the right live audience, I bet it works like a charm. After all, Brown does work in the ministry. But albums aren't churches. They aren't arena concerts. They're intensely intimate. And like stage make-up, what works as beauty from afar can appear clownishly exaggerated upon close inspection.

The album lists ten tracks, but it's unlikely that the casual listener will play tracks 1, 4, 7, 9 or 10 more than once. The first is Brown introducing himself in the 3rd person. Track four tells us that everything is a cappella. Seven is practically identical to four. Nine is a cute, little ring tone; it's very short and the only lyrics are "Come on and answer that phone." (Particularly useful if you tend not to answer your own phone, but want to change your ways.) Ten is listed as the "vocalization" track for eight (Christown). The CD provides "instructions": sing verse 1 on your own time then continue with the track.

So that leaves five songs. And because tracks 2, 3, and 6 heavily utilize John's spoken voice throughout the singing as a kind of gospel commentary, that choice colors 60% of the album's real songs.

Having said all this, John K. Brown can and does sing his face off. The album is filled with great beats, rich harmonies and killer leads. Gospel-influenced R&B is the lens through which Brown interprets these Christmas classics, and each has exactly the kind of twists needed to modernize them, with Brown often weaving in plenty of original material as well as other Christmas quotes into his effective arrangements.

Christown starts with Oh Little Town of Bethlehem and then moves into some original riffs. God Rest Ye Merry Gentlemen, Auld Lang Syne and Emanuel all make appearances, and the piece does a solid job making it all sound cohesive. Angels boasts a very cool, vocal mouth harp effect over a Lion King-esque lilt. What Child Is This has excellent, patient use of space and some enjoyably melodic backs. Three Kings Fever delivers playful hip-hop, using cute special effects on the wise men's voices and featuring "Wis'd and the Red Panda" to add the right feel on the rougher edged rap and backing vocals.

And throughout it all, John K. Brown's smooth, powerful tenor just sails on, effortlessly riffing and belting out every note. His tone is bright and clear, with just the right nasality for the genre. He truly possesses the kind of voice that could make the phone book sound good. For his fans, this former Rockapella mainstay is always sure to please. But of his three solo projects, this one's few, but key missteps, insure that it isn't the strongest.

There's little that is more infectious than well-performed gospel music, and the prospect of adding Christmas into the mix seems absolutely irresistible. John K. Brown is one of contemporary a cappella's most inventive talents, and his virtuoso singing skills are well served on A "just play it" Christmas. From the driving pulses of reinvented Christmas favorites like Angels We Have Heard on High and What Child Is This to the well-executed build of Christown, A "Just Play It" Christmas is a worthy addition to the Christmas canon.

While Brown's previous effort, Unplugged, was a flurry of vocal mastery, A "just play it" Christmas is considerably more restrained. This works well in some areas — the majority of tracks are well-constructed, pleasing interpretations of Christmas songs with strong beats and excellent vocal hooks; there is nothing overwhelming about them. However, in comparison to Unplugged the album feels like it's only operating on one level: there are very few "wow" moments, and the album as a whole suffers from a lack of ambition. As a side note, it is rather fun that Brown includes the background tracks for Christown as a separate track, so fans can sing along and put on their best John K. Brown impression.

There's no question that John K. Brown is one of a cappella's brightest stars, but A "just play it" Christmas is not the album it could have been. If you're a fan of gospel a cappella and Christmas music it's a must-buy for sure, but if you're undecided on those areas of music it's not likely to make a convert out of you.

This album is available for download on iTunes and Amazon.com, and at www.projectjkb.com.