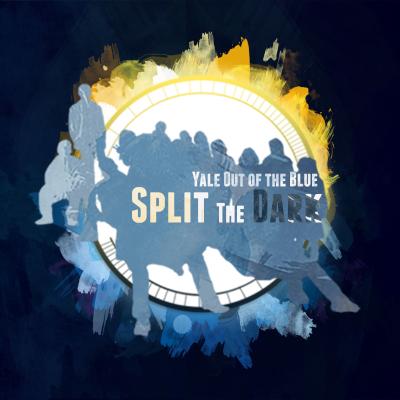 Collegiate a cappella really sounds great now, huh? The level of production and technical wizardry associated with the average college release absolutely eclipses even the best collegiate albums ten years ago. With every passing year I've worked as a critic for RARB, my standards of what a successful collegiate album should be have been raised higher and higher as inventive, terrific albums become more and more frequent in the industry.

Which brings me to Split the Dark, by the co-ed singers of Yale's Out of the Blue. When I started reviewing for RARB, Split the Dark would have been considered an excellent effort. The tuning and blend in the backgrounds are impeccable, song choices are appropriate and the production is sparkling. Now though, Split the Dark slides in comfortably with the above average collegiate set. This is far from a bad album — every choice exudes professionalism and skill on the part of Out of the Blue, but there's little here to raise the album above the rest.

First, allow me to sing the praises of the backgrounds. Lush when they need to be, cutting at other times, the blend and tonal quality of the background vocals are pitch perfect. Bass lines are rarely excessively vocal, and the percussion for the most part avoids being impure and spitty. This is not only a credit to the singers and the producers behind the album, but also to the well-crafted arrangements that make up the album's core.

Solos are a problem. With a few exceptions (a spirited lead on Picking Up the Pieces, for instance), the soloists are nowhere near the level of the backgrounds. A number of the soloists sound distinctly like amateurs up against professional backups, which gives the album a feel not unlike karaoke night. The solos are often dynamically flat, and lack any real drive or fire. If you're drawing on Elton John by covering Your Song, you've got to sell the passion of the words, but none of that passion or spirit is felt in the interpretation here.

Like I said, this isn't a bad album. Nothing is offensive to the ears, and the whole album floats by pleasantly. It's become clear in the industry, though, that as standards get higher the middle ground has to rise up as well. Split the Dark is a fine album, but it's a fine album in an increasingly crowded field.

By the middle of track five on Split the Dark, you start to wonder if the group will ever make good on its promise. The first half of the album is atmospheric with mid-tempo songs full of lush and dark colors that tell the story of an intense relationship which is slowly slipping away towards eventual breakup. Passion, desperation, and heartbreak peek out from behind the curtain of crisp, punchy production.

Somewhere in the middle of the fifth song, Too Close, the tension peaks in the form of a literal and metaphorical breakdown which is staggeringly powerful. Next, the emotional noise peaks with the crunchy pre-chorus in David Guetta's She Wolf (Falling to Pieces). Finally, as promised, Morning Comes, in the form of an optimistic and bright beginning to recovery. It's just in the nick of time, too, because while the first half of the album is sonically pristine and features some nuanced and emotional solos, it's also a little heavy with the weight of this failing relationship. Fortunately, the second half picks up the pace, if not necessarily always the mood.

The best track on the album, I'd Do It All Again, is a bubbly, sultry revelation with a stunningly personal solo from Sana Sharma and a gorgeous arrangement by Sharma and Daniel Reardon. Other interesting arrangements (Too Close, She Wolf) and compelling solos (Blank Page, Morning Comes) are thoughtfully enhanced by the experienced and skillful hands of Ted Trembinski of The Vocal Company (tracking, editing), Ed Boyer (mixing, producer), and Eric Scholz of Liquid 5th Productions (mastering).

Overall, Out of the Blue has put together a complete and polished product, both sonically and in the packaging (with liner notes that properly credit everyone, including the authors of each song). It is one of the few successful programmatic albums I've heard from a college group in quite some time, telling a story with consistent songs and emotions. If you sense a "but" coming, here it is: this album is a heavy meal which doesn't really lend itself to nibbling. Other than I'd Do It All Again and Too Close, the songs fit the story, but don't necessarily stand on their own. If you're ready to sit down to a full five-course meal, this album will be an excellent destination. If you don't have time for such a thorough listening experience, at least grab tracks four (Blank Page) through eight (I'd Do It All Again) and enjoy the dynamics, ambiance, and production — the entrees, and the best part of this meal.

According to its website, Split the Dark is Out of the Blue's (from Yale University) 13th studio album. I translate this to mean that the group is familiar with the recording process and should have a fairly strong grasp of the technical elements that elude beginner groups. I will admit that I was rather impressed. The group succeeds in producing an aesthetically pleasing sound as well as captivating arrangements within its niche style, as expressed in their disclaimer "We are OOTB, and we sing pop/rock a cappella." However, this does not mean the group falls into the "predictable" column, as this album has plenty of commendable features and even moments of surprise.

For starters, OOTB does an exceptional job of capturing raw emotions in the songs they perform. Truly the easiest way for a listener to connect with music is to present an emotional appeal that cannot be ignored. OOTB does this very well, specifically in Blank Page, I'd Do It All Again, and Picking Up the Pieces. All three female leads are absolutely phenomenal in their own respective ways, backed by well-crafted arrangements.

Blank Page is a wonderful ballad from start to finish, with nicely placed harmonies. Kate Taylor Mighty's contrasting tones that come across in the solo are the icing to the entire song. I'd Do It All Again is smooth and soulful, making the song an easy listen, while Sana Sharma holds your attention with a well-controlled vocal lead. Picking Up the Pieces is the powerhouse of the trio, showcasing high-energy and a strong lead by Yuvika Tolani who can deliver the song's lyrics with much conviction.

What also factors into the positive aspects of Split the Dark is its clean sound that comes across throughout the album. The Vocal Company, Ed Boyer, and Liquid 5th Productions are all credited with having a hand in the production work. Voicings throughout songs are well-balanced, effects are used tastefully, and the listener can indeed tell that human voices are the instruments behind the work.

The overall album is nicely put together and is so close to being a top-level album. What holds it back is the occasional imbalance of appropriate solo and song selection, pushing the creative envelope, and the desire to relisten to this album for specific songs only. I feel as if I Won't Give Up was a bit misplaced on this album given the other included tracks. Too Close is bordering on "songs that are becoming overdone" and needed more dynamic arranging to help it really stand out. And finally, I see myself coming back to this album to hear specific songs rather than the entire album, which is why it scored a "4" on "Repeat listenability".

But I cannot deny that given the culmination of multiple factors, this is indeed a really good album. OOTB has a project here that the group should be really proud of and an album that you all should check out.

Visit the group's online store for more links and information on Split the Dark.