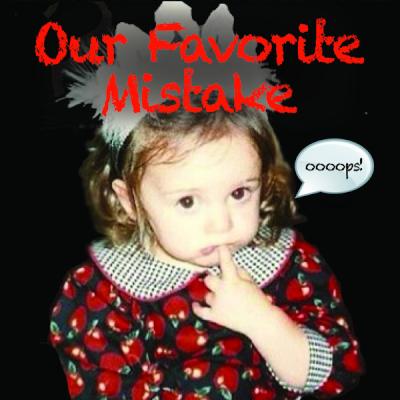 Making a niche for yourself covering famous '70s and '80s music (and perhaps a notable '90s tune) remains pretty awesome. But the execution of such well-loved iconic material poses many risks, and Rhythm Method falls short here in transporting us back to a time of big hair and lighters in the air.

I tried, but didn't find any of the tracks on Our Favorite Mistake compelling for their arrangements, because too many are repetitive, thin, and sound easy instead of bold. Plus, it's not good to do so many carbon copies of the originals, which is definitely present on Our Favorite Mistake. When debuting originally, these songs largely rocked because of the keyboards and slammin' guitars, and if you're going to turn these elements into syllables ... danger, danger. Instantly hear what I'm talking about on Runaway and the "det det det!" approach. The sopranos also tip toward the young and sweet side, when the women of this era were not known for their gentleness. Inject this off-sound into the ho-hum arrangements, and I'm left unconvinced about the effectiveness of this material. I certainly enjoyed the arranging on the group's release Plan B, making this area more frustrating. Finally, it's always grating to listen to a group spritely sing "key change!"

What goes really, delightfully right here is Crazy For You. The mixing work, courtesy of James Gammon, is totally chilling. I feel like slow dancing at prom when I listen to this track. And those little breaths near the end over the heartbeat drum? S.O.B., could that get better? No, it could not. Plus, soloist Melissa Taibi sounds like she's been passionately practicing this one into her hairbrush for a solid decade. You need this track, and that's that.

Finally, there's inconsistent audio work here, with the most noticeable issue perhaps stemming from the mastering process. If you play this album all the way through, you may hear some questionable sound output differences among the tracks, and the curiosity of it all is distracting. Yes, there are a plethora of mixers on Our Favorite Mistake; I'm sure this played a part. But the "plethora approach" is extraordinarily common now, and I haven't heard such marked discrepancies in the final finished sound from my speakers in the past. Just saying that something's up here; it isn't the smoothest.

Our Favorite Mistake has but one amazing standout, but again, the concept is tight. I'd love to hear an album from the Rhythm Method featuring Lost Songs of the '70s and '80s; those songs that sound so familiar you can almost sing along to them, but the exposure hasn't been great enough to really know them. This, coupled with more creative arrangements, could really be something.

Binghamton's Rhythm Method has a clearly-defined scope: this group sings songs from the 1980s. On their latest album, Our Favorite Mistake, a few 1970s tunes and one mid-'90s(!) track sneak in, but all songs are within the scope of music you'd hear on a Best of the '80s! weekend on mainstream radio. Overall, this is a fun album: the singers are clearly having fun here, and the group's strong performances makes this album very easy to listen to. (There's a reason I gave this a "5" for Repeat Listenability, amid average scores in all other categories.)

Most importantly, the Rhythm Method singers have figured out how to sound engaged when they're in the background. You could strip out the soloist from any of these tracks and still understand the urgency/drama/tenderness/etc. of the song, just from how the backs sing. Many of these songs also feature some solid phrasing in the backs: Crazy For You has some great dynamics, and the arrangement really moves in a way that doesn't usually happen for slow ballads — kudos to arranger Seth Makarowitz (a Rhythm Method alum, apparently) for this. There are also some memorable soloist performances — Melissa Taibi for Heartbreaker and her portion of Jump especially stand out. The group also makes some smart choices with album tracking; the Livin' on a Prayer snippets at the end of Heaven Is a Place on Earth lead smartly into the Bon Jovi tune Runaway.

Still, beyond these broad strokes, there are some details that don't quite deliver. Beneath the group's confidence are some issues that should've been ironed out. There's some pitchiness in the transition from Runaway to It's My Life. The beginning of Heaven Is a Place on Earth is really shaky, and singing "key change" at the appropriate time might be hilarious in concert but comes across as amateur on a recorded album. The songs that don't have good phrasing in the back really drag (Uptown Girl, I'm looking at you). The handclap percussion really needs to go (Uptown Girl, Long Time) — it's really grating on the ears, and it sounds cut-and-pasted. Gangsta's Paradise is not at all a convincing song choice for a group of college students. The choice to use two soloists in Jump doesn't really make sense either, and they don't blend well with each other.

Overall, Our Favorite Mistake isn't perfect. But these singers' enthusiasm and musicianship is good, and it's a fun album to listen to. I can't emphasize my Repeat Listenability score enough: this is an album I listened to over and over and over again, which is not something I typically do with albums I rate a "3" overall. (And anyone who knows me knows that I really can't stand most of the music from the '80s! So kudos to Rhythm Method for getting me over my personal bias — this album is fun!) That said, if you look too closely below the hood, there are some problems here; with a little more focus and attention to detail, Rhythm Method could knock a recording out of the park. But, a message to these singers: please don't ever lose your sense of enthusiasm or your engagement with the song. These two factors are nearly impossible to teach or explain, and you all make it seem so natural and easy.

From the odd, yet provocative artwork I could tell that Rhythm Method was intent on taking the listener on an interesting survey through a decade heavily influenced and marked by the glam, bravado, and sheer style of some of rock's most essential artists, like Bon Jovi and Van Halen.

I found the production on Our Favorite Mistake quite clever in its application of effects and filters to harness the '80s flavor that Rhythm Method strives to replicate. An example of this is heard in the vocally produced "guitar riff" in early parts of Long Time and the drumming effects added to the vocal percussion in Heartbreaker to capture the quintessential "punchy" sound of '80s drums.

The arrangements themselves aren't anything you haven't heard before, but the consistent energy and intensity and natural quirkiness of Rhythm Method provides a fun sense of charm for the listener. Rhythm Method may have technically cheated a bit by including Coolio's Gangsta's Paradise (recorded in 1995), but their version of it does the song some justice. I appreciate how the soloist doesn't try too hard to sound like Coolio, and rather lets the natural twangs of his voice take ownership of the song.

The soloists throughout Our Favorite Mistake are rock solid. Their voices are well-chosen for their respective songs and they do well at taking an appropriate command of the songs. One performance that stood out while listening was the duet on the last track Jump, with the vocalists doing a great job of blending and feeding off each other for energy. My only criticism of the soloists is that I find their singing a bit too clean and trained sounding at times. This is an issue mainly for songs like Bon Jovi's Runaway, where I think a little bit of added grit to the enunciation could help give it some edge.

In all, Rhythm Method's album is a solidly crafted release worth a listen, especially if you're a big classic rock fan. There are certainly enough good hits on Our Favorite Mistake to invoke nostalgia for those yearning for the '80s.

This album is available on iTunes or by emailing the group at rhythmmethod@binghamtonsa.org.