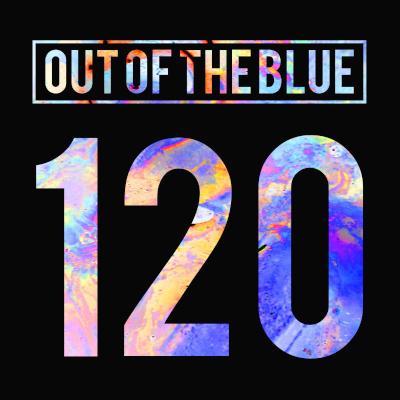 Big and bold singing, and powerhouse densely-packed arrangements, just aren't in Out of the Blue's bag of tricks. I do appreciate this group's refreshing delicacy, often presented like fine china on 120, when it's focused, tight, and interesting. You'll hear this softer, open arrangement and delivery style immediately on Sunrise, which is indeed focused, tight, and interesting. Smash Into You is served on another porcelain dish, but it doesn't have the aforementioned qualities, coming across with a dull finish. And that's really the moral of the story for this style of singing and arranging: if you're not going to dish it out loud and hard, it has to be that much more compelling to stay with you.

Again and again, the group's successes or missteps come from what's happening in the arrangements of 120. The group continues with Bad Moon Rising, where the singers abandon the porcelain for edgy intensity, but it sounds too forced and clunky. Repetitive arrangements or harsh background syllables pop up a few times on 120, contrasting the pleasant soothing sound we know Out of the Blue is capable of, heard especially on Cheating, Changing and What Now (it's especially unfortunate on What Now because lead Michaela Murphy is awesome). But sometimes, the arrangements align and there's magic here, like the wonderful one-two punch in the middle of 120 with Say Something and Chasing Twisters. Sung with great emotional authenticity with a duet made to be paired, Say Something explores multiple sonic levels and couples this with a startlingly effective use of silence. Just the opposite, Chasing Twisters gives us our first and only fire on 120, an exciting one that we really don't want to put out. We leave 120 with a movement from Muse's Exogenesis, featuring no lyrics until nearly two minutes have passed. It's cool and unique, and I'll take more work like it. In summation, the charts are pretty inconsistent here in both sophistication and listenability.

120 won't rock your world, but it will give you dashes of good music.

In my critique of the last Out of the Blue album I reviewed for RARB, 2011's 16 Edgewood, I was most disappointed with the group's choice of soloists, none of whom was a great fit for the songs the group chose.

Four years later on 120, Out of the Blue has improved its soloist selection, but the group's arrangements and backing vocals are way behind the curve. Extended block chords permeate most songs here with prolonged, motionless "aaaaah" and "oooooh" phrases. This sucks the energy out of these songs and makes the singers sound disinterested in their performances. These songs absolutely need more dynamics: long, held notes can work only if there is some movement there or some ebb and flow in the phrasing to help tell the story in these songs. I weep for soloist Reine Ibala, who nails all kinds of vocal ornaments on Smash Into You, but the group behind her just sounds lethargic. Slower songs — like Say Something — are funereal in pace, heightening every mismatch in the soloist(s) and harmony line.

Not every song is a snooze; Bedroom Hymns and Cheating have some movement thanks to shorter, pulsing notes. The songs still need some major dynamics to save themselves from monotony, but at least there's a little momentum in a few arrangements here. Album-closing Exogenesis: Symphony, Part III (Redemption) has beautifully layered extended notes, with soloist Hayden Kline sounding absolutely gutted overtop. It's the one moment on 120 where OOTB's choice of extended notes really works — but by the time the album is wrapping up, it's a little too late for most listeners.

Even though the leads here are an improvement from OOTB of the past, the group still has work to do to make these songs compelling performances overall. Solo-wise, Jackie Ferro has a beautifully tender lead on Sunrise, and Sonali Chauhan is completely passionate and committed to Chasing Twisters — the only song here where the backing voices come close to matching the soloist's energy.

I wish I could recommend 120 on the strength of the soloists alone, but the leads aren't strong enough to balance out the weakness of the group's performance as a whole. In order to have an album that's compelling for listeners, Out of the Blue will need to channel real movement and storytelling into its songs.

120, the latest album from Yale's Out of the Blue, is by no means a pick-me-up. If you're looking for a bunch of upbeat head-boppers for your next dance party, this is not the album for you. 120 is darker, moody, and (as far as I can tell) a story. Track after track, the group takes you on a journey; one full of angst and heartbreak that ends on what might be a hopeful note.

The opener, Sunrise, really sets the theme for the album with a beautiful, haunting take on the Norah Jones hit. As the album progresses, I can see two people meeting and falling in love, then conflict, desire, betrayal, the fallout and confusion of lives falling apart from each other. The album ends on Human and Muse's Exogenesis: Redemption, leaving us to believe that there might be a way forward despite the chaotic path we've covered.

I really enjoyed the cohesiveness of the album. Musical director Hayden Kline provides a number of my favorite arrangements, finding new takes on Sunrise and Bad Moon Rising to make them fit the feel and flow of 120. It's a welcome change from the yearbook albums we typically see from college groups to something that feels very thematically crafted. There are places where the intensity is somewhat lacking, or where the background syllables are less effective emotionally, although they might get the job done rhythmically. That emotional component is so crucial, though, given the narrative of the album.

Overall, whether I'm reading a more intentional storyline to the album than was intended or not, Out of the Blue should be incredibly proud of its work on 120. I highly recommend picking up a copy and considering the larger picture that these songs paint. Technically, there are some areas that could be tightened up, but it's always nice to see albums being pushed into different areas, and I'm interested to see what the group does next.

This album is available for download on iTunes and streaming on Spotify.