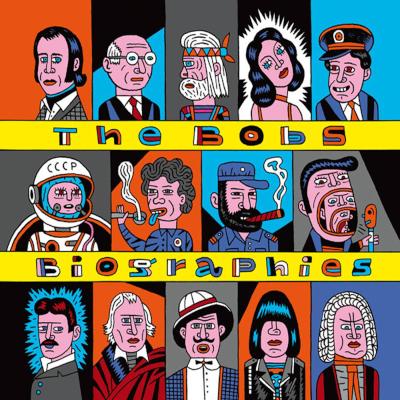 The Bobs fusion of jazz and comedy still thrills. The comedy is more subtle now, more conceptual — or maybe it's always been this conceptual and I'm just more in tune with the jokes? I'm certainly more in tune with the jazz. It's always been there, yet with the current lineup and modern day production it's floated to the forefront. The Bobs have grown into their vocal quirks and embraced the studio in a way that makes this new album more of a complete recording, and less of a conceptual piece and/or concert memento.

I hesitate to say The Bobs are less of anything. I hesitate to even say jokes and comedy, but I couldn't come up with better words so I'm sticking with what I know. I feel like I understand what they're trying to do better than I ever did 20 years ago, and also that this understanding has come at the expense of words to describe it. So bear with me.

This new album falls neatly into that old critic's cliche: it does not disappoint. If you buy one after a concert, you'll like it. If your friend gives you one randomly you'll probably still like it. And best of all, if you've known the group for years you'll be happy too, basking in the old wit and plenty of new ideas. The old favorites are dusted off with care and finesse, transformed into jazz numbers that overlay the comedy roots. Meanwhile the songs have a good mix of live sound, multitracking, and use of percussion, so that the group sounds cohesive but not always the same.

In other news, ladies and gentlemen, Elwood Decker is still dead. I'd always thought of him as sort of a comic figure, a low-profile Generalissimo Francisco Franco in my record collection. Turns out he was a famous artist and he was on the tracks by himself because his wife had died earlier, according to Wikipedia anyway. I feel bad for not looking this up earlier; I've always liked this song. If you want to know about the other famous people memorialized in song, The Bobs' Kickstarter page has some nice pictures.

Tesla, Tesla, 1 2 3 is my favorite track for sheer musicailty. I love Andy Always Dreamed of Wrestling, this time with trombone instead of ring noise. The current lineup of Bobs have a nack for staying true to their classic '80s edgy blend, but slightly softer and with a stronger groove. Much credit goes to Angie and Dan for fitting so well into the Janie-Joe slots while staying themselves. Also Richard and Matthew for keeping the dream alive and staying creative to make the most of the available sounds.

Valentina Tereshkova sounds the most like the old Bobs, just voices and a female-led melody that gets closest to the old blend, along with Clarence Birdseye Flash Frozen Food, which is every bit the superhero anthem you'd want it to be. Fidel's Fashion Manifesto is just weird, and The Nazz sounds like it's been there all along, which I adore. On the classical side, Lorenzo da Ponte picks up where the barbershoppers left off with Eine Kleine NOT Musik. It's nice that The Bobs chose a mix of men and women and tell their stories from multiple perspectives, aided by the range of music on offer.

Bach to Bach is a poignant duet, set to one of the most romantic melodies in musical history. It tells the story of a married couple struggling to connect over too many bills, too many kids and many, many years. Its hopeful resolution bodes well for The Bobs and for us, too.

The Bobs have been releasing albums since 1983. That's 30 years of often funny and always thought-provoking a cappella goodness. To celebrate their Pearl anniversary, The Bobs have released a pearl of their own. Biographies is educational, nostalgic, and as funny as ever.

I'll admit, when I scanned through the album, playing thirty-second clips to start, I was prepared to dislike it. Not being terribly up-to-date in pop culture or having a firm grasp on historical figures, I dreaded having to research nearly every song to make heads or tails of them. But, after sitting down and playing the album straight through, I found that I was not only able to follow everything, but that it piqued my interest and made me want to do research and learn more. The whole while, I was treated to classic Bobs humor and wordplay.

The Bobs are not known for using studio tricks to power-buff their albums. Biographies is no exception. It's raw, but clean. Nostalgia is a big part of this album. There are tracks about people we remember fondly such as The Nazz, a jazzy, beatnik tune about Jesus Christ; Valentina Tereshkova, the first woman in space; and Tesla, Tesla, 1 2 3, about Thomas Edison's friend and rival. There are also beloved classics previously released by the group, such as Elwood Decker and Bach To Bach. Shut Up and Sing, the title track of their 1993 release, is re-worked and has The Bobs poking fun at themselves for talking too much on stage.

A few tracks don't shine quite as brightly for me. Fidel's Fashion Manifesto, Julia's Too Tall, and Johnny Ramone don't resonate with me musically. A few phrases sound choppy, as if the melody was set and the lyrics had to be forced in, whether they fit or not. On the other hand, Lorenzo da Ponte is brilliantly conceived.

To all the Bobs fans out there, I absolutely recommend this album. To those who've never heard The Bobs before, this is a great album to start with as it will completely immerse you into their musical sensibilities and quirky, intelligent outlook. Biographies is a wonderful combination of Schoolhouse Rock and Dr. Demento with that a cappella flavor we crave so much from this 32-year-old band.

I'll be honest: I had no idea what I was in for before listening to Biographies, and while the quirky, unique album art should have been an indicator of the kinds of odd sounds awaiting, I still overlooked it all as a mere gimmick. What I found, however, was an album of fun, jazzy, comedic, yet oddly "educational" tunes. Building the album's concept around historic figures like Bach, Valentina Tereshkova, and Fidel Castro, the Bobs create a work that, like the title suggests, tells satirical biographies that simultaneously parody classic modern pop hits.

I really appreciate the way The Bobs break the standard a cappella form, creatively "covering" classic hits like Queen's Flash for example while successfully poking fun at Clarence Birdseye, inventor of frozen food. (Who knew?) Choosing "yum" as the syllable for the bass line is another nice, cheesy comedic touch.

The Bobs might have committed a cappella's cardinal sin with the inclusion of trombones and pots and pans as instruments in Hedy Lamarr Spreads It Around and Julia's Too Tall, but there's no denying their subtle touches add much texture and color to the tracks without detracting from the overall vocal feel of the songs.

If you're looking for something off the beaten path in a cappella, I highly recommend giving Biographies a listen. Not only will you crack a smile listening to some of these witty lyrics, but you might even learn a thing or two.

This album is available at CDBaby, iTunes, and Bandcamp.