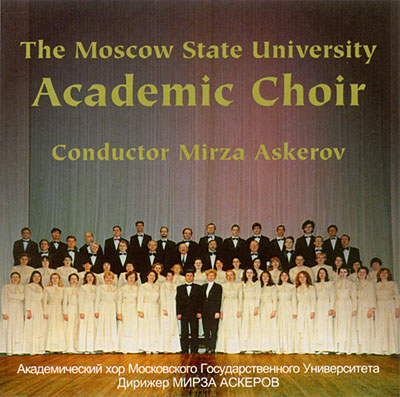 This CD is just like every other CD by every other co-ed collegiate a cappella group. It's a collection of mostly classic cuts with a few folksier tunes thrown in to help keep them honest. Except instead of classic rock songs, these classics are actually classical. And instead of folk rock, they sing actual traditional folk songs. And instead of having 16 or so voices, they've got over 60 members. And they're Russian. Other than that, it's just more of the same.

The Moscow State University Academic Choir is clearly a force to be reckoned with, but their CD isn't necessarily the best introduction to the genre for novices to the classical world (like myself). The first ten selections are very grabbing and tend to float by without ever making you want to stand up and cheer after each song. Fortunately, the album picks up and gets better as it progresses.

The albums highlights include Shchedrik (it's the "Hark, how the bells" Xmas song), and Prisoner, a beautiful song where the mighty bass section slowly pushes its way up to the front of the front of the arrangement. Throughout the album, the basses do a nice job delivering the rich tones you'd expect out of a Russian choir.

Some of the best material is on the last section of the CD, which is dedicated to Russian folk songs. I particularly enjoyed the spirited Brightly Shines the Moon, which trots along at a pace brisk to make it easy for you imagine regular folks singing it at a pub once upon a time. The hands down winner is Brooms, which hits the ground running and just keeps building until it triumphantly bursts past the finish line.

Despite the dramatic differences between The Moscow State University Academic Choir and the average collegiate a cappella group, the two could learn a lot from each other. This CD could teach far too many collegiate groups the importance dynamics. It could also prove, once and for all, that just because you choose to do a choral arrangement doesn't mean you can't still feature a lead vocalist. (The Academic Choir features soloists on some tracks, which helps keep the disc from becoming too monotonous.) The Academic Choir, on the other hand, could learn a thing or two about production from the average collegiate group. Their CD sounds too much like the typical recording of a choir singing with a symphony: the singers sound distant. You feel like you're watching them in concert from the front row of the first balcony. The blend of the singers is pitch perfect. They deserve a more intimate recording.

I have to admit that when I got this album in the mail, I took one look at the track list and gagged. Twenty-four choral tracks, all in Russian. I looked at the cover, and saw forty impassive, unsmiling faces staring back at me. I imagined sitting through sixty-eight minutes of dark, heavy, unintelligible music, with lots of screaming sopranos and very deep basses. Pass the vodka, please.

Well, so much for my pre-conceived notions.

These folks know a thing or two about the subtleties of dynamics. And phrasing. And blend. And, I assume, diction, though they could have been singing "All work and no play makes Jack a dull boy" over and over, and I would have no clue. But like they say, the spirit of music often shines through, if not the exact meaning. Many of the performances on this CD are of that caliber.

You will, I'm sure, recognize the tune from track thirteen - Shchedrik — better known to folks like myself as Carol of the Bells. It was a nice anchor of familiarity in a sea of music that was completely new to me. But, again, though the tune was familiar, and it was the same arrangement that I've sung a bazillion times, I was still left wondering if they were just singing about cabbage or something. Good thing they put the song titles in English, or I'd be trying to spell Shchedrik in Cyrillic letters.

OK, so there is an occasional screaming soprano, and said sopranos occasionally land just south of the pitch center, particularly on the heavy belting sections. But, that only happens on the earlier tracks, which are from roughly the same period, 19th century romantic, which seems all about big, loud cadences and all sorts of drama and angst. But then they get into the more contemporary repertoire, and they just shimmer. The whole choir sings with a remarkable unity, which must only come from a great understanding of each piece. Some of the tracks are performed so well you would swear that the composer was conducting. So, here's to director Mirza Askerov.

The Moscow State University Academic Choir, which is older than the entire United States of America by one year, has truly blessed the public with a wonderfully rich collection of choral works and Russian folk songs. As it is completely in Russian, there is no translation to work with in matching ebb and flow with word and meaning. However, just to sit back and enjoy choral works with such rich and sustained mastery is a joy.

The production of the CD is near-flawless, with the inclusions of the wonderful solos taking spotlight where appropriate. The individual voice sections can be heard clearly and distinctly when you try to pick them out, but as you let the colors of the music wash over you, the blend is so seamless you can't help but marvel at it all. Especially incredible is the longest track, I Lift Up My Eyes, an eight-minute piece that maintains the power of the music even late into the track, when other groups may lose their stamina. It is a piece that has to be heard to understand.

There were two tracks that I recognized if only because of the melodies...Track #13 is the Ukrainian folk song Shcedrik which Christmas carollers will immediately recognize ("Hark, how the bells..."), and then the last track of Gaudeamus Igitur. Recognition of either of these tracks didn't help the recording over all...it just made me feel better with the knowledge that my own understanding of music isn't as introverted as I used to think.

If there is anything to complain about with regards to the CD, it is in the notes...I wish there had been a little more about the history of the tracks or the composers, as they are all Russian. Tchaikovsky and Rakmaninov are the only Russian composers that I was familiar with, but I would have liked to known more about Bortnyansky, Balakriev and the other composers whose works were featured. As it stands, there is a brief history of the choir and their director, providing a good sense of their breeding.

If you appreciate ANY choral music whatsoever, then you definitely need to purchase this CD. It is a wonderful collection.

Russian choral music is not something I listen to often, I confess. Its not on my list of must-haves. It really fits in a niche. If you need that niche filled, than perhaps this album is for you.

The Lomonosov Moscow State University Academic Choir has been around for quite a long time, starting as far back as 1775! So it has quite a history behind it to say the least. It has traveled all over Europe and apparently has quite a reputation as an outstanding chorus. From what I can tell, this recording is proof positive of their quality and ability. The singing is excellent and well balanced, as the choir sings music written by Russian composers (including Rakhmaninov and Tchaikovsky) as well as short collection of Russian folk songs. One song in particular (Blessed Is He Who Smiles) was written and dedicated to the Choir by Tchaikovsky himself. The repertoire on this album is balanced between quiet songs that show off the choir's control, and more upbeat songs that show their power. Did you know that Carol The Bells is originally a Ukrainian folk song? I did not know that, but it is here on the album performed in Russian, and with grace.

This recording was printed for release in the USA by our friends at Mainely A Cappella. So if you happen to look for niche-filling music such as large Russian choral music, this album is for you! It wasn't for me, but it might be for you. Enjoy.

Ah, good choral music! Like it? Buy the disc, and give thanks to the good folks at Mainely A Cappella for helping this album make it to the states. Not your bag? Move on. No genre surprises here.

Russian artists have a reputation for doing great things with the classics. Orchestras, ballet, opera — some of the best has come out of that land, with a technique and artistry that has equaled or exceeded the rest of the Western world. The Moscow State University Choir applies the same standard to choral music.

Composers from Russia dominate the disc, which is entirely without instrumental accompaniment. The music is rich and expressive for its genre. Some tracks, such as Bortnyansky's It is Truly Fitting show a liturgical sound, with Byzantine chords and rumbling bass lines. Others, like G. Sviridov's Spring Song display the full extent of the choir's dynamic range, which is as impressive in its quiet moments as in its fortissimos.

A selection of Russian folk songs round out the disc, along with Tchaikovsky's Blessed is He Who Smiles. The latter is apparently the choir's signature tune, and was dedicated to the choir by the composer himself.

It probably bears saying that the Moscow State University Academic Choir is not a college group as American sensibilities might interpret it. This is no glee club from Idaho — rather, it is an assembly of expert classical musicians who have come together to practice some of the higher forms of their discipline. It is a true class act.