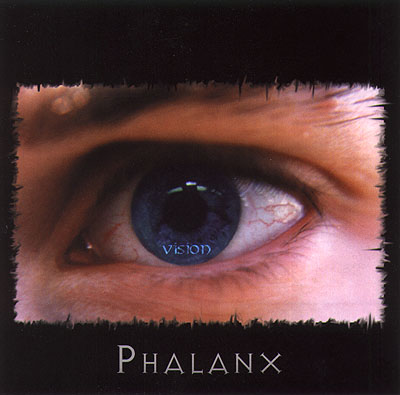 Phalanx' Vision has quite the dramatic CD cover. Phalanx, What a great name, I thought. "Vision", I like that as an a cappella album title, interesting irony. I ripped into the CD eagerly awaiting a new sound in a cappella. No such luck. This is the late '80s collegiate formula done without material variation. Same old same old.

Perhaps Phalanx' members have lots of personal charisma. Perhaps that charisma earns them fans who will be grateful for this memento. However, if you haven't already been hooked, this CD definitely won't be the ticket. Phalanx is a striking name, but the sound has all been done before and better by many other groups.

The Bad and Ugly: The mixing is frustrating. The listener is treated to lots of middle background parts. Leads are too far back and bass and VP frequently have little mix attention. Intonation is a constant challenge for this group. Musicality comes and goes throughout the songs. There are moments of beauty, but there are some pretty ugly moments too.

Dancing Queen is literally painful to listen to. Sure, it's a fun song, and possibly a great showcase for a high tenor, but not really such a good showcase for a mid-range tenor. I Believe has a believable lead, but the arrangement in addition to being out of tune is in its own musical world and fights rather than supports the song.

The Good: Just when I'm itching for the fast forward button, With or Without You starts. Intonation, balance, musicality ... all drastically improved. Compared to the other tracks, this one shines. But compared to the recordings out there, this track still falls into the average category. I Can See Clearly Now and Send Me On My Way bring us the other strongest leads on the album.

Overall, this is a CD for friends and family and perhaps for the very forgiving listeners who have already become fans of Phalanx. For everyone else, "vision" is perhaps the best sense with which to appreciate this CD.

Phalanx's liner notes claims that the group, "has become one of the most established groups on campus, and has secured a place for themselves in the upper echelon of college a cappella".

Um. Could someone then explain why I've never heard of them before? See, the only problem with making claims like that on your album is, what happens if the product doesn't live up to the hype? Giving Phalanx the benefit of doubt, I checked out their web site to learn more about who they are. What I discovered there was that Phalanx's primary arranger and musical director, Jonathan Sears, was recently nominated for a CARA for Best Arranger, and that, contrary to my assumptions, this is not their first album.

So, setting aside my personal issues with their presentation, I forced myself to take a good, honest listen to their album, Vision, which features songs that range from the traditional (Good Ol' A Cappella) to doo-wop (Brown-Eyed Girl, Takin' Care of Business) and sort-of-contemporary (With or Without You). It is my honest and unbiased opinion as a RARB reviewer that this album is really fabulous.....were it 1991.

Nowadays, however, college a cappella has graduated to a higher standard, and the weak lead vocals, cheesy arrangements, and poor intonation on Vision just don't cut it. I can't even begin to count how many times I caught myself cringing while listening to this album because the soloists (with the exception of Joe Anzuena) would warble and scoop (without finishing on the right note). And however unfair it is to judge a song on the basis of its lead vocal, they really did ruin the experience of this album for me. I wish that someone would convince Phalanx to transpose their arrangements to suit the singers — too many of them were obviously too high for their leads. (Note: just because you can hit a note doesn't mean that you should.) On a positive note, I can see why an Elizabethtown audience would enjoy a Phalanx concert — they sing with energy and an earnestness that is commendable. They have chosen a good mix of songs that are both catchy and upbeat. Joe Anzuena & With or Without You is fantastic. And I'm not being sarcastic. It's a great track. The bass, percussion, and top parts all mesh together in a wonderful treatment of this U2 classic. However, even these redeeming qualities are not enough to save this album.

I'm sorry to keep on nitpicking this point, but damnit, the liner notes do not give credit to the original songwriters and lyricists of the songs covered, only to the arranger and soloist. Please people, it's the least you can do.

My suggestion to Phalanx: work as hard on all your songs as you did on With or Without You, then you'll have a product that is truly representative of the "upper echelon of college a cappella".

This is a classic collegiate all male a cappella album. In some ways, that's a good thing. In other ways, it's not so good.

The soloist are decent on their respective songs. None really stood out as especially spectacular, but none were completely awful. They all had the right voice range and quality for each song. The back up voice (or second solo) were also right on the button as far as range and quality.

You can also hear how fun this group is with their rendition of Dancing Queen. The inventive opening followed by the most energetic song on the album was done very well.

Unfortunately, that was the only really creative song here. The rest just seemed to sound like the same thing over and over again. Same syllables, same blend, same everything. So many of these songs have been done before by other a cappella groups on other albums that you have to do something unique with them or they become stale. There's nothing different or exciting here.

There are also some pitch problems that come with young groups that don't know how to really use the studio. And when you record a song with snapping, make sure everyone is snapping at the same time. There's nothing more distracting than that snap that came just a little too late.

By listening to this album, I can tell that this is a relatively young group. By that token, it should be taken by the continuing group as a learning opportunity, something to improve on, while taking away some of the good from it (plus, the money made on this will help with more and better studio time). As for right now, though, I'd say go see this group live. Then decide if you want the album to remember them by.

Listening to this album reminded me somewhat of the National Championship of Collegiate A Cappella, where all the groups are asked to sing a "showcase" song while the scores are compiled. Often a group will step up and wow the crowd with some explosive, hilarious, completely memorable tune, and I'll sit there thinking "why didn't they do this as part of their competing set?"

Similar thoughts were bouncing through my mind as songs like Lightning Crashes and the inspired Send Me On My Way closed out an otherwise conventional album littered with warhorses like Good Ol' A Cappella and Build Me Up Buttercup. Similarly, flashes of brilliance (the do-re-mi break in Brown-Eyed Girl, for instance), failed to liven up more than a few otherwise straightforward arrangements.

There is nothing really that wrong with Phalanx's Vision. In fact, this album showcases a respectable men's a cappella group with some huge potential. But Vision teased me, it strung me along, it said "look what we can do" and then didn't do it. It's really two albums disguised as one. On the one side we have "doo-doo" syllables and the like, on the other we have cutting-edge work clearly modeled on some of the best men's groups out there (arrangements by the Trenchcoats and the Middlebury Dissipated Eight are featured).

Phalanx has solid voices, good direction, and some top-notch soloists. The studio work strikes a nice balance, with thoughtful use of effects highlighting a rich, live sound that makes the album very listenable. In summary, I would recommend this album. At the same time I would encourage Phalanx to take more risks, expand, and make every number as good as that proverbial end-of-show closer.

I was a tad disappointed in Phalanx's latest creation: Vision. Phalanx live is not crapapella (I saw them this past October), so I'm going to assume production as Vision's problem.

The cover art was appropriate, but I want more in the liner notes. There is no mention of original artist, songwriter or publisher, yet a copyright symbol is placed after the each song title. No credit was given to an engineer, a studio, a producer, or a graphic artist. I like to put faces to the names, so I was bothered when none of the group pictures had captions. On to the music.

The high energy, tight blend, and emotional impact of Phalanx live was lost in Vision. There were tempo issues, and surprisingly, the majority of the pitch problems on this album can be attributed to the soloists (several attempting solos out of their ranges).

The mixing was rather harsh, with the bass line too high in most songs. Effects were used seemingly at random and contributed to the unbalanced feel of Vision.

The track selection varied from creative, to AGAIN? Good Ol' A Cappella especially stood out. Send Me on My Way was my favorite track. It was there I felt the energy of the group, it also had the best dynamics. Again though, there were pitch problems in the soloist. Several other songs (I'll Be and With or Without You) allowed me to glimpse the potential of this group. I Believe was interesting and brave coming from a group made up entirely of Caucasians: "He'll see me as a person, and not just a black man."

I was very impressed with Jonathan Sears' arranging ability. Out of 12 songs, seven were his. He put an interesting twist on the overdone Brown-Eyed Girl and has received a well-deserved CARA 2000 nomination. HOWEVER, I don't see any reason for a group in its sixth year to borrow arrangements from other groups (I Can See Clearly Now and Send Me on My Way).

I would pass on this album. There are too many better male collegiate recordings out there. It was a good effort, and I hope their next album corrects the mistakes of this one.