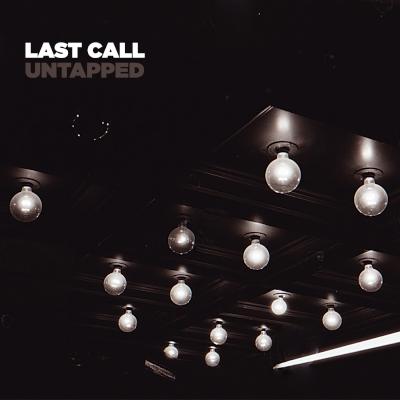 Hey, it's Last Call, everybody. Time to find those beer goggles and make your final plans for the night. Remember to pay your tab and tip the staff. Have a good night. You don't have to go home, but you have to get the hell out of here.

And that's what it feels like while listening to the latest release by Last Call of Cornell University. Untapped starts off with wild anticipation as to what will happen within the next 30 to 45 minutes, but mixes in some anxiety that something isn't going to go quite right. It feels a bit hazy and meandering at times from earlier shenanigans. And while not completely satisfying by the end, at least you know you got your money's worth.

And the two tracks that are worth the money are: Can't Hold Us and Brake Lights.

Can't Hold Us is rambunctious. It's everything that a cappella hip-hop should be — rhythmic and pulsating, with a strong bit of bravado. I listened to it on repeat much to the chagrin of no one ever. It's nigh on perfect and I don't use that lightly. Yet, much to the detriment of the group, the song set up expectations that the rest of the album simply could not live up to.

Brake Lights is wonderful. If you don't look at the liner notes, you'd never know this wasn't a pop hit currently playing on the radio, Pandora, or Spotify. It's that good, and it's original. Evocative without being schmaltzy. Stylistically, it reminds me of On The Rocks' Afloat and Lighthouse off of their album A Fifth. This is an earworm for the masses.

Almost everything else leaves you with a "meh". None of it is bad, save for the unneeded inclusion of Bad Romance, but nothing else really has a remarkable stamp on it either. The guys sing well, and the soloists really try to dig into the material that they are given. Some of the other songs are fun, but the production doesn't push them far enough. I really enjoyed Kill of the Night on first listen, but by the time I got into critic mode I just wanted more. And Gravity has the unfortunate position of following the aforementioned Bad Romance so it took a lot just for it to get back into good standing.

Well, that's not completely true. Gravity really could have been a "5" as the soloist kicks it up a notch through most of the song, and it really starts cooking when the basses drop it into the pocket and the vp kicks in at the second verse. My heart stopped for a brief moment ... but that climatic note on "down" that we all know simply wasn't supported properly and didn't have the cathartic release that it has to have to be transcendent. I almost bit through my tongue from the hurt of the missed opportunity. I had to go listen to UCLA Awaken's original and Sara's album versions to get my soul back together.

Last Call keeps putting out good albums — just not great ones. But they seem to be on an upward trajectory. They are a really solid group, and there's no reason not to listen to them because there is truly some Untapped potential here.

Consistent but not very engaging, Untapped took a two-leader approach and sounds a lot like what you've already heard in the all-male genre.

All of the songs here were arranged by group member Nolan Jones (with some assistance), and all of the vocal percussion was performed by Eli Grossman (with some assistance), and that's really evident. Because on the plus side, it all nicely stitches itself together with the same fabric, but on the minus side, the fabric is a standard white cotton blend. Nothing super show-stopping. Nothing "You've got to hear this." Except for a few sparkly soloists, it just rolls along through the hits with a sameness in approach and delivery.

Here's one note I wrote frequently for Untapped: "This is the same drum pattern for too much of the song." In an album of similar tempos and vibes, creativity in the drum can go a long way toward creating distinct pieces, but there just isn't a lot of rhythmic work here to get excited about. For example, Jones' original ballad Brake Lights probably makes all the girls scream and flap their hands hysterically when he croons it live because there's a great foundation, but with the relentless rarely-changing recorded percussion, it loses most of its fresh-in-the-moment power.

Jones and Grossman are perfectly capable at their crafts, but with twenty-four Last Call group members listed in the liners, I'm sure I'm not the only listener wondering what else could have been poured for Untapped. The group's last submission Flair definitely offered us a lot more to get pumped about.

The boys of Last Call certainly know how to impress. Particularly, they have a great sense of originality you might not see often in all-male collegiate a cappella: look for it in their unique song selection (including one entirely original song — but we'll come back to that), their innovative arrangements, and their savvy marketing sense displayed by their impressive CD packaging. It isn't often I can find everything I need to know about a group from its liner notes, but perhaps I should expect that level of awareness from a group of 21 years.

Let's talk about the product itself: it's fantastic. The love of what Last Call does comes across plainly in each song, an energy that separates Untapped from just another technically sound album. At no point in listening to this album did I find myself distracted by lacklaster effort or disinterested background parts. This great result comes back to Nolan Jones, the music director and arranger of all songs (though the liner notes do credit other members with assistance on certain songs). His creative imagining of Save the World and Kill of the Night are standouts, but I want to make specific mention of his exceptional originality on Bad Romance; taking Gaga pop standards and transforming them into something wholly unique is an uncommon skill. As such, the song I had feared most on this album turned out to be one of the best, aided in no small way by the dedication of soloist Chris Lundquist to the revised product.

The gem of the lot is, of course, Nolan's phenominal work on his own original piece, Brake Lights. I rechecked the casing four times to make sure I was listening to an original piece and not the next big Daughtry hit. I can't think of many original a cappella songs with that much power since Sara Barellies debuted Gravity on Dysfunktional Family Album.

The tuning and musicality on Untapped is exceptional. The micro-dynamics are natural, and the percussionist is as on point as every soloist (David Minicucci in particular deserves recognition for his expectional solo on Kill of the Night). Last Call sings every song with purpose and the result is wonderful.

So, what are the flaws? There's a little too much unneccessary production. The trumpets in Can't Hold Us sound synthesized rather than like a voice part, the bass gets lost to electronics occasionally, and vowels and syllables get blurred into indistinguishable noise on several songs. However, such occurences are few and far between, so it hardly detracts from the product as a whole.

The combination of good intention, originality, and quality makes Last Call one of the best recent collegiate releases I've come across. If you're a die hard all-male a cappella fan, it is most certainly worth a listen ... or twenty.

Untapped is available for purchase on CD Baby and iTunes. Visit www.MenOfLastCall.com for more information.