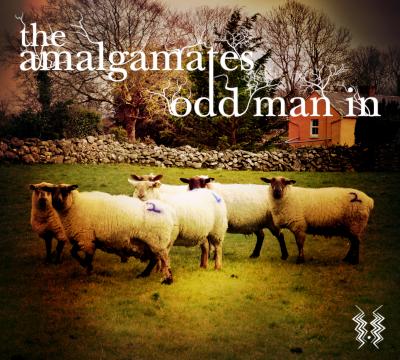 Odd Man In is shiny! Every track feels sparkly and Top 40, and even the deviations feel like overlays rather than style shifts. If you want to bounce around to a cappella radio pop, this is a good album for you.

Folkie that I am, I quite like Brothers In Arms, with its singer-songwriter solo floating over the wall of sound. The processed, tuned-up background makes sure it fits with the rest of the release, while also offering a mid-tempo break from the dance beat. (A very effective dance beat, by the way.) Every Teardrop Is a Waterfall seems like the perfect song for a night road trip, while Cosmic Love offers a great solo and a powerful arc that builds up into the chorus.

The Amalgamates have a fondness for the jin-joh-doh that sometimes distracts. I thought the group particularly overdid it on Go Your Own Way, which also has an odd Amy Winehouse aura on some of the lead lines. I also don't connect with Follow Me Back Into the Sun or Undisclosed Desires, which feel milder and less fully-realized than the rest of the disc.

A grungy Cold War and Maroon Five-like Don't Gotta Work It Out give respectable showings, and overall the Amalgamates seem to be pushing forward at all times. I enjoy their confidence and obvious drive. Maybe you will, too.

The Amalgamates have done it again with Odd Man In: this group has delivered an album that is compelling, heartfelt, and full of dynamic energy.

Much of what I wrote about the group's 2011 album Hands Off the Mannequin! still stands: the group is wholly invested in every song here; every singer from the soloist down to the bassline (and vp) is engaged; and the group as a whole sings as if it's one voice in terms of blend, energy, and tone. The recording/production is great — kudos to the guys at Plaid Productions for the recording, mixing, editing, and production (a wise choice since Plaid's Alex Green is an alum of the Amalgamates and is likely quite aligned with what the group is trying to go for here). This album just sounds great: slick where it needs to be but not over-produced.

The album kicks off with energy on the sultry Paris (Ooh La La) (seriously, how many albums can start off convincingly with a grunt?!), but it's the later songs that are even more impressive. There are some gorgeous dynamics on Undisclosed Desires, both in the song overall and on each and every phrase. The arrangement for Grounds For Divorce is fantastic; kudos to 'Mate Allie Katz for that — Elbow will certainly be winning some new fans because of this version of the song. Brothers In Arms, Cold War, and Cosmic Love are all beautifully delivered: you've heard versions of the latter two before, but the 'Mates do them more compellingly than most.

Odd Man In, like its predecessor, isn't perfect. A few of these songs are a little repetitive (Don't Gotta Work It Out, Every Teardrop Is a Waterfall, Follow Me Back Into the Sun). I also wish the 'Mates had been a little more creative across the board both with song choice (there are still a handful of overdone choices like Cold War and Cosmic Love) and with arrangements (the group's version of Dire Straits' Brothers In Arms is stunning, but it's based on Club for Five's cover — and thankfully, the 'Mates give credit to both groups).

Still, Odd Man In is an exceedingly impressive album from a routinely strong group. I was actually disappointed that the album ended after only ten tracks. It's rare that any group leaves me wanting more so acutely.

From the opening grunt and grinding, squealing, pop baubles in Paris (Ooh La La), the Tufts Amalgamates have my attention. The rest of Odd Man In, the latest from the accomplished mixed group, does not disappoint. These ten tracks offer sass, energy, nuance, and a bevy of emotions without ever going overboard. This is an album with a well-conceived dynamic (music and otherwise), a perfect length which doesn't overstay its welcome, and an identifiable personality.

As recorded a cappella music becomes increasingly controlled and decreasingly live-sounding, one of the most common mistakes is when groups try to rely on their performance arrangements for the recorded product. Happily, the Amalgamates avoid this trap here, with arrangements which are far more like rock and pop charts with voices divided into instrumental parts. These parts are then enhanced with the requisite buzz, fuzz, and atmosphere by the abundantly capable folks at Plaid Productions. The music doesn't sound live, but it does sound alive, a particularly difficult task when recording a cappella. What makes this album so great, though, is not just the instrumental textures, but the realization that this approach cannot be absolute. In songs like Every Teardrop Is a Waterfall and Grounds For Divorce, the charts offer synths, drums, and guitars, but also the same vocal tricks and techniques (like bell tones and effective transitions on syllables) which have hooked so many over the years on a cappella covers of pop songs which were otherwise perfectly fine.

Though the male soloists are eminently capable on this album, it is the ladies who really shine. On Paris, Gabrielle Bills more or less sashays through the song, her voice oozing through the speakers. While Jenna Bjorkman can wail on Cold War, it is her moments of restraint that are most impressive. The same holds true for Bills again in Cosmic Love. I also can't overlook Dan Kim for his understated power in Undisclosed Desires.

There may still be "purists" out there who object to the heavily processed and instrumental approach with the drums and bass (among other instruments on Odd Man In), but that is an objection to the continual changing of an art form. With a simple change of perspective, those listeners would hear how the Amalgamates are illustrating the benefits to this sea change, and give it perhaps the best there is to offer.

Inquiries about ordering albums can be directed to Tammara.Gary@tufts.edu