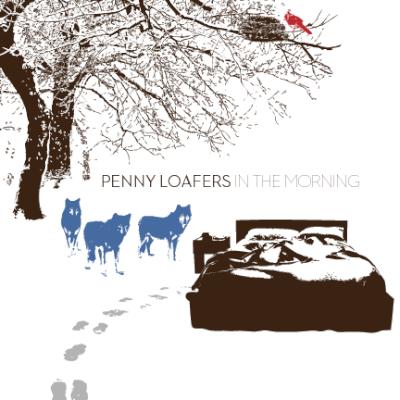 The Penny Loafers from the University of Pennsylvania have a letter to listeners in the liner notes of the group's latest album, In the Morning. The group talks about its recording hiatus (no one on In the Morning has appeared on a Penny Loafers CD before), its indie track list, and its choice not to use effects on every track.

It's an interesting point of view, but the CD itself doesn't back up the group's claims. Indie track list? The album is full of songs from major-label, top-40 artists such as Paramore, Ellie Goulding, Gavin DeGraw, Demi Lovato, and Florence + the Machine. A brand new group of Loafers in the recording studio? Sure, but it's not a fresh perspective: they make the same old mistakes that the Loafers of yesteryear did.

My biggest complaint with In the Morning is the same issue I had with the Loafers' last album, 2010's The Cops Come at Midnight: I want these singers to give me more — more dynamics, more passion, more life. Monster needs more bite; The Cave and It's About Time both need more dynamics, especially on their final climactic crescendos; Wolf & I is so repetitive that its haunting tone loses its impact.

Yet there are plenty of details that the Loafers do get right: Monster has some flawless transitions between verse and chorus, and the arrangement/backs at the beginning of Lights flutters in a beautiful way. And sometimes such solid details coalesce into moments of greatness: Skyscraper is a gorgeous performance, from soloist Teri Wilson to the arrangement written by Brette Trost and the delicate backs with their lovely phrasing. Trost strikes gold again in collaboration with Sean Naylor on the arrangement for Jungle which takes the listener on a compelling journey. And Adolescents has the dynamic range I hoped for on the rest of the album.

Overall, I appreciate that the Penny Loafers took the time to communicate the album's vision and a bit of a mission statement in the group's letter; I just wish that the album had been more consistent with that message. These singers do achieve some beautiful and memorable moments on In the Morning; I hope that their next endeavor can harness more of those strike-gold moments.

Following the success of The Cops Come at Midnight and Prophets & Pawns, In the Morning is easily the most solid album that the Penny Loafers have released that I've heard to date. The group, their alumni, and Studio Crash should all be proud of the work they've put into this album. The arrangements (mostly written by Sean Naylor, Brette Trost, and Mike Yung) are fresh while remaing true to the original songs, and they've been lightly brushed with studio enhancements to give the listener more of what the Penny Loafers have to offer. But even with these cascading chords, multi-layered arrangements, and confident soloists, this is an album that every a cappella enthusiast has heard before.

One of the things that immediately caught my attention on this album was the soloists. They are confident and nuanced, supporting and enhancing every aspect of the arrangements. On top of that, every single track has a different soloist, something that many collegiate a cappella groups could never manage. Studio Crash has layered some effects on the backs in tracks like Monster and Adolescents, providing some color but not distracting from the naturally vocal quality of the arrangements. The tracklist largely stays away from the more overplayed songs from the past several years and brings fresh and exciting takes to lesser-arranged songs like Bird Song and Tallulah. Unfortunately, some overplayed songs like The Cave, Wolf & I, Not Over You, and Lights have made their way onto In the Morning, leaving the overall album to suffer in comparison.

The mainstream genre of indie pop seems to reign supreme on In the Morning, the latest from UPenn's Penny Loafers. The track list includes covers of Bon Iver, Flo, Ellie Goulding, Incubus, Mumford & Sons (surprise!), and even some Demi Lovato (neat). I was able to appreciate how well In the Morning plays start to finish and didn't find myself having to skip around. This speaks to the Loafers' ability to carefully select tracks that complement each other as opposed to the typical "mixed bag" of Top 40 hits that often gets produced.

Vocally speaking, the Loafers seem readily stacked with great soloists who are unafraid to take ownership of the songs, the most noteworthy of the lot being the performances on Bird Song, Elephant, Adolescents, and The Wolves (Act I & II).

Overall, I find the Loafers' group vocals mostly on point. The execution of the independent rhythms and moving parts on songs to create textures, such as those on Lights and Jungle, is great. I don't always care for the Loafers' choice of enunciation and use of syllables, though. The "jzho-jzhanno"s and the "jeng-jeng"s don't always meld with the rest of the music and are just plain distracting and noisy-sounding at times. A good example of this is at the very end of The Wolves where backing vocals start to slowly crescendo. The idea of growth and swells here to a create a blanket effect is neat, but the noisiness of the syllables kills the blend and takes me out of the song at a crucial part of the conclusion.

I commend the Penny Loafers for this well-done album. Although the group basically kept the album to one genre focus, there's a good mix of moods and feels to create variety. Indie rock and pop lovers should give this one a listen.

For a physical copy of the CD, email loafmusic@gmail.com with your request. Check out iTunes or CD Baby to purchase online!