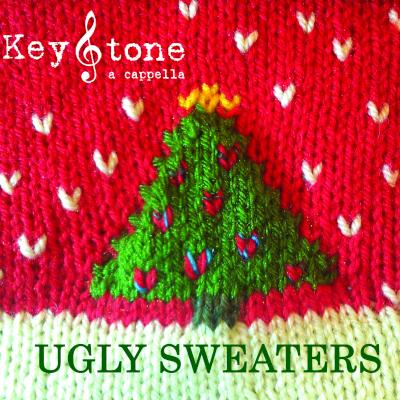 Christmas albums are inherently tricky. Lots of groups eventually release one, and they're great to have in your catalog for an end-of-year revenue stream and festive red bow for your group. But, they have a short service time, and it's hard to keep coming up with reimagined versions of Santa's story for fresh-sounding holiday fare. KeyStone's angle for Ugly Sweaters gives us the classics with a vocal jazz approach, and a sprinkle of charming humor, too. The result makes for a pleasant, light-hearted listen.

The continuum of Ugly Sweaters is uplifting, easy-listening presentations, meant to please the masses, from the beginning to the end. Almost. Who could resist dancing around the punch bowl to such a high-energy version of Rudolph the Red-Nosed Reindeer? Who won't be smitten with the tranquility that opens the second track, with such an earnest lead from Josh Schrager, only to hear the big reveal: this song is about aliens! From the funky calypso beat in Let It Snow to the eagerly anticipated spotlights on the group's bottom-of-a-deep-canyon bass, Joe Gooch, it's a happy-slappy holiday season alright, with individuals who can all rock the solo microphone or blend seamlessly into a power ensemble.

And the humor! The modern wishlist lyrics in Santa Baby with pleadings for a Tesla, an iPhone, and Game of Thrones is a delight. It's fabulous that Frosty gets called-out for being a jaywalking snowman in his tune. There's even a credit in the liner notes for the knitting featured on the album's cover.

Back to that almost. After six bouncy and whimsical tracks, Ugly Sweaters closes with a live verison of It Came Upon a Midnight Clear, which offers a touch of darkness, a slice of tension. It almost sounds like the start of a new album, but moreover, it explores a whole new style that we haven't heard yet on Ugly Sweaters, and suddenly we're longing for more of such variety, more of the light mixed with the dark. That said, wanting more is never a bad way to end an album.

Since holiday albums have a limited shelf life by definition, they can be a risk for any artist — not just those in the a cappella realm. With the EP Ugly Sweaters, though, Philadelphia CAL group KeyStone gives its own creative spin on many overdone holiday classics.

KeyStone's creativity here isn't really much of a surprise, since the group's 2013 holiday single Frosty the Snowman (which I previously reviewed for RARB here) gives a fun, quirky take on the classic tune.

KeyStone continues with the same originality on Ugly Sweaters (which also includes Frosty the Snowman): there's a seamless medley (Let It Snow/Baby, It's Cold Outside), a jazzy take on Rudolph the Red-Nosed Reindeer, a fun cover of a modern holiday tune (Fountains of Wayne's I Want an Alien for Christmas), and new lyrics for an old song (Santa Baby). These aren't revolutionary upheavals of these songs, but it's enough to catch a listener's ear when so many holiday recordings just seem rote and monotonous.

The only track that seems out of place here is the final one, a live recording of It Came Upon a Midnight Clear. The song was recorded live at The Vocal Company's Sled Dog ROC facility  — not live in concert — but the lack of studio wizardry is markedly different from the rest of Ugly Sweaters. On an album full of other live recordings, this track would've sounded great, but compared to the precision of the rest of the album, this song just feels out of place.

Even with one track that sticks out, Ugly Sweaters is still a fun holiday album, as KeyStone gives its own take on these often-overdone tunes in a way that will pique the interest of listeners without annoying Christmas traditionalists. I can't guarantee that it'll please absolutely everyone, but it's definitely an easily-absorbed addition to the holiday canon.

Sure, there are many shopping days left until Christmas. But when the holidays approach, don't forget to put Ugly Sweaters on your list. (Be sure, of course, to specify that you mean the album.) The recent release from KeyStone A Cappella features a healthy mix of the energetic classics and the head-banging obscure to make for a great stocking stuffer.

After an effective and upbeat take on the classic Rudolph tune, I was pleasantly surprised with a Fountains of Wayne cover that I'd never heard before in I Want an Alien for Christmas. The track is brimming with a fun, nerdy charm that features various references to other science fiction themes like E.T. and The Twilight Zone. KeyStone opens the album in a big way with these pleasantly inventive covers.

While innovative, the group's third track seems a bit forced in terms of its organization. Let It Snow/Baby, It's Cold Outside is an interesting enough idea, but fitting both into a calypso beat with breaks for a waltz feel a la Super Mario Bros. underwater music is a stretch. The mash-up is not offensive; it just doesn't make much sense.

The group's next song is a cover of Barbra Streisand's rendition of Jingle Bells. I appreciate the energy the group has in recreating the humor of the original, though I feel that some of the syllable choices could have been stronger — especially in the case of "jut" in the triple meter section, which does not serve voices or instrument emulation particularly well. Despite the fact that I've never personally cared for the song, the background color and texture choices on Santa Baby make KeyStone's cover very enjoyable to listen to. Bass Joe Gooch delivers the updated lyrics with clarity and has a very pleasing timbre to his voice.

Frosty the Snowman is one of my new favorite a cappella Christmas covers and the perfect closer for this album. It combines excellent chord choices with brightness, variation in many verses, and hysterical background lyrics that had me laugh out loud many times.

That, of course, is what I would have said, if not for the inclusion of It Came Upon a Midnight Clear. To include one minimally-produced live track that does not fit with the emotional or literal tone of the rest of the album is a poor use of the closing track's spot. While KeyStone is able to show its live performing chops this way, I'm left feeling solemn and generally unfulfilled after this final track, which is not representative of the entire album and the body of work done by the group.

Despite this ill-advised programming, Ugly Sweaters is an excellent choice for the holiday season. Be sure to share in KeyStone's infectious energy next winter.