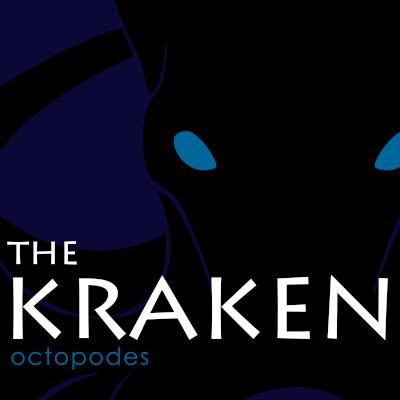 An album of all-original music released by a collegiate a cappella group is like a collection of rare birds: fascinating to behold and inspiring in its rarity, even if not all of the birds are necessarily the most beautiful creatures in the world. Such is the fate of The Kraken from the Octopodes of John Hopkins University — a laudably ambitious effort that impresses in what it attempts to achieve even when its success rate in achieving its goals is mixed.

In the album description on Loudr, the group indicates that the hope was to present "...original tracks of music, all pushing the boundaries of contemporary acappella (sic) as it is known." There can be no question that the music is original but I'm afraid the boundary-pushing moments are intermittent at best.

Indeed, there are two distinct "personalities" (if you will) to the music presented here: the conventional, straight-ahead pop/R&B sound and structure, and a more eclectic, atmospheric, less-structured, more meandering arranging and composing style that could perhaps be called unconventional, or at least atypical (especially in the collegiate a cappella ranks). There are also a fair number of selections caught somewhere in between — unsure of what they want to be — and the result is that sometimes they do not execute either musical vision terribly well.

In the "best of the mainstream" department, there is Wonderful, featuring the lilting, sometimes jaunty, Sara Bareilles-esque alto of Katrina Estep (also its composer), paired with the feathery tenor of Josiah Yiu. The two sound great together, and while this is an extremely straightforward song, the melody is catchy, the voicings and chords have just a light touch of jazz (thanks to Peter Yang's arrangement), and the cumulative effect is a very satisfying original song, performed splendidly.

Repping the "slightly off the beaten path", there is Cosmic Rhythm which lives up to its name, employing an unexpectedly complex rhythmic pattern that is further enhanced by the echo used to great effect. The lyrics don't really stay with you and the melody mostly meanders around a bunch of big block chords without necessarily going anywhere, but somehow the whole package works and it's a nifty and engaging listen. Sandman too isn't afraid to break from familiar song structure and rhyme patterns and is one of the better examples of the group "painting" a bit more with its sound rather than relying on verbalizations of words to establish mood and feel.

Most of the rest of the album isn't bad by any means, but it suffers from certain deficiencies. In many instances, the lyric writing — as is so often the case, especially from new composer/lyricists — leans on banal platitutdes and obvious rhymes. The emotions being conveyed are sincere, I'm sure, but the word choices make them ring hollow or even cheesy at times. In some cases, an arrangement or the passion of the soloist can compensate a bit — see: Take One Step — and in other cases, the blandness of the arrangement only exacerbates the problem (see: So Naive and Untouchable).

A quick note about the production: the group may feel that the neat effects are boundary-pushing, but quite simply, they aren't. What's more, there are instances here — and it's tough to know if it's the composers, the group as a whole, or the mixers David Longo and Angela Ugolini from The Vocal Company who made the decision — where effects seem to be employed a bit too liberally, almost gratuitously. Listen to the treatment of the recognizable vocal moments vs. the textured backgrounds in Kill The Lights and it's almost two different songs — the effect is a bit jarring. For a long time, Tat Tong was the go-to person in a cappella for this sort of electronic sound and whether or not I always agreed with his choices, the composition and the production were always of a piece. Here, I was way too cognizant of the production "bag of tricks" being employed, often seemingly whimsically and sometimes undermining the cohesiveness of a given song.

I do spend a lot of time advocating for original music in a cappella and to see this sort of effort from a collegiate group is fantastic. Perhaps it's unfair to fault the Octopodes for not yet being first-rate songwriters — heck, even with the most popular professional albums, you're lucky if you get one or two real gems at best. So, sure, you could download the "5"s shown in my scores and be done. But if you want to encourage groups to continue taking chances and releasing future Krakens — and I hope you do — consider buying the album nowithstanding its faults so that we get to hear more (and maybe just slightly better) music (and lyrics) from these and other folks in the future.

"Your voice should be one with our sound — together we'll run this town!" the singers demand in Kill The Lights, a perfect meta-opener for a high achievement album. It's a dance track, but moreover, a celebration track, getting the listeners in the mood for The Kraken. Without a weak track or arrangement on the list, with intense energy and group dynamics, the Octopodes put it all on the line here. Particularly compelling: the multi-level construction of Take One Step (by arranger Peter Yang, who also served on the production team and co-wrote or arranged several pieces here), which makes me hopeful Yang will take the post-collegiate aca world by the reins. Also awesome: the spooky-cool a cappella theater piece Sandman, written Yang and Corbyn Yhap, and also arranged by Yang.

The production is as notable as the music it's bringing to life. Certainly not for the a cappella purists with this bass and rhythm section that's often not from this earth, but a must-hear delight to those experimenting with recording technology. Mixers David Longo and Angela Ugolini of TVC give the treatment of each piece its own microphone. Sounding almost cinematically storyboarded in its completeness and evolution, the soundscape on The Kraken is a marvel. But hearing the more vocally-centered side of the Octopodes is also a joy (like the tender takes that build the middle of The Kraken — So Naive, Wonderful [could listen to the duet here all day], and I Won't Wait), because these singers can carry their instruments in their own cases. What a fine line-up of soloists on this release.

As for the lyrics, you'll hear largely upbeat, inspiring, and hopeful messages here: carry on, be who you want to be, we'll make it just fine. Though the writing could be more creative on the rhyme and form front, angst was pushed aside for positive messaging, and this reviewer is glad to hear such a refreshing result.

After the success of Release, I wasn't sure if the Octopodes could push the envelope of collegiate a cappella any further. That is, until The Kraken. The talented production trio of Peter Yang, David Longo, and Angela Ugolini has brought us an elaborate and complex all-original album with The Kraken.

Kill The Lights expertly sets the mood for The Kraken with Joseph Paek and Ben Ackerman's energetic performance. The songwriting and arranging work by Duncan Crystal on Cosmic Rhythm is profound and highly conversational, capturing the nature of the lyrics in exciting, unexpected ways. So Naive is an easily welcomed juxtaposition with Take One Step; Peter Yang's breadth of songwriting and arranging knowledge shines through with the hopeful Take One Step, while Corbyn Yhap's performance on the heartfelt So Naive is both textured and sincere.

Wonderful showcases the songwriting and performance abilities of Katrina Estep, including a poignant duet with Josiah Yiu. Combining these talents with arranging work by Peter Yang, this track serves as an emotional pillar around which The Kraken seems to gravitate. Sandman is a complete change of character following the tenderness of Wonderful and I Won't Wait.

Untouchable features the songwriting and performance abilities of Melissa Jordano, coupled with arranging work by Peter Yang — and they doesn't disappoint. The arrangement is imaginitive, always leaving the listener to wonder where the Octopodes will take us next. Speak is delightfully upbeat and hopeful, being met by the talented performing abilites of Lajari Anne. The Kraken concludes with My Heart Belongs With You, a hidden track that features the 2014 class of Octopodes and perfectly ties the album together.

The Kraken is a superb collection of original songwriting. With this album, the Octopodes continue to prove that they are a force to be reckoned with. I recommend this album to everyone.