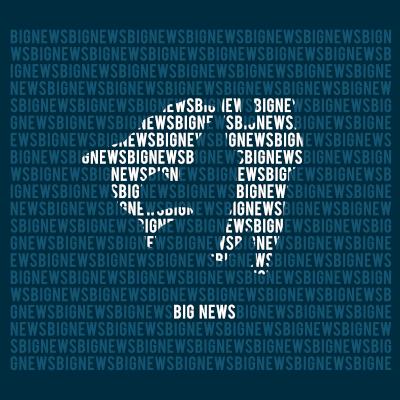 The Bathtub Dogs from the University of Nebraska have put out another solid album.

I'm not sure that actually qualifies as BIG NEWS — as the title of the CD suggests — but it's certainly worthy of note. But it's also worth noting that notwithstanding scores (from me) very similar to their 2013 effort Yao Lissen, this one is somehow a less satisfying listen.

Part of the fault may lie in the arrangements, the vasy majority of which are the work of Josh Huls. That's not to say Huls isn't a talented arranger — he is quite good at times — but as I've noted before, it is the rare arranger at the collegiate level that can churn out arrangement after arrangement of similar material without suffering from a certain sameness of style and/or failing to sustain the inventiveness and creativity over multiple songs. Heck, pro arrangers often have the same issue. The novelty of many collegiate albums is that when the arranging work is spread out among more people (assuming they are all capable), each of them pours their heart and soul into their one or two arrangements. Again, this isn't to say that Huls didn't put forth a strong effort each time out. But the results are a mixed bag — sometimes engaging and fun (Suddenly I See), sometimes inventive (the less-produced vocal moments in Titanium), sometimes diligent (the heavily transcribed but still impressive Can't Buy Me Love), but sometimes way too repetitive and unvarying (Deeper Than My Love), and sometimes bland and uninspired (I Wanna Dance With Somebody).

On a related note, there are some artistic choices that may also influence how much you do or don't enjoy this album. It's not just a question of whether you enjoy the original material. You're not getting the Whitney Houston I Wanna Dance With Somebody, you're getting the Ben Rector version — which to my mind, robs the song of all of it's joy and doesn't effectively replace it with pathos or some other emotion that might make this mellower version more interesting. Even more troublesome for me is the quasi-choral treatment given to Sara Bareilles's Gravity here, which was perhaps brave but falls very short. It's not a faithful cover, but it's also not a re-imagination of any meaningul kind. It's just overdone, overwritten, too loud in several places, too upbeat in several moments, and generally not well conceived, even if it sounds fine.

This leads to a final point, and I feel a bit guilty because this is the second review in six months where I'm taking issue with a choice made by producer Ben Lieberman. To be clear, Lieberman is gifted in the studio, and overall this album sounds very good. One need only listen to the faux-Hammond in Come Around, and the back half of Titanium —  which is more assembled by Lieberman than arranged by anyone — to understand how proficient he is at the console. But there is a tendency throughout this album to place the backs extremely forward in the mix, which at times threatens to swallow the lead (Not Over You); and at other times makes Huls' predilection for aca-syllables a bit too prominent (Deeper Than My Love) and/or robs the song of much-needed dynamic variation (Stop This Train), which is something that the Bathtub Dogs could also generally use more of.

And yet, as noted at the top, this is still solid work. Yes, you could pick up Come Around and Suddenly I See and you'd have the best of what this album has to offer. Perhaps also the Money Medley (tracks nine through eleven) for its ambition, even if it falls a bit short. Either way, if it's not truly BIG NEWS, it still qualifies as "good news" and that's always welcome.

The latest album from the Bathtub Dogs is a mixed bag of emotions. I have all the feels, but I'm not sure which ones those are, or if I'm happy about the fact that I'm having them. BIG NEWS is baffling, bombastic and beautiful all at the same time. So where to begin?

Okay, the good news. These guys are super creative. I mean super creative. Most of the songs on the album have been completely reimagined. After the first track, I anticipated the next to see what they were going to do with it. And for the most part, they didn't disappoint. Josh Huls is the mastermind behind this, having penned eight of the twelve arrangements. The liberties that he took with each of his tracks either got to the simplistic root or turned the song on its head for a compelling shakedown. The jazz of Can't Buy Me Love, the lounge of Suddenly I See, the dub-step of Not Over You — all of it just works! The most expressive and heart-wrenching is that of the stripped down version of Gravity.

Huls is also the soloist on Gravity, and he has me at the first note that he utters. Alone and plaintive, with a hint of musical theatre during the latter half of the song, I sat transfixed for most of the track. At first, I wished that he'd just arranged it as a trio akin to what Basix did with Nothing Else Matters, so that that emptiness and — wait for it — the gravity of his situation could have been expressed in even greater detail. But the backing is unobtrusive, so he makes some magic happen. While he doesn't quite succeed at the climatic note on "down" that is the trademark of the song, he feels it throughout. Kudos.

The creative bits aren't just in the arrangements, but also the production. Production by Ben Lieberman and Bill Hare add some snap and crackle in unexpected places. I actually loved not knowing what was going to happen from one track to the next or even within a particular track. It kept my interest up when other issues ran forward.

Yeah, the tuning and blend isn't the best on this album. Sometimes it's odd intonation. Sometimes it is awkward balance issues and mixing choices. Unfortunately, the auto-tuning doesn't aptly mask the fact that most of these tracks had to be seriously "fixed" in production. That need has brought a lot of artificiality to the album. Everything is so bright and buzzy and with an electric sound. Great, as we generally extol the bright and buzzy in a cappella singing, but this occasionally borders on the painful.

Man, if creativity was the sole factor in determining the overall score for an album, BIG NEWS would receive a "5" hands down, no questions asked. Huls and company placed their stamps on so many of these songs that have to be heard to be believed. But, it's just one of a multitude, and the rest of album is good, but average. And that's a shame because the Bathtub Dogs were really on track for having a killer album. If they keep on working on the singing aspect of these great arrangements, the Bathtub Dogs' next album will really be big news.

BIG NEWS, the latest album from the Bathtub Dogs of the University of Nebraska-Lincoln, is a curious collection of contradictions. The guys sing with frenetic energy but sound a little joyless at times; they choose songs which rely on light, boisterous guitar riffs, but then use arranging options which bog down those riffs; there is ambition in the group's Money Medley (listed on RARB and for sale as separate tracks), but also some complacency with other song selections. The resulting product is an album which is sometimes revelatory and other times is just average.

In the group's previous offering, Yao Lissen, the Bathtub Dogs engaged in highly successful professional collaborations for arrangements (six songs) and production (Dave Sperandio) to produce a slick, punchy, and above all interesting album. With BIG NEWS, the group used a lot more internal arranging, with just one outside chart from Evan Feist (the engagingly jazzy and splashy Come Around). Luckily, group member Josh Huls is a talented arranger and while nothing matches the brilliance achieved by Joseph Bates on City of Delusion and A Little Less Conversation from Yao Lissen, there are some great moments here.

Titanium is a song which has infested the a cappella community over the past three years, so it is particularly surprising to me that Huls found a way to make the Dogs' version interesting. The swirling clusters are great, but the moments of frenzied mania in the second half are the real jewels here. Huls also arranged the aforementioned Money Medley, which takes the listener on a journey from big band (the Bublé version of Can't Buy Me Love, with tight horn licks included) through reflective contemplation (Price Tag/Making Money) before ending on a fluid, climbing version of Counting Stars. When allowed to play as a single ten-minute unit, the medley is ambitious, a little too long, but mostly engaging and satisfying. The arranging decisions are a little less successful with Gravity, where the lush, lazy chords seem just a bit inconsistent with the grooving bassline, and Send Me On My Way is lackluster.

As with his solos on Yao Lissen, Jack Christie steals the show with his leads on Come Around and Titanium. Nick Dahlquist also shines on I Wanna Dance With Somebody. The backing voices are consistently vibrant throughout, achieving the classic feel of a high-energy male collegiate group.

Unfortunately, the production takes a step backwards on BIG NEWS. The sound is clean and crisp but a little airless at times, and there are occasional artifacts poking into exposed moments. The sound also feels a little heavy on some songs (Suddenly I See, Deeper Than My Love) which which require a light, nimble touch to replicate or replace guitar riffs, for example. On other songs, such as Stop This Train, the production works better.

The Bathtub Dogs are a high energy group with some talented arrangers and soloists. With BIG NEWS, the guys have a few top-notch tracks, a compelling medley, and some really fun moments. They also have a few songs which don't quite work as well, an overall sound which feels stuffy at times, and a handful of boring or uninspired moments. As with so many college efforts, the lack of consistency ultimately prevents this from being an excellent album.

Hard copies are available at bathtubdogs.com/store.