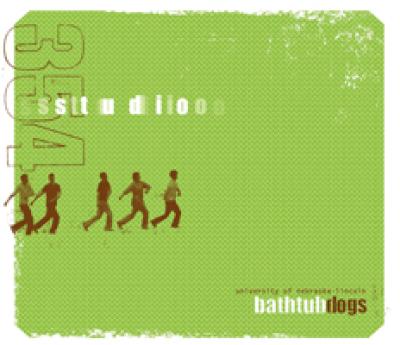 Let's start with what the Bathtub Dogs get just right on Studio 354: energy, blend, backups, the balance of technology and raw human singing, overall fun. Now, here's what the Dogs get impressively close, though not always mind-blowing: creative arranging, song choice, song order, vp. Finally, let's focus on what the Dogs just have to do at least a little better on: leads, leads, leads. Sum it up and even with its flaws, this recording is very likable.

Recording technology is a bit like a visit to Oz's Emerald City. The Wizard's "magic" can make the unimpressive appear awe-inspiring. The more experience you have with recordings, the more you can peer behind the curtain, and like Toto, sniff out the tricks from the talent. Of course only the engineer truly knows for sure.

(An example comes to mind where Freddie Feldman of Vocomotion Studios and I were listening to a singer in his studio that sounded as if he had been heavily auto-tuned. We checked the track: no effects! In actuality, the singer was perfectly and deliberately imitating the sound of the auto-tune effect!)

Still, I'm gonna go out a limb and divine that the singers in the Bathtub Dogs are about average, but that through esprit de corps, hard work, creativity and many hours in the studio (for which the album is named) they managed to put out a significantly better than average recording.

The backups are golden — standout examples of what backups should sound like: great blend, high energy, cool effects. In the biz, we'd say these are great beds. But the leads ... about half are just below average and about half are just above average. And that's a problem.

Sometimes the great song choice for the group as a whole was just not the right choice for the lead singer. Perhaps some singers got their solos out of seniority. Maybe the leads were doled out so the widest variety got their moment in the spotlight. But that's yearbook album stuff. We listeners don't really care about that bit of politicking. We simply want the best voice on the right song. And the Dogs fall a bit flat on that.

One also gets the feeling that they must have known. Why? Because the "beds" are so hot! They knew how to make the "accompaniments" kick ass, pretty much universally on this album. Why not the leads, the single most important part of any track — a cappella or otherwise? At any rate, those issues are largely responsible for the lower scores on an album that could have been strictly in the good and great range otherwise.

There's so much to applaud on this release: great energy, really interesting arranging choices (check the breakdown in Do You Believe in Love? for example), nice production, impressive overall musicality, fun song choices. You can't help but like these guys! And someday, when the leads are shown in the same flattering lighting, we'll see the Bathtub Dogs as the budding rock stars they are.

My friends in the Midwest often express a measure of jealousy over the fact that I was born, raised and still live in New York City. "Nothing ever happens out here", they have been known to complain. "That's just the way it is," they quote Bruce Hornsby. "Some things will never change."

Now I happen to be a fan of the Midwest, but when it comes to the University of Nebraska's Bathtub Dogs, and their third CD Studio 354, they're not doing themselves (or the Midwest) any favors. This is another album sorely lacking in compelling, interesting, successful arrangements. What's more, the energy that was palpable on Outloud in 2006 is nowhere to be found here. All the sampled vp in the world and the wizardry of Dave Sperandio's editing and mixing can't hide that this clean, crisp-sounding album is a complete snoozefest.

That may seem harsh, but really and truly, there's nary a track to be found that will likely raise your pulse beyond a resting heart rate. Perhaps as an intro to basic a cappella for uninitiated friends, this might be a decent place to start. Many of the tunes are familiar, the tuning rings true pretty much throughout, and the solos are lovely enough, even when they betray a smidge of "legit" training behind the rock bravado. But for those who have even a passing familiarity with some of the groups in the upper echelon on the collegiate scene, the simplicity of the arrangements on this album are maddening. With the possible exception of Chariot, there's little in the way of texture or layering of voice parts at all. More often than not, it's bass + vp; add in establishing power chords on "ooh-aah" or in a unison moving rhythm using syllables or words; perhaps, but not always, add a group singing the most prominent melodic instrumental line and then insert solo. Ain't Happened Yet is perhaps the most egregious — whether it's a jazz , gospel or funk groove, this song should cook! There are multiple other offenders such as Because of You and All 4 Love.

Making matters worse, even when the group hits on a syllable, rhythmic, or harmonic motif that is somewhat engaging, it languishes in repeats ad nauseam, sans energy and commitment. The bridge of The Look with all its "gotta gotta get" and "digga digga dums" might have been exciting if the guys didn't sound like they were concentrating too hard or reading the syllables off sheet music. Some use of dynamics would also have helped immensely, particularly in a song like Everything Little Thing She Does Is Magic which needs to explode into the rockin' chorus from the more ponderous verses and build in the final repeats as the soloist riffs on top. Ditto for Falling Slowly which is such a simple song that what is, by necessity, a simple arrangement cries out for some dynamic variation to keep things interesting.

I'm a bit at a loss for what to recommend for the Dogs, because when they went more complex on their last album, they came up short. Here, they've opted for highly polished, slickly produced simplicity and it's not working for me either. Until they can find a little more substance behind their shiny outward appearance, a cappella in their little slice of the Great Plains will continue to remain unchanged.

The Dogs have drawn a tepid, non-bubbly bath for Studio 354, a follow-up to their middle-of-the-road album Outloud. The soloists have pretty limited abilities, the arrangements are either boring or awkward, and the production is largely stiff and compressed. In short, the tap is on, but the water still isn't ready yet.

The strongest critical remark for Outloud centered on its arrangements; specifically, that the Dogs got help from the MIT Logarhythms, the Tufts Beelzebubs, and the Brown Derbies. Since the group was fairly new at the time, the offense wasn't too terrible — better to throw in some proven arrangements, right? Happily, the Dogs seem to have penned all of their own work this time (though the arranger for Kiss From a Rose is not listed).

Sadly, most of the arrangements don't do the Dogs any favors. Every syllable in the a cappella arsenal appears in The Look, and resolving chord progressions with "blah!" isn't the best idea. Do You Believe in Love? (with the exception of the bridge) sounds a lot like The Madison Project's version on Late Night Drive-Thru. Despite a contrast from the verses, the famed angry chorus of Paralyzer doesn't sound nearly aggressive enough. A lot goes awry with Seal's Kiss From a Rose — a soloist who pushes too hard with a tendency toward the flat side topping the list. The big closer, What Goes Around, needs at least two minutes chopped off the end. The best arrangement left standing is Every Little Thing She Does is Magic, a sensitive and interesting interpretation of The Police classic.

With greater expectations from the soloists and some arrangement polishing, the Bathdog Dogs should finally be on their way to making their own mark in the collegiate men's group sector of a cappella.