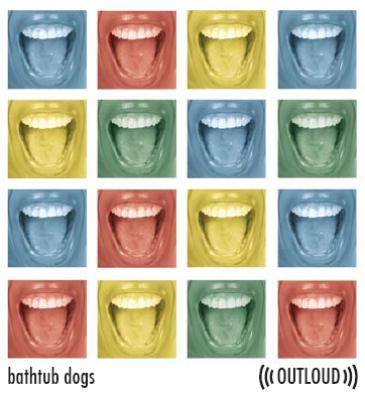 With Outloud, the all-male Bathtub Dogs (from the University of Nebraska, though the school is nowhere to be found in the liner notes) prove the old adage that "less is more". Unfortunately, "less" doesn't always make for compelling listening, and therein lies the problem of this CD.

The more these gents try to do — specifically relating to the complexity and general "busy-ness" of arrangements — the less I cared for the results. The less they attempted to do — ooh-ahh arrangements that repeat over and over with little, if any, ornamentation or development — the better the music-making, but the more boring the listening.

It's really only the final track, Goo Goo Dolls' Black Balloon, that strikes an appealing balance between the two extremes, with an arrangement that has just enough movement, rhythm and texture, without sacrificing blend and a solid harmonic foundation. But for a high tenor line that repeatedly pushes them just a bit out of their comfortable range — an unfortunate tendency throughout this CD — this is probably the most complete track of the lot. The other better-scoring tracks are mostly rather tame, uninteresting repertoire choices. But Roll to Me, despite some tenor issues there as well, has a nice bounce to the arrangement that keeps it fun, and Up On The Roof is pretty much what you would expect it to be, helped immensely by smarter chord spacing/inversions than the group demonstrates on other tracks.

The opening Don't You Forget About Me, prompted a bit of déjà vu since the arrangement is borrowed from the MIT Logarhythms who used it to open their 2004 CD Soundproof. The Dogs' soloist is actually a bit better than the ‘Logs', and the mix showcases the tight, clean, crisp sound that one has come to expect from an album mixed and mastered by Dave Sperandio, which makes for a solid beginning.

But from then on, it's generally either too much or too little. A stretch of three songs in the middle of the album — Freedom, Romeo and Juliet, and Anywhere — have very little in the way of arrangement altogether or latch on to one basic rhythmic structure and repeat it ad nauseum. And at the other end of the spectrum, there is Hangin' By A Moment and Satellite where the tuning suffers for the multitude of rhythms and syllables that never quite gel into a cohesive background block.

Walking In Memphis is something of a synthesis of both critiques — actually, the busy-ness is not so much the problem, as is the insistence on replicating the arpeggios at the top of the song note for note with the piano original, which makes for exceedingly difficult (and often unsuccessful) tuning. Plus the bass line droning in the first verse and chorus actually works against the "feel" of the arrangement and the legato line in the 2nd verse for the 2nd tenors is pretty much lost. On the flip side, the basic block chords in the bridge section ("They've got catfish on the table...") are thoroughly underwhelming and I kept wishing for a little more creative and interesting choice than just hurriedly rushing through this section.

The Dogs definitely have the raw ingredients to be a solid group — an agreeable ensemble sound, palpable energy, pleasant (if not stellar) soloists — but with too many tuning issues creeping into their performance, and arrangements that do not show them off to their best advantage, they also still have a way to go.

The Bathtub Dogs of the University of Nebraska are a young group, founded in 2002, and have a hell of an inside joke (I have to assume) for a group name. Outloud is their second album and a bit of a headscratcher, mixing a few excellent tracks with a lot of mediocre drudge. You could believe producer Dave Sperandio has simply managed to polish up a few cubic zirconia in the rough, but I'm more inclined to think that the Dogs just need to up the ante across the board. Oregon's On the Rocks have shown a young group can quickly leapfrog its elders with a strong vision and even stronger execution, and the Dogs should aspire to do the same. Outloud shows promise, but the group will need to take a real creative leap on their next outing in order to live up to that potential.

The Dogs aren't shy about borrowing from the best. The liner notes reveal two MIT Logarhythms arrangements (the enthusiastic Don't You Forget About Me and B for effort Freedom) and a warbly rendition of Deke Sharon's take on Cecilia. Two arrangements are "inspired" by the Tufts Beezelbubs (Take Me Home) and the Brown Derbies (Romeo And Juliet), a term I take to fall between direct transcription and actual arranging, perhaps closer to the former. Even the excellent original Anywhere owes a debt to Samrat Chakrabarti and Hyannis Sound, with its distinctively textured opening rhythms. But when the Dogs sing these "covers" with such aplomb and energy, it's hard to fault their bringing in some pinch hitters to round out the team.

It's when the Dogs take some tentative steps on their own that the album starts to falter. The opening bass line of Hangin' By A Moment is shockingly awful in pitch, tone, and commitment. Pizzicato verses of Satellite are too strongly attacked, and someone made a bad artistic choice in slathering distortion effects all over the choruses. And most of the solos are just this side of capable, a surprise given the strong background work that graces many of the tracks. A generally overplayed tracklist that reads like a collection of the most arranged male collegiate songs from the past two decades hardly helps. More courage of artistic conviction and some more practice could make the Dogs a group of note, instead of an also-ran.

So Dogs, take a deep breath and think about who you want to be when you grow up — the time's past for baby steps.

The Bathtub Dogs have succeeded in creating a unique name for themselves, but have a long way to go to create a unique sound.

The Bathtub Dogs, new pups to recording, made a seemingly wise decision: borrow music and ideas from the big dogs. There are two arrangements from the MIT Logarhythms, and two more "inspired by" the Tufts Beelzebubs and the Brown Derbies. This is a good way to add credibility, though it does little to establish yourself as contenders in the noteworthy male a cappella field. Another setback comes from the weak soloist line-up on Outloud, where soloists often sound scared, sound like they're concentrating too hard on notes and rhythms, and don't match up to the aforementioned groups that the Bathtub Dogs surely look up to.

On the positive side, the Bathtub Dogs made a good choice by borrowing Freedom. This is precisely the kind of song you want a male a cappella group to sing — it's energetic, it's fun, and it'll make instant fans. Both the arrangement and studio work on Take Me Home are nicely constructed, to the point where the tune sounds absolutely epic. I love the fun, zingy syllables that built strong number Anywhere. I also like the risks taken and merriness of Deke Sharon's arrangement Cecilia, but the voices aren't advanced enough to pull it off. However, the fresh interpretation and dance beat on Black Balloon is as creative and within their capabilities. Though the Bathtub Dogs are struggling to find their own, they've found a few treats to share.