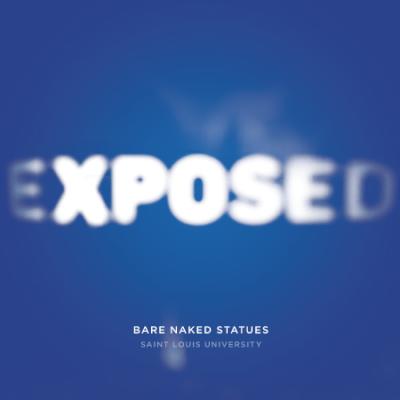 If Bare Naked Statues is not on your radar, it should be. With Exposed, this all-male group from St. Louis University delivers an album with nuance, emotion, and energy.

The uptempo songs here absolutely convey a sense of fun and camaraderie. Let It Roll is a great opener, with some solid dynamics and movement in the arrangement. Similarly, Valerie is engaging and energetic from the first notes all the way through the end of the song. Bare Naked Statues also makes its own contributions to the male covers of female pop songs with the booty-shaking Crazy in Love (which might be my favorite song on Exposed), C'Ma$hup, and Shake It Out, which deserves a special mention for its big, booming choruses.

BNS succeeds just as smoothly with its ballads. When You Were Young is a delicate take on the Killers' rocker, while To Whom It May Concern is a beautifully textured arrangement, which keeps the softer song moving along in addition to its subtle dynamics. And speaking of dynamics, they're what makes Lay Me Down so stunning: the song starts out soft and smooth and might grow monotonous except for the slow, dramatic crescendo that expands over the course of the song. It might seem like repeating the same shtick to have that same slow, steady build on Maybe I'm Just Tired, but Bare Naked Statues executes it so effectively that the dynamics don't feel recycled.

There are still a few shaky moments here. I Believe I Can Fly doesn't really settle in to its arrangement until halfway through; the first half relies on long, extended chords that just don't move or convey enough emotion, and even a stunning solo can't make up for the dragging arrangement. Still the One is flawlessly sung and performed, but a random oldie in the middle of a bunch of pop songs feels incongruous.

Those are minor quibbles. Overall, Exposed is a collection of pop/rock songs that's smooth and easy to listen to, and its strength is enough to put Bare Naked Statues in the upper tier of all-male collegiate a cappella.

Exposed is a fitting title for the latest release from Bare Naked Statues. These gentlemen from Saint Louis University have produced an album that showcases a great deal of raw vocal talent, that's often heard in much of the lead's delivery. Exposed is a bit heavy on the production side, more in regards to a clean, organized sound versus the vocal effects element. While several tracks are easily crowd pleasers, Exposed struggles in keeping a listener's full attention for the entire duration of the album.

On paper, everything on this album works. Plaid Productions does a superb job at producing a full sound with their mixing, editing, and recording efforts. No track is lacking in the production area, and mastering by Dave Sperandio is simply the icing on the cake. EQ efforts are a bit low-end heavy on Let It Roll but it still makes for an enjoyable listen. And arrangements by Tom Anderson (Random Notes) and various members of Bare Naked Statues are robust and lively.

As mentioned, nothing is technically bad on Exposed. Yet, only a few tracks leave a lasting impression. Crazy in Love manages to keep the original driving, upbeat nature intact, but still delivers a dark, subtle energy from the minor chords. The song feels like an even greater juxtaposition between light and heavy than the original, with emotion being derived from the group's dynamics.

Valerie is a fun listen, showcasing an outstanding lead in Maurice Roper, who is part of a select group of men who are capable of handling the Amy Whinehouse tune. There's a good balance between rhythmic and held-out parts in the backing group's singing, which can be attributed to a good arrangement. I can really appreciate the unique take on When You Were Young. It's rooted in a more traditional, choral styling, with plenty of handoffs of the lead between various vocal parts, and has an emotionally reflective nature too, expressed by drawn out words and slow build ups to major parts.

As one who thinks of albums as a whole, it's rare that a duo of songs stand out to me. But this is the case with Who You Are and Maybe I'm Just Tired. The songs work so well next to each other, with Who You Are being somewhat bare initially but eventually leads to insanely intense build-ups. Maybe I'm Just Tired is relaxing from the first measure, with more of a light intensity until the end that's refreshing. How I wish that every track had such a profound feeling to them. Much of the album works well for background music. To be honest, there are some days you just need that, but it's not an everyday desire.

Exposed has plenty of good singing and passion. It's slightly missing that ingredient to fully "move you". Nonetheless, its high points are convincing and worthy of a listen.

Something that reviewers harp on album after album is group energy. Granted, energy alone won't be enough to carry a recording if everything else is going wrong, which is not the case here, but a convincing performance goes a long way. Exposed, the latest from Bare Naked Statues, is bursting with energy, and it just makes every track that much more fun to listen to.

The album kicks off with a Tom Anderson arrangement of Let It Roll, which really sets the bar for the level of intensity you can expect from the other tracks. It's a strong opener, featuring great dynamics, excellent progression in the arrangement, and the type of performance where you really believe the group enjoyed themselves recording it. This leads into my favorite track, Crazy in Love. Group member Jim Kane provides a wonderful arrangement of the Beyoncé hit. While I pretty generally enjoy when male groups unironically perform songs by female performers, it's even more of a treat when a group really commits to making that song theirs. Crazy in Love is the type of gem you hope to hear on every album, and while Exposed is slightly front-loaded with stronger tracks, the second half of the album delivers again with John Holland's beautifully reimagined version of When You Were Young by The Killers.

On an album featuring a number of excellent commissions from Tom Anderson, Kane and Holland deserve a lot of credit for providing some of the best arrangements on the album. The group as a whole, also, should pride itself on the quality of performance on every track, even ones where the song or arrangement don't bring much else to the table. I sometimes wish we had a little more nuance in our scores, because I would say Exposed is a solid "4.5", falling just short of a "5".

While I give the group credit for presenting a solid dozen songs — a challenge for many groups — I think there's still a few areas to tighten up for future recordings. A couple of the songs do need a little something extra to keep them from dragging by the end. I also found the song choices a little confusing, with a number of older songs that didn't get much updating here. I look forward to Bare Naked Statues using Exposed as a stepping stone to even greater things to come.

This album is available on iTunes and Loudr.