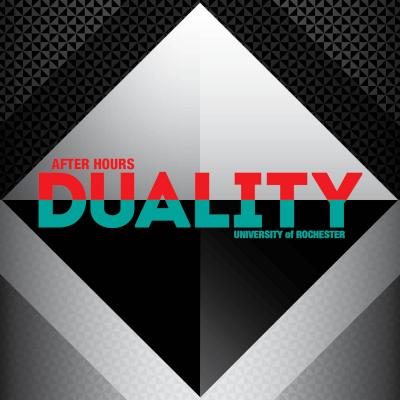 Duality is a shiny pop-rock album by After Hours, the co-ed group at the University of Rochester. On the surface, it's a mix of contemporary and past pop songs — both uptempo ones and ballads — but with a closer listen, there are some nuanced performances and arrangements that elevate these songs from simple pop fare.

It's worth mentioning that Duality is a huge step forward from the last After Hours album RARB reviewed, 2008's The Buffet of Kings. Obviously that's not entirely a fair comparison, since six years for a collegiate group could mean 1.5 to 2 full rotations of group members. But it's still important to note that this is a group that has kept up with the times, from enlisting experienced engineers to help with recording the album (David Longo and Ted Trembinski, alongside members of the group), to writing some beautiful arrangements (all arrangements on Duality were penned by members of After Hours). Ethan Lobenstine's arrangement of Samson gives a breath of freshness to a song that was overdone a few years ago, and Michaela Reichert's bell-like solo is sweet and tender.

Too Close starts the album out on a great foot with lots of energy around a fully engaged performance. The group switches between uptempo numbers and ballads seamlessly, never letting the overall energy of the album lag too much. There's even an original song here, Alex Murray's Place to Fall, which is good other than a few distracting "ba-da-da" syllables in the backs.

What After Hours has given us here is a good start, but overall, I just want more from the group. I want to hear the dynamics pushed even farther, especially on Scream and Blown Away as a whole and on some of the backs on One Sweet Love, which seem a little repetitive after a while. I love the Lady Marmalade intro to Wings, but I want to hear more of the men in this arrangement; the recording sounds a lot like many of the all-female versions we've heard in the past few years, and I'd like to hear After Hours' different co-ed point of view. Still, Duality is a really solid addition to After Hours' discography and to the greater world of mixed collegiate a cappella as a whole.

After Hours' Duality is a well-polished product. All of the vocals have a sheen and blend that keeps cohesive and fluid. I'm not the biggest fan of "jen-jen" arrangments, or mimicking instruments to a tee, but After Hours won me over on a few such tracks thanks to their seamless execution and well-balanced group singing. The few misses here and there prevent Duality from being the slam dunk it wants to be, but it's still an entertaining offering and a great example of what attention to detail accomplishes.

Too Close opens things up nicely. The backing vocals and soloist have a healthy relationship in balance and volume. The percussion beat is crispy, the obligatory dubstep breakdown segment isn't too over-the-top (luckily), so what's not to like?

I had high hopes for Bad Religion. If you're anything like me, you've been waiting a little over two (three?) years for that new Frank album. So maybe After Hours could tide me over with a fresh take on a new classic? Well, not exactly. My beef with Bad Religion is that it doesn't seem to understand the impact of its source material. All the ingredients are there initially. The entrance is smoky and quiet, a great place to grow from. The soloist has a rich tone and a remarkably subtle touch on the vibrato, but somehow things don't quite come together like they should. The song doesn't move anywhere. The angst and tension are missing and without emphasizing the power in some of the lyrics, most of the words fall by the wayside. Bad Religion sounds beautiful — it's pretty — but it's missing its guts.

Samson is great. It's warm and colorful and a great example of the vocal "sheen" that comes through on After Hours tracks. This arrangment is simple and soft, but it gets the job done with dyanmics and cohesion.

Wings is my favorite song on Duality. The energy is consistent top to bottom and the blend on the descending harmonies is terriffic. The swells, pauses, and accents excentuate the the backing vocals and everyone takes full advantage of the song's highest points of rising action.

Place to Fall picks up right where Wings leaves off. Excellent dynamics and embellishments, and a clear destination and desire for some kind of growth as the song moves along. The background "badada"s are catchy and blend nicely. The chords are tight and the background also meshes nicely with its soloist.

Group execution is the bread and butter on Duality and its ultimately what makes the release a winner in the end. I say go check it out.

As a whole, Duality frustrates me. It frustrated me the first time I listened to it, and after what must be a dozen listens, the frustration still lingers. The Rochester co-ed group put forth a great effort as the sound quality is comparable to many top a cappella productions. The overall quality of the arrangements presented is quite good. Therefore, when it came to scoring this album, I found myself giving ratings that more closely reflect that After Hours still has some growing to do to achieve the highest marks. The major problem with Duality is that while After Hours has a lot of energy in its sound, the ability to control the sound is inconsistent.

To me, it's rather obvious when the group is really excited about the music being performed. For example, in the first two minutes and twenty seconds of Too Close, everyone is invested in the slick groove. The sound is a very particular type of dark and edgy that I rather enjoy. The volume is quiet, but driving forward. Everyone seems really invested in selling the song and its soft intensity. However, those last forty-one seconds are the victim of an unfortunate change in energy. Without warning, an almost inhuman noise (a scream, perhaps?) appears, and the arrangement becomes much choppier and significantly more obnoxious. The energy of the group changes at the drop of a hat. This problem could be fixed by changing the drive in energy before it ever falters. The biggest moments in a song don't begin when that big chord hits; they begin a few measures before. If the change in energy is anticipated, that big moment can result in a blissful musical climax. If not, the audience gets a smack in the face that leaves a bad taste in their mouth.

Not all energy has to be loud and proud. Samson is a really cool example of this. The first half of the praise has to go to arranger Ethan Lobenstine, who made some absolutely killer decisions about the sounds that are presented. The second half of praise goes to the full group. Even the quietest vowels and syllables have energy. Everybody is on board for every second of the track. Every quiet moment is calculated, and the group is constantly aware of everyone else. It's not an easy task, and sleeping on the job results in either somebody sticking out or the song accidentally becoming more dirge-like. However, with everybody maintaining energy and focus, the audience is greeted with a moment such as the one around the three minute and twenty second mark, a perfectly executed series of slightly dissonant chords that are like chicken soup for the music lover's soul. Lobenstine put the notes on the page, but an arrangement can only be as good as the group performing it, and After Hours certainly knocked this one out of the park.

Countering this, what happens if all the energy for a number is loud and proud? That's where a track like Wings comes in. On the surface, there's nothing wrong with the presentation of the song. It's your standard relatively recent Top 40 party anthem. The song is musical encouragement for the audience to get up and dance, and I'd be lying if I said I didn't get up and dance to it at least once while listening to this album. However, by the time the second verse comes around, I found myself begging for a change in dynamics. It's pretty noticeable to me that After Hours definitely likes this song, as the energy is constantly driving the song. However, energy doesn't always mean loud. Energy can be soft, and it's this soft intensity (like in Too Close) that will really drive home the point of the song. There's nothing wrong with a party anthem, but a party anthem with minimal dynamics to offer can still be musically boring.

It's clear that After Hours put in the time to prepare for this recording, and in the studio, and even the production (two group members are listed among the recording engineers, and three among the production team). The arrangements are quite good, including an original song (kudos to Alex Murray for the creation). There are no fundamental problems to fix; the energy is just inconsistent. Overall, Duality is a strong album, but this energy issue causes the release to come up a little short of top marks.

Duality is available on Loudr and iTunes.