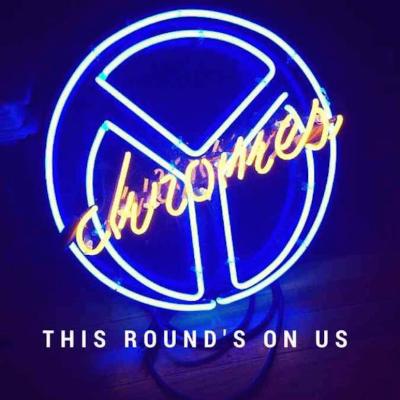 The YChromes from the University of Delaware deliver an entirely pleasant recording with This Round's On Us. That sentence may be the definition of "damning with faint praise", but hear me out: This Round's On Us is a well-recorded, easy-to-listen-to collection of songs by this all-male a cappella group. Every song here has momentum — that may sound like a low bar to cross, but the fact that nothing drags on this album is truly commendable.

The YChromes occupy a space somewhere between "better than average" and "good". There are moments here that sound truly remarkable: the percussion on Wagon Wheel sounds like the clip-clop of a horse's hooves, and that both propels the song forward and gives it a slightly twangy vibe. The lushness and reverb-drenched apreggios on Mirrors are enough to make this listener forget that she's heard too many versions of this song already, at least for the first half (I say "first half" because by the time the bridge comes along, you feel as though you're trapped in an unending parade of the song's chorus). The simplicity and engagement of Day That I Die sounds as though the song was arranged around a campfire on a weekend retreat, and that's a good thing: the YChromes sound like they're having a blast on this song, and the focus from every member of the group really comes through.

The problem for the YChromes is that those moments of "good" are just that — moments. I wanted to hear more "wow" across the album. Hey Brother moves, and everyone's engaged, and there are some dynamics, but I wanted more: more louds, more softs, and more to the song so that it doesn't feel too repetitive. What Is Love sounds dreamy and ethereal but ends the album on a whimper. The other bookend, Sweater Weather, isn't as much of a bang as the YChromes could have made to kick off their album. Song selection certainly factors in as well, as many of these songs are a bit repetitive, and there just aren't enough dynamics to make these songs truly memorable.

All this makes This Round's On Us an enjoyable listen but not a memorable one. There's enough here to show promise for the future, but unfortunately not enough to make this an album I'll come back to.

This Round's On Us is an average album from an average male collegiate a cappella group. At its best, it's finely-tuned and cleverly-arranged. At its worst, it's a tedious collection of nondescript melodies and unconvincing performances. Most of what the YChromes have to give falls somewhere in between.

The best is the multifaceted arranging. The backgrounds on every song flow from harmonizing the soloist to echoing one another, from voweled block chords to syllabic layered riffs, from stillness to motion. The group even pulls off smooth, dramatic tempo changes in Sweater Weather, Day That I Die, Hey Brother, I'm the Man, and Wagon Wheel. Where other groups might rely on heavy percussion and studio magic to fix their arrangements, the YChromes have figured out how to carve a natural balance between percussion, backgrounds, and the soloist.

The worst is that the balance as a whole is disappointingly lackluster. Despite the dynamics built into the arrangements, most of the singing is monotonous and glum. It drags down the block chords on Sweater Weather, I'm the Man, and Overjoyed. It sounds even more laborious when the backgrounds take over for the soloist on lyrics. The end of Mirrors, the end of Hey Brother, the bridge of I'm the Man, the bridge of Wagon Wheel ... it's ubiquitous. No matter what angst or ardors is in the lyrics or what upbeat or uplifting rhythms are in the percussion, the YChromes just come across as shy.

It feels like waiting. Mirrors, I'm the Man, and Overjoyed take the longest. Sweater Weather is still mid-tempo, but has some cool production to keep things moving. Wagon Wheel and Day That I Die are fun in a simple country sort of way. Hey Brother is the only track where the YChromes seem to wake up and have genuinely connected with the melody. The weak singing, coupled with basic mixes, casts a softness over This Round's On Us that is never offensive, but is rarely ever captivating, either.

Until What Is Love. In an otherwise ho-hum album, The YChromes save the best for the last. Yes, it's that '90s dance sensation you can't get out of your head. However, this arrangement is based on the more recent super-slow, super-somber Jaymes Young interpretation. The notes are artistic, the YChromes' mellowness is fitting, and the climactic cascade is flat out gorgeous.

Somewhere between the best and the worst, this is an average album. The arranging and the sonic blend stand a little above average, while the energy and uniqueness lie assuredly below. If you've already got your favorite male collegiate a cappella groups, you might not jump when you hear This Round's On Us. As the YChromes develop more conviction and a more signature sound, that's an offer you won't refuse.

Consistency is the key word for the YChromes' 2015 release, This Round's On Us. It's a brief, concise experience, but it's cohesive thanks to careful planning of the moods and genres in the selection.

What the YChromes have working for them on This Round's On Us is a great understanding and sensibility for the selected genres. The majority of the album is based in a folk/country setting that's rounded out by some solid pop hits. It's in the folk and country based songs that the YChromes seem to find themselves at their most creative and inspired. Day That I Die is an example of this strength: the backing vocals show a real relationship with the soloist as they consistently match his intensity pound for pound. The vocalists swell to create growth for extra volume at the peaks and also shrink to create space and quiet at times. The vowel and syllable shadowing by the backing vocals is also a nice touch to help create cohesiveness. The soloists do a great job of trying to recreate the subtle country vibes without implementing forced accents or twangs to their voices. The same recipe seems to be followed throughout Hey Brother, I'm the Man, and, of course, Wagon Wheel.

I wasn't sure what to expect when I saw What Is Love on the track listing, but I like it. In keeping with the more mellow tunes and energy on the album, the YChromes' version blends right in, repurposing the fist pumping/head banging lyrics and melody for a ballad. It's soft, choral, and exposed, but the intensity level and conviction of the voices make it one of the oddly intriguing tracks on This Round's On Us.

With a clearly thought-out, focused idea for style and a particular sound, the YChromes have done a lot with a little to create a cohesive, laid-back album.

This album is available to stream on Spotify, as well as for sale through iTunes and Loudr.