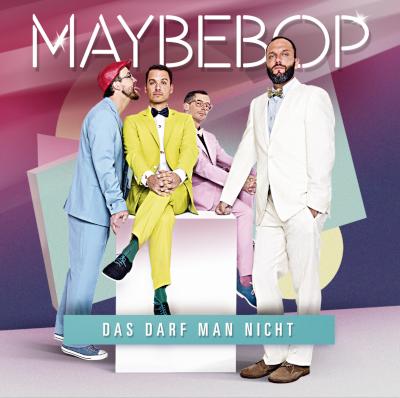 Maybebop has established itself as one the world's greatest a cappella groups and this may be the group's best album yet. Effortlessly musical, inspirationally prolific, and joyfully original, this German contemporary ensemble is all that, and masters of the increasingly elusive "perfect balance" between naturalism and technology. I could not recommend Das darf man nicht more highly. It's a masterclass in arranging, writing, phrasing and maintaining a signature sound, even while boldly traipsing through multiple styles: from hard rock to swing jazz to pop and back! What's not to love?

As always, since most of our readership is made up of English speakers, it's appropriate to warn that only three of the eighteen songs are in English; alles andere ist Deutsch. The songs are surprisingly fun to listen to even if you don't speak a word, though — a testatment to the group's musicality and emotional phrasing. But if you do speak German, or if you're willing to check out the translations, there's lots to delight in: phone addiction, how to "theoretically" become rich, issues in choosing a religion before you die, to the right curse for the right occasion. Never a dull moment with Maybebop!

There's still a little time left for other submissions, but for now this is easily the best album of 2015. Buy it and thank me later. (In German!)

If not quite as much of a home run as I've become accustomed to with Maybebop albums, Das darf man nicht at least hits a triple. It's full of the same wonderful "pop with a twist" style that fans know and love, and has enough interesting things going on that people new to the group will also love it.

Maybebop, as all a cappella aficionados should know, is an all-male group from Germany that does mostly original songs. The only cover on this album is the German national anthem, Einigkeit und Recht und Freiheit, and even though the melody isn't original to Maybebop, the group puts its own spin on it by turning it into a parody. The singers start off mourning that they are not Italian, French, British, or Spanish, because Germans have much more to be ashamed of. But, by the end, it recognizes that they do after all also have things to be proud of! Such as freedom, bread, punctuality, mountains, lakes, and beers.

The album includes twelve regular tracks, one remixed track (Ich seh dich [pop mix]), two iTunes bonus tracks (Mach es morgen and Zuvielisation), and three English tracks that are only included on the US iTunes version of the album. Those three songs, No Regrets, Anthem, and Fortress, are English translations of three of the regular tracks (Es war gut so, Deutschlied, and Festung, respectively); they employ the same backing vocals and just have the lead vocals re-recorded in English. And I have to say, all three English translations are superb, getting not only the gist of the songs but also the poetry — far superior than many Maybebop English songs I've heard in the past. Maybebop's English pronunciation is also quite good and has substantially improved from past albums.

Three songs on the album stand out to me. The first is Es war gut so (in both German and English forms), a pop/rock effort with a driving beat, killer melody and soloist, and well-chosen bass and harmonies. Next is Angst vor dem Tod (Fear of Death), which uniquely alternates between Gregorian chant, modern-style accompaniment with bass and vocal percussion, and something else that's almost operatic. It discusses life after death: "My list of sins is rather long. I'm afraid of death, what if I find myself in the pit of Hell? ... I stand before [various deities]. They court me 'because this is about nothing less than your very existence. You are afraid of death, what do you think will happen to you then?' I think I will simply rest in peace." [All translations done by the author.] The third is Ich seh dich, in both unplugged and remixed forms. It's a tender love song: "I see you, I see how perfect you are and how you drive the darkness away. I see you. Nothing more comes in between us; infinitely more will happen between us." The unplugged version is slow and soft, intimate and beautiful. The pop remix is also beautiful, but with added bass, vocal percussion, and electronic effects in the pop style. I give the pop remix an edge, but just barely.

Another song of note is Sex in der Ehe (Sex in Marriage), a song about an aging couple that is surprisingly tender ("My belly has grown and I'm no longer buff; I wonder if you still like my body and you're probably asking the same. If so, I'll gladly show you that you're still the most beautiful girl."). The music unfortunately is a bit repetitive and not as interesting as the lyrics. Das darf man nicht (That's Not Allowed) recites a list of past mistakes in a rock song with periodic high vibratos: "I slept through the whole day. I didn't separate my trash. I told a blonde joke. Sat in the handicapped seat on the bus. That's not allowed!" It made me laugh out loud when a heavily American-accented version of the "Das darf man nicht" phrase appeared out of the blue in the middle of the song. Festung, with an English version as mentioned above, features a bass solo and uses a bagpipe sound to tell the metaphor of a lonely person sitting in his gray fortress, surrounded by other people each in their own fortresses as well. Fluch gebucht (Book a Curse) is a jazzy song about cursing that musically isn’t especially my cup of tea, and unfortunately includes a barrage of curse words (including in English); the combination gives rise to my lowest song rating of the album. Musically it’s probably more like a '3' or low '4', but because the litany of profanity (including English words) makes it unlistenable to me, I'm lowering the rating to a '2'.

I highly recommend the album despite a few failings. English-only listeners will particularly enjoy the three songs at the end but even though the rest of the album is in German, there's still a lot to enjoy musically. Also, Maybebop puts all of its lyrics on its website, so you can even copy & paste into Google translate (as I did a few times) to help get the full Maybebop effect.

Maybebop makes me irrationally angry. So irrationally angry that I find it impossible to write this review without expletives. In recognition of our more sensitive readers, I will substitute "bop" for any uncontrollable outbursts.

Maybebop is one of the best songwriting vocal groups on the planet, and may very well be the best. Somehow, the group manages to find new ways to surprise on each album, offering such a bopping wide array of successfully crafted songs that it boggles the bopping mind. I mean, how does a group pull off epic rock ballads, faux bossa nova ditties, and even hip-hop inflected pop with equal success? Are you bopping kidding me?!

Sorry, lost my mind for a minute. The truth is, the strength of Maybebop's hooks are matched only by the rock steady foundation over which they flourish. This is no small feat, as few groups can match Maybebop's hooks and even fewer can weave such solid pop song structures. Nobody else does it across the vast chasm of styles which Maybebop traverses. That's just bopping unfair!!

What makes it even more infuriating is that the group's singing is always so bopping good, and the production (mixed by Bill Hare here) can often be fairly described as bopping perfect, or close to it. Hare's work on Das darf man nicht is warm, inviting, and transparent, except when it is dark, ominous, and growling. In other words, the production effectively matches the soundscape for each of Maybebop's excellent bopping original songs.

I know, I'm gushing in anger, but what else is one to do with such delightfully crafted songs? Baritone Oliver Gies is credited with much of the songwriting and all of the arrangements here, so let me direct my "anger" at him. Mr. Gies — your music remains impossibly catchy and well-constructed. Es war gut so is a classic rock ballad, instantly familiar and yet somehow uniquely Maybebop-ish. What makes you think a charming effort to reinvigorate marital relations, such as Sex in der Ehe, one which would be right at home on a romantic comedy soundtrack, will win over any wedded listeners?! And then you have the bopping audacity to follow that tune with the immensely touching Ich seh dich? Bop.

As with prior albums, Das darf man nicht has its share of humor, drama, whimsy, adventure, and perhaps a touch of existentialism. As with prior albums, it all sounds great. So great, in fact, that every time I press play to start listening to the album again, all that anger melts away, leaving a monumental block of admiration, respect, and appreciation. If Mr. Gies or other members of Maybebop are still reading, I have just one more thing to say — please don't stop making inspired, entertaining, musically generous and rewarding music. I'll try to work on the anger thing.