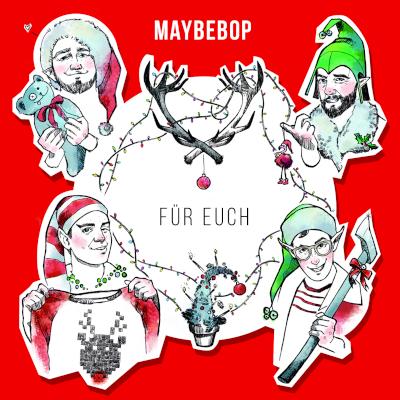 Maybebop has a discography nearly unmatched in the world of a cappella music. Prodigious, musical and impressively original, this German quartet has earned a place among the greats. Even their studio production is universally excellent. Here they turn their talents to Christmas. Für Euch is at times cute and at times introspective. It's always well sung, and with just a few exceptions, it's all in German. If that sounds like your kind of holiday, then you've come to the right place.

Google Translate doesn't quite do all the lyrics justice, so if you aren't a native speaker of German you may find yourself leaning a bit more heavily towards to the more musical of the tracks rather than what might have been the funniest of them. Sometimes Maybebop infuses musicality, creativity and storytelling into the entirety of the song, and when they do it's pure delight. At other times, the naked storytelling isn't quite enough for excellence without the group's full trademark musicality.

Standout tracks include an unexpectedly jazzy ride on Joy to the World, the breathtaking phrasing on Wir sagen euch an den lieben Advent, and the intense and elegant guest appearance of ONAIR on Be Still My Heart.

At the other end of the spectrum is the out-of-character, Jamaican-styled strains of Mary's Boy Child. And I do mean strains. It's unclear how this track made the cut, but it's best skipped.

That's an aberration in a sea of strong material. Maybebop tells stories of the gods hanging out, of celebrating Jesus's birthday and exchanging gifts, of craving a new Christmas carol to reflect our modern knowledge of ancient times, of the Christmas miracle that more people don't accidentally kill themselves, of the annoyance that was the road trip of the three wise men, and so many more tales.

While not Maybebop's strongest release, its scattered gems, which are still more plentiful than most, are as brilliant as ever.

Now this is a Christmas album I could listen to all year. It has everything. Prog metal? Yup. Reggae trance? You bet. Masonic Hindi? Sure! There are a few hymnals and a gospel number more reminiscent of carolers in fur coats and snow boots, but the whole package of merriment and artistry is way too good to save just for December.

Maybebop is a male quartet based in northern Germany that has been around since the early '90s, and together in its current roster since the early 2000s. Most of their music is sung in German, with only three of fourteen tracks on Für Euch (translation: For You) sung in English. Whatever you do, don't let that stop you from digging into Maybebop. This group has gotten nearly perfect scores on all eleven albums they've submitted to RARB over the past decade, and Für Euch makes twelve. These guys are phenomenal.

What is phenomenal about this particular album is how the track listing is so eclectic and yet so cohesive. It glides effortlessly from the ethereal Es Kommt Ein Schiff Geladen (translation: A Ship is Coming Laden) to the comedic Happy Meal (complete with trombone, muted trumpet, and castanet sounds). Even within songs like Mary's Boy Child, Adventskalender im September (translation: Advent in September), and Joy to the World, Maybebop bops all over the musical spectrum without ever feeling lost or forced. By balancing eight upbeat tracks bursting with enthusiasm alongside six choral tracks floating in serenity, Maybebop manages a pacing that makes it exceptionally easy to listen to Für Euch cover to cover.

It's not often you get an album where every song is something you've never heard before. And I'm not just saying that because it's in German. Even Joy to the World, one of the most ubiquitous Christmas melodies ever, is new and exciting thanks to the talented arranging of Oliver Gies. It's not just the words or the melodies that are novel; it's the charisma behind them. The arrangements by Gies are not cut from a mold that just any group could perform. The production by Lukas Teske is not sterilized and compressed to fit in with the radio hits. The soloists are not soaring through the stratosphere or crooning through snazzy riffs. These guys don't sound like they are trying to be anybody else. They are just doing their own thing, and their own thing happens to be very clever, precise, and downright lovable.

I admit, if you speak German there might be a few too many Christmas references to listen to this album in July. In that case, I highly advise checking out Weniger sind mehr, or Extrem nah dran, or Endlich authentisch. If you don't speak German, put Für Euch on your wish list and get ready to indulge in some of the finest holiday music a cappella has to offer!

I've never been a huge advocate of holiday music. Frankly, there aren't that many songs to choose from that are viewed as holiday songs. Eventually, virtually every holiday song begins to feel overdone, and it feels like the holiday keywords become triggers for aggression. When you add the challenge of trying to sell the soul and energy of the music while singing in another language, Für Euch is destined to be a struggle for even the best a cappella groups. About thirty seconds into the album, I came to two possible conclusions: either I've been listening to the wrong holiday music, or Maybebop is composed of divine beings that came down to deliver glorious music to us mere mortals here on Earth.

Für Euch pushes the envelope of what you think is possible. The depth of the arrangements hint at the group being significantly larger than four people. The presentation of these songs is top-notch, with styles ranging from the sincere ballad Der alte Mann, to the power rock Adventskalender im September, the reggae-inspired Mary's Boy Child, and constantly changing at the drop of a hat. However, the most terrifying facet about this album has to be that it feels like holiday music, regardless of the language used. Mind you, it's not all that hard to envision the holiday music when the song is Joy to the World. However, Maybebop still sold the holiday feeling on Das Programm zu Heiligabend, capturing the excitement of a Christmas Eve movie marathon on television. I didn't know it was possible to sell a story in a foreign language as easily as Maybebop does it, and that alone is amazing.

Maybebop didn't magically make me a fan of holiday music. However, the group does sell me on loving this album. I encourage all owners of this album to try this: when the weather gets a little gloomy and some form of water falls from the sky, be it rain or snow, put on this album. Sure, you may find yourself skipping over the tracks that expressly mention Christmas or the holidays, but the beauty of this album still remains. The range of emotions remain. I plan on testing this theory in February. A little holiday cheer without all the classic keywords is a refreshing change of pace, and Maybebop delivers it fabulously.

Für Euch is available for sale on iTunes and at the group's online store.