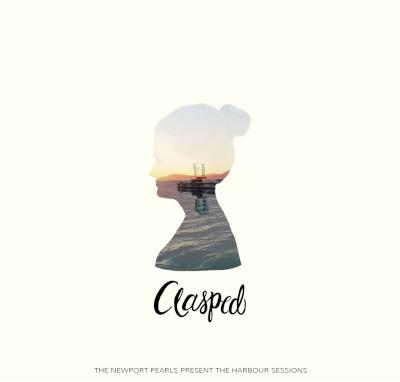 Two clichés are coming at you right from the jump. Where have the Newport Pearls been all of my life? And apparently the third time's the charm. Clasped: The Harbour Sessions is the third album by this female a cappella group hailing from Christopher Newport University. And (wo)man, is it a treat. It's refreshingly brisk and full of life and vim. There's a few pieces of grit sprinkled throughout the album, but those pieces just make those other priceless gems all the more worth it.

The first thing you'll notice behind the lustre of the Pearls' album is the passion with which they tackle each of the tracks. There is something magical happening most of the time. And that magic is simply commitment and conviction. Each note, each phrase, each piece of diction uttered and dynamic attempted is thoroughly vested by each of the singers. Or at least that's how it seems.

Smiles, I'm full of smiles. Like a proud papa seeing his daughter's first steps, or a first ace, or a valedictorian speech, for some reason listening to this album makes me feel proud of this group. I have no idea why, but almost every moment (save You Give Love a Bad Name) made me feel like my heart was full to overflowing. As a reviewer, I sometimes think about what the recording sessions must have been like while producing this album. Ain't nothing but a party going on here. There is utter joy being expressed and it's palpable. Clasped is full of music that you actually feel as a listener. While the tracklist may seem full of current standards, when sung this well and infused with such charisma, you won't care. It's like hearing these songs freshly cracked and shelled. Not quite raw, but nothing's going to make you sick.

There is nice balance throughout the songs in terms of tempo and style. The ladies are much more adept at handling the uptempo songs, which is unusual but laudable. Wings is an absolute blast. I never thought I'd like a version as much as I do the Sil'hooettes' version, but the Pearls are just as engaging. Spectrum electrifies — from the amazing solo by Molly Johnson to the energizing backing vocals. Here, arrangement and production have melded into the perfect union. Arranger Braden Pierson crafted the best skeleton for the female voice. The "lack" of thumping bass is an afterthought as the arrangement utilizes the strength of the singer to make everything more interesting. Colin Adams of Starry Night Studios created a sonic space that blossoms with power and Dave Sperandio of Vocal Mastering added his deft touch.

There are only two issues with the track listing. The group shouldn't have included both of the mashups. Heartless is better both conceptually and in execution than the Counting Stars/Timber mashup, with a lot more theatrical and melodic structure. And Spectrum is a much better closer than the fun but only functional Ain't It Fun. Spectrum just leaves a stronger impression on the listener.

I'm a fan. Buy the album. Support great female a cappella. These Pearls are definitely worth the price.

Clasped: The Harbour Sessions has my favorite album cover of the year but presents music that's harder to love. With issues at the tracklist, intensity, and arrangement levels, the Newport Pearls don't give listeners enough opportunities to connect with their songs.

The strong choral sound from the ensemble means the Pearls must choose their repertoire with extra care. Bon Jovi (You Give Love a Bad Name), and all manner of big-hair rock bands, is really hard to pull off with a choral sound. I've heard it done successfully as a gospel-esque number, which would probably work here given the bevy of beautiful voices in the Pearls. Instead, the aimed-for edgy rock vibe is given through abrasive syllables, which rarely goes well in any a cappella song, except in short, explosive bouts for texture. This arrangement often sounds hollow as well, which just won't fill the room/the auditorium/the headphones the way that big-hair demands, even if you add thickeners through the engineering. In contrast, the Pearls made a really smart choice with Wings, as their choral sound creates a powerful female anthem.

More vulnerability would be welcome in future Pearls' recordings, like soaring ballads with heartfelt, heartbroken leads whom you can identify with because you've known a relationship like that. Or backgrounds that pulse with energy and excitement on uptempo numbers, coupled with brave soloists going all-out in their performances, making you instantly happy each time the Newport Pearls' version of the song starts. The weakest presentation for emotional conviction from the group at large is probably One More Night, right out of the gate. The strongest in this regard, which not surprisingly ends up being the strongest track on Clasped, is Won't Let Go. For the first time, on track ten, we hear it all line up for the Pearls: a beautiful, dynamic-driven solo by Megan Buhmann who creates an enchanting space for the listener to step into, or get lost in, with sensitive backgrounds supporting her lead line. Here, the Pearls have finally given us something to cling to and come back to.

Many of the arrangements could use editing, too. Shake It Out is broken into three soloists, which is hard for verse cohesion but does sound good when the trio sings together. However, the choruses are very unbalanced, and the loudest voice isn't on the melody. Counting Stars and Timber is an unfortunate pairing, as the tempo is too frenetic and there aren't enough common components between the pieces, giving the song a sectional, disjointed structure instead of smooth combinations. Fuller album credits would provide more clarity and feedback opportunity for the arrangements, too; only three tracks list (male) arrangers.

In summation, the Pearls have lovely voices, but the seas are choppy for Clasped.

The Newport Pearls sound prim and proper on Clasped: The Harbour Sessions, as if they're too worried about hitting the right notes to let loose and feel the music.

That restraint would work with the right repertoire, but the pop songs that the Newport Pearls have selected here just scream for a less formal approach. There's no soul in Problem, making the mid-song rap seem really stilted and forced. The Pearls sound sweet on One More Night, You Give Love a Bad Name, and Ain't It Fun; these songs need more attitude and oompf to be convincing.

Part of the Pearls' issue is the balance of their sound: they're an all-female group, but even so, their blend is extremely soprano-heavy. There's no part breakdown in the liner notes, so it's unclear if the group has any Alto 2s, but a little more low-end would go a long way towards giving these songs a less shrill and choral sound.

There are moments here where the Pearls' light, airy tone really works. The beginning of Shake It Out is gorgeous. Even with the inexplicable switch in soloists, the first minute and fifteen seconds shimmers with its sweetness, and the layered harmonies add a beautiful depth to the song. The Pearls' cover of Rascal Flatts' I Won't Let Go (credited here as simply Won't Let Go) is probably the best all-around song on the album. Soloist Megan Buhmann has a rich, tender lead, and the simple, choral arrangement works well with the group's sound. If the group keeps its current blend and tone, more songs like this would be a better fit than some of the sassy, soulful, attitude-laden songs the Pearls have chosen.

The Newport Pearls have an unfortunate poor match of tone and song choice here. Going forward, the group will either need to pick songs that fit its sweet, choral sound, or adjust its sound to fit the style of songs the group has chosen here. As it stands now, though, Clasped: The Harbour Sessions is unlikely to be appealing to those outside the Pearls' audience of immediate friends and family.

For physical copies, email the group at newportpearls@gmail.com.